Closing the Loopholes in MRI Safety

When ferromagnetic objects enter an MRI suite, they become a serious hazard — here’s how to prevent them from getting in 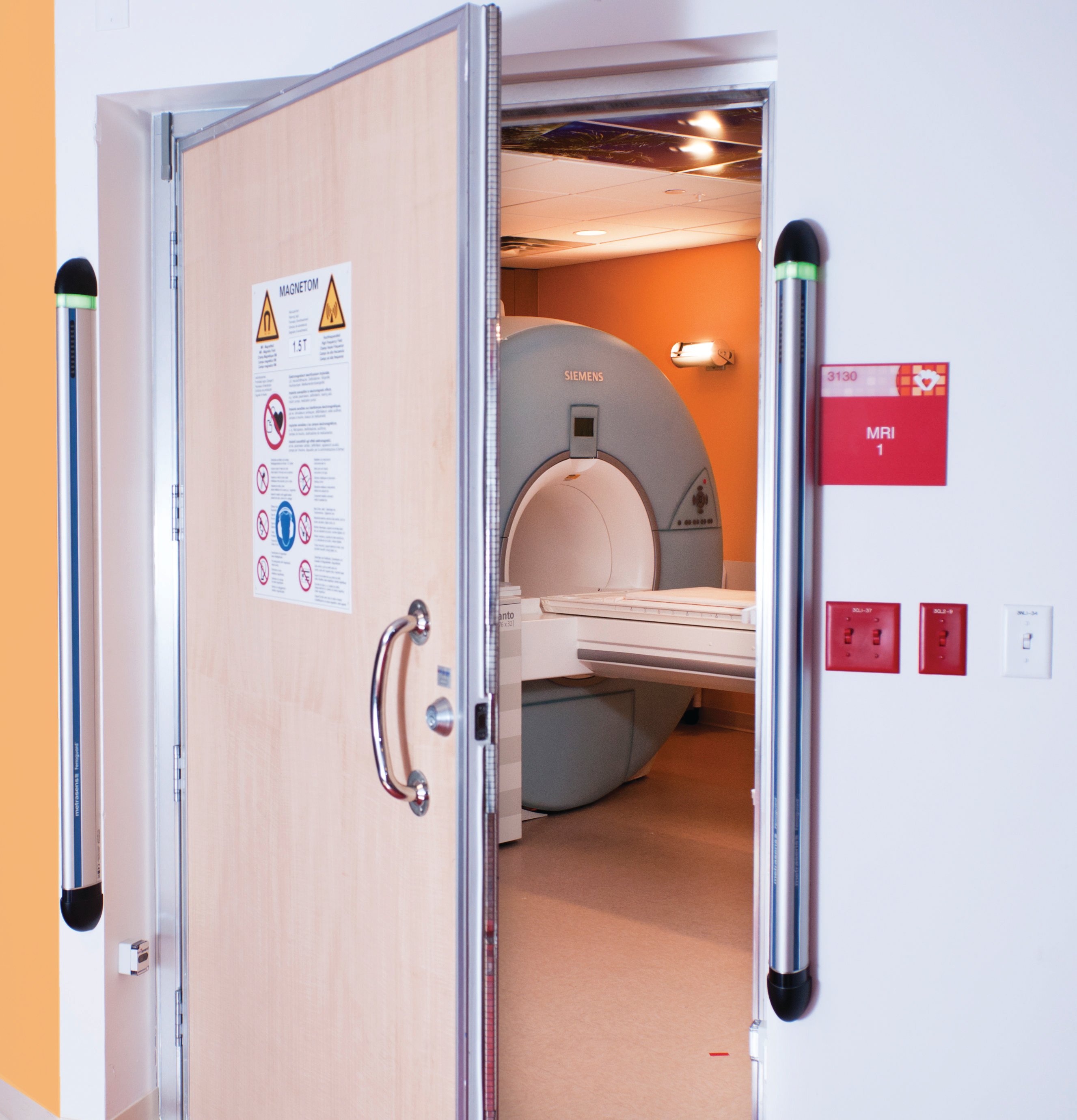 Ensuring that the FMDS for MRI safety is mounted outside Zone IV provides maximum early warning. (Images courtesy of Metrasens)

Nearly every job in the country is subject to certain health and safety regulations. Construction workers must wear hard hats and steel-toed boots on the jobsite. Offices have to display emergency exit signage and mount fire extinguishers. Restaurant employees are required to wash hands often and comply with food safety specifications.

The healthcare industry is no different — in fact, its standards and regulations are stricter than many industries. But gaps within certain regulations and guidelines can have serious implications on employee and patient safety in a hospital or clinic, and one of the areas with gaps is magnetic resonance imaging (MRI) safety guidelines, particularly when it comes to ferrous objects.

When ferrous objects — such as those made with steel, nickel or cobalt — reach the edges of an MRI magnet’s always-on magnetic field, they can be strongly attracted, at high speed, toward the bore of the magnet — a phenomenon known, with no exaggeration, as the projectile effect. While specific standards and guidance now exist to help prevent such incidents, this was not always the case — and even their current existence is not enough.

The Checkered History of MRI Safety

One can understand how black holes in MRI safety exist by comparing magnet safety protections to those of X-ray, nuclear medicine and computed tomography’s (CT) use of ionizing radiation.

Resulting from concern during the Manhattan Project about workers’ exposure to radiation on the job, any technology using ionizing radiation has strict exposure guidelines and specific shielding devices to protect both patients and healthcare providers from acute radiation effects and longer-term genetic damage.

But when MRI arrived on the healthcare scene in the 1980s, it was hailed as “safe,” because it doesn’t use ionizing radiation. Not enough questions were asked to determine how safety procedures should be tweaked to cover this different type of technology, and MRI became a victim of its own marketing message: Because the magnetic imaging technology itself does not risk damaging people the way ionizing radiation does, too few guidelines have been put in place to govern it.

The U.S. Food and Drug Administration (FDA), which provides extensive regulations covering manufacturing and marketing of medical devices and maintains an adverse event reporting database, has no authority over the physical siting and operational aspects of MRI suites. Although individual states rigorously regulate intentional and incidental exposure to ionizing radiation, they generally have no regulations or formal guidance addressing the risks associated with MRI’s high-strength magnetic fields.

It wasn’t until 2001 that the spotlight really shone on magnetic projectile accidents, when a six-year-old boy was killed because a metal oxygen tank found its way into the MRI room. It became magnetized and shot through the air, fatally fracturing the boy’s skull.

Around the same time, according to the New York Times, an article in the American Journal of Roentgenology found five other similar incidents spanning 15 years, mostly involving patients on life support who had been wheeled into an examination room with an oxygen tank nearby.

While the situation has improved, with the American College of Radiology (ACR) issuing in 2002 the first version of what is internationally recognized as the premier best practice guidance document, MRI projectile events have not completely gone away — just this past January in Mumbai, a man died after bringing a steel oxygen tank into an MRI room.

Although the ACR’s guidelines are clear, there is no real enforcement of its recommendations; it is up to the individual healthcare providers and facilities to implement them. It is not done across the board for two reasons: the education gap and the information gap.

The Gaps in Guidance

The information gap exists because, while MRI projectile events certainly happen, they are not terribly common. It may take months or years before even the busiest of imaging centers or hospitals experiences an incident involving a ferrous object turning into a dangerous projectile in an MRI suite. Because they are so infrequent, they are not top of mind for many healthcare professionals.

Additionally, there is a stigma attached to these types of incidents. If one occurs, someone may feel their hospital or facility is an anomaly because they have never heard of it happening at other hospitals they know, and that leads to underreporting and information suppression. This underreporting creates the information gap and perpetuates the stigma, creating a vicious cycle.

The information gap thus spurs the education gap because, without information, people can’t learn from others’ mistakes and prevent an incident occurring in their own facility, so the same errors are made repeatedly. The tragedy in Mumbai in January was an echo of a myriad of similar cases in previous years. The FDA speculates its adverse event reporting database captures just a small percentage of actual incidents, which means many facilities are unaware that these incidents do occur and do not take necessary steps to prevent them.

It is time to close the education and information gaps, and healthcare professionals must understand that a few simple best practices can virtually obliterate the chances of MRI projectile incidents. One of the ACR’s recommendations, a ferromagnetic detection system (FMDS), provides a way to detect ferrous materials before they enter an MRI room, eliminating the potential of human error during manual screening.

When used in a hospital or MRI facility, FMDS can detect objects that the MRI machine will attract well before the objects enter what the ACR has designated Zone IV — the MRI scanner room itself.

When correctly positioned in Zones II and III — the controlled areas between the unregulated Zone I and Zone IV, the magnet room itself — FMDS will provide an alert that allows the MRI technologist to check for hazards and remove the objects before they cross into Zone IV and present a projectile danger.

The beauty of FMDS is in its persistence. These devices do not become bored or disinterested, but consistently screen for potential risks and trigger an alarm whenever they sense a ferromagnetic object. While something large and heavy like an oxygen tank may seem to pose the greatest hazard, even very small objects can do damage — for example, a patient with a ferrous aneurysm clip in his brain would be at risk of injury or death if he had an MRI without noting to a technologist the presence of the clip. Many implants and devices at risk of negative interaction with MRI, such as pacemakers, may also contain ferromagnetic components that FMDS can detect, providing yet another opportunity to catch items that may threaten the safety of the MRI patient.

There is no alternative to FMDS when it comes to MRI suites; in fact, the ACR includes it in its recommendations for MRI safety best practices for this reason. Conventional “airport style” walk-through metal detectors and hand wands are specifically recommended against by the ACR for several reasons, including varied and variable sensitivity settings, and the failure to differentiate between ferromagnetic and non-ferromagnetic metallic objects. Contemporary healthcare design standards often go beyond the ACR recommendation and specifically require FMDS in MRI suites.

The most recent version of the ACR best practices includes using FMDS in conjunction with thorough screening, access control — ensuring non-MRI-suite staff are not able to enter controlled zones — and conspicuous labeling of any hospital- or facility-owned object (gurney, wheelchair, oxygen tank, etc.) that cannot be carried into the controlled zones. When these practices are combined, testing found that 94 percent of all reported projectile accidents could have been prevented.

Healthcare providers have an obligation to their patients to ensure safe conditions across an entire hospital or facility, and that includes safeguarding the MRI suite. No surgeon would enter an operating theater without rigorously scrubbing up and donning booties and bunny suits, and ensuring the MRI suite is clean of ferromagnetic objects should be considered similarly non-negotiable. While MRI technology itself is safe, its usage creates risks due to the sheer power of the magnetic fields employed.

Demonstrating a continued focus on MRI safety, the ACR is expected to release the 2018 version of these best practices with some new and updated guidance on topics such as the approval of stronger magnets in MRI machines and MRI use in interventional and interoperative settings. What won’t change is the ACR’s strong recommendation for the implementation of FMDS technology as the gatekeeper of every single MRI suite across the globe to help prevent projectile incidents.

FMDS is a key best practice in safeguarding MRI suites against serious accidents. To close the loophole in MRI safety that continues to allow projectile accidents to occur, the industry must understand that screening, labeling objects and access control alone will not prevent the projectile phenomenon. Only by rigorously employing all of these practices, with FDMS as the final detection system, will MRI staff be able to keep the MRI suite clean, and patients and employees safe.

Tobias Gilk is MR safety certified MRSO and MRSE, an MRI expert consultant for Metrasens, and the current chairman of the American Board of Magnetic Resonance Safety (ABMRS). He has over 20 years of experience as a practicing architect developing a particular expertise in MRI equipment siting, and is highly involved in professional and regulatory aspects of safety and design for radiology/MRI. He is also pursuing his Ph.D.