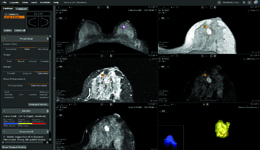 Cancer mortality rates have decreased as new technologies have been introduced into the field of healthcare, but these new technologies can sometimes present new challenges. There is no better example than in the fight against breast cancer.

In the past decade, MRI has joined mammography and ultrasound as one of the leading tools to detect breast cancer at its earliest stages, when it is most successfully treated. Used together, these modalities offered tremendous hope to women who either have breast cancer or who are afraid they might develop it.

But the addition of breast MRI has not been without difficulties. Whereas a typical mammogram might consist of six images and a standard breast ultrasound study might have two dozen images, breast MRI frequently generates more than 2,000 images for the radiologist to review. In addition, there is a demographic shift in which a greater proportion of the population is entering their high-risk years for breast cancer. Making matters worse, breast imaging is consistently rated by radiologists as their most difficult work, and it has a reputation for being the most litigious. Young radiologists are reluctant to enter into the field, and the number of radiologists interpreting breast images remains static. The result is a dramatically increased workload for each radiologist.

One of the most important tools for assisting radiologists with large-volume workloads is computer-aided detection (CAD) software. However, CAD differs in purpose and function for each technology to which it is applied. With mammography, the purpose of CAD is to highlight areas that might be abnormal. By doing so, it is designed to improve on the moderate sensitivity of mammography.

In the case of breast MRI, CAD software is very different from CAD used in other areas of medical imaging. Breast MRI is an extremely sensitive tool, therefore, CAD software is not needed to improve its sensitivity. Breast MRI CAD is primarily a workflow tool, designed to help the radiologist manage the large data files, describe any abnormalities on the images, and convey that information to the referring physicians and patients. At the same time, it can correct artifacts associated with motion. That is why many physicians refer to breast MRI CAD as “computer-aided description.”

Radiologists using breast MRI CAD say that they can report cases much faster and with greater confidence. Whereas a typical case might take 45 minutes to report without CAD, the same case can be finished within 10 minutes with the aid of CAD software. These time savings are possible because the CAD software is able to automate many of the routine measurements the radiologist must make.

It is not sufficient for the radiologist simply to identify an abnormality. The lesion must be measured in three dimensions. First, where is it located. Second, how far is it from the skin, chest wall and nipple. Third, where is it in relation to other lesions. The radiologist could answer many of these questions by clicking and dragging, but it is far easier to automatically identify the region of interest in the computer generated data.

This is a tedious process when done by hand, but is relatively straightforward once the computer has generated an “angiogenesis map.” The map is a color representation of the kind of blood flow in a given tissue, and is superimposed on the anatomical images. Much like a weather map is used to indicate regions with particular temperatures or heavy precipitation, so too can an angiogenesis map identify tissue associated with malignant-type blood flow. The angiogenesis map is an intuitive tool that allows the radiologist to quickly identify the tissue that is most suspicious for a malignancy.

One drawback to the very high-resolution MR images is that they are highly susceptible to any movement by the patient while pictures are being acquired. The patient must lie still for up to 45 minutes. This can be very challenging, and even the most cooperative patient has difficulty remaining motionless for that length of time.

Furthermore, as the MR technology has improved and the resolution becomes better, motion artifact is now more likely to degrade the images. Motion is one of the most common artifacts seen on breast MR images. Again, CAD software can help with this problem.

Once the images have been interpreted, it is necessary for the radiologist to generate a report. Traditionally, radiologists have dictated into a tape or digital file that is later transcribed. The hard copy report is then returned to the radiologist for proofreading before being issued to the referring physician.

Breast MRI CAD software takes this a step further. Rather than dictate a report, the radiologist has the option to describe each lesion by selecting descriptors and adjectives from a drop down menu. This information, along with the various measurements and selected pictures, automatically populates a report, which is issued immediately to the referring physician with no input from a transcriptionist. The distribution is done electronically, and copies are automatically stored in the electronic medical record. This dramatically decreases the time from image interpretation to report distribution.

Another key advantage is that reports generated with the help of CAD software conform to the American College of Radiology BI-RADS lexicon. This lexicon is the profession’s preferred terminology for breast imaging reports.

There is one other advantage to breast MRI CAD software that should not be overlooked, and that is its role in communication and teaching. A picture is worth a thousand words, and this is never more true than when a surgeon is planning treatment. Even if the radiologist has scrupulously used the BI-RADS lexicon, most people find it easier to see where the lesion is located using the three-dimensional images reconstructed by the CAD software.

Similarly, many newly diagnosed patients believe that their entire breast is contaminated by disease. They are frequently and pleasantly surprised to see the three-dimensional images and discover that their cancer is much smaller than they had imagined.

Ian Gardiner, M.D., is breast imaging director of Canada Diagnostic Centres in Vancouver, British Columbia, Canada, as well as a clinical assistant professor at the UBC department of radiology, and a breast-imaging consultant at the Specialist Referral Clinic. He sits on the Board of the Canadian Breast Cancer Foundation (British Columbia and Yukon Chapter). Dr. Gardiner’s area of expertise is medical breast imaging, including mammography, ultrasound and MRI. He is responsible for the development of professional standards and certification for breast ultrasound technologists.