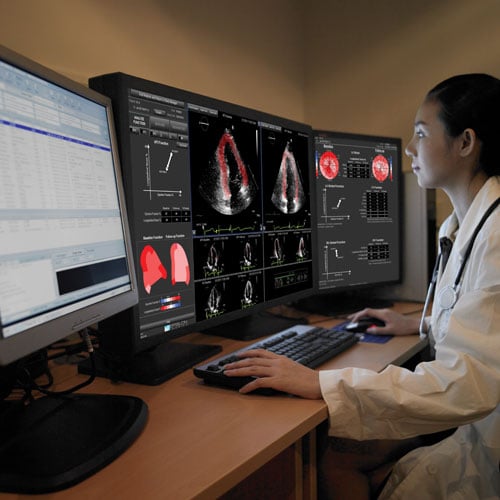 Epsilon’s EchoInsight software is used to help evaluate cardiotoxcity due to chemotherapy or radiation therapy. 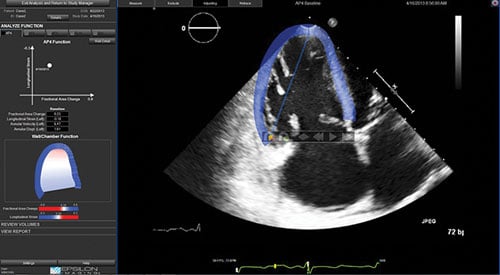 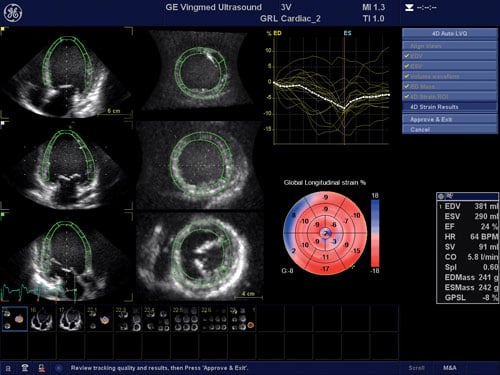 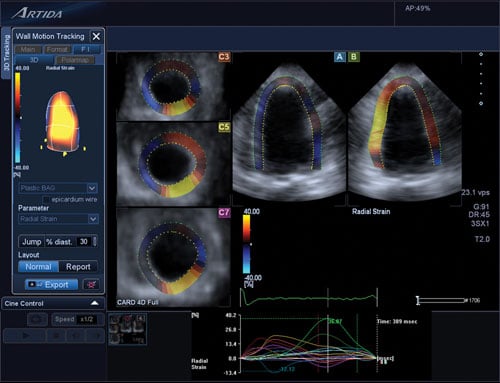 Cardio-oncology is an emerging field that combines the expertise of both cardiology and oncology to assess and treat cancer patients for the second leading cause of death among cancer survivors — cardiovascular disease brought on by their treatments. Specific types of chemotherapy and chest directed radiation therapy are known to cause cardiac dysfunction, mainly due to cardiotoxicity — the symptoms of which may not present until months or even years after cancer treatment.

Cancer treatments can lead to cardiovascular health problems, including increased risk of cardiac dysfunction, heart failure, arrhythmias, valvular heart disease, accelerated atherosclerosis and pericardial disease. Cardio-oncology as a field includes both cardiology and oncology specialists working together across all aspects of cardiovascular risk determination, prevention and treatment, starting at cancer diagnosis and continuing throughout survivorship. The cardiac assessment of these patients centers on ultrasound to monitor myocardial or structural damage caused by cancer therapy. This new specialty area was the focus of several presentations at the American College of Cardiology (ACC) 2016 annual meeting.

There are 14.5 million cancer survivors in the United States today, said Anecita Fadol, Ph.D., RN, FNP, FAANP, assistant professor, Department of Nursing, The University of Texas, MD Anderson Cancer Center, Houston, Texas, speaking at ACC.16. She explained the leading cause of death among these survivors is 51 percent mortality due to the cancer itself, but another 33 percent die due to cardiovascular disease that is often caused or exacerbated by the cancer treatment.

Both chemotherapy and radiation therapy are largely based on the concept of slowly killing cancer cells through several treatment sessions. These are spaced out to allow healthy, normal cells in the body time to repair and recover before the next treatment. Cancer cells cannot recover or repair DNA damage as quickly, or as well, as normal cells. This leads to cancer cell death or leaves these cells too badly damaged to replicate.

Fadol said numerous clinical studies have confirmed anthracycline chemotherapy agents (including doxorubicin, epirubicin, idarubicin and mitoxantrone) are the primary cause of cardiovascular toxicity. Doxorubicin has the most studies, so there is a large amount of data showing its clear impact on the myocardium.

Fadol said the onset of anthracycline-induced cardiotoxicity is usually seen several months after treatments begin, but there can be late onset up to a year or more after treatments ended. The injury includes permanent cell damage that can progress to uncompensated heart failure. However, she explained heart failure is not a death sentence for cancer patients, because today the condition can be managed with medication and implantable cardioverter defibrillators (ICDs). This is an area where collaboration with cardiology is important, she stressed.

Fadol said the biggest impact of cancer treatment cardiotoxicity is seen in children. “All survivors of childhood cancer are at increased risk of cardiotoxicity regardless of the therapy used,” she said.

Other types of chemo agents can also impact the heart, said Eugene Storozynsky, M.D., Ph.D., University of Rochester Medical Center, Rochester, N.Y. An example of this is the monoclonal antibody agent trastuzumab, which interferes with the HER2/neu receptor in breast cancer. He explained the agent inhibits the neuregulin-1 (NRG-1) pathways, which are essential for the activation of cardiomyocytes and the maintenance of cardiac function. The result is a reduction in contractile force that results in reduced ejection fractions.

Risk factors involved in assessing patients include cumulative dose of chemo, age of patient at exposure, concomitant administration of other cardiotoxic drugs, and concurrent or prior radiation therapy, Fadol said.

Cardiac imaging surveillance of cancer patients can be done using echocardiography, nuclear imaging or magnetic resonance imaging (MRI), said Storozynsky. However, echo is the easiest modality for most patients and centers to access, and is less expensive than nuclear or MRI. He said 3-D echo allows the calculation of very accurate ejection fractions. Live tissue Doppler allows imaging of cardiac function by assessing wall motion, and this can be enhanced using echo contrast.

One cardiac ultrasound innovation that is widely used to assess cancer patients’ hearts is echo strain imaging. This advanced visualization software allows simultaneous assessment of three different views of the myocardium. The software allows quantification of the amount of left ventricular (LV) systolic function muscle strain in each view. Storozynsky said strain imaging can show microscopic changes in movement of the myocardium prior to the presentation of symptoms.

The ongoing Strain surveillance during Chemotherapy for improving Cardiovascular Outcomes (SUCCOUR) Trial is the first large-scale, international randomized study of chemotherapy patients at risk of cardiotoxicity. The study includes 12 countries, including U.S. centers. Patients will undergo cardioprotection guided by measurement of LV strain, compared with cardioprotection guided by measurement of LV ejection fraction, for avoidance of cardiotoxicity. The trial began enrolling patients in 2014 and will follow them out to three years. Storozynsky said the results of that trial will definitively show whether strain is a better marker than ejection fraction for earlier detection of cardiotoxicity.

He said another approach is to use multimodality imaging (echo and nuclear) starting at the onset of administration of chemotherapy. Follow-up exams are then done after half of the cumulative dose has been administered and before every subsequent dose thereafter. After treatment is completed, follow-up imaging should take place at three, six and 12 months to assess ejection fraction.

National Comprehensive Cancer Network (NCCN) guidelines for patients who receive anthracycline treatments call for screening for heart failure within one year of treatment. At MD Anderson, Fadol said patients usually get a baseline echo exam prior to treatments and are followed up with an echo after treatment is completed.

Most cancer patients who undergo chemotherapy get cardiomyopathy with some loss of LV function, said Joseph R. Carver, M.D., chief of staff and professor of medicine, Abramson Cancer Center of the University of Pennsylvania. He said heart failure is seen in between 1-5 percent of these patients.

Radiation therapy further extends risk to all cardiac structures, not just the myocardium. Carver said this includes the conduction system, valves, endocardium and the myocardium. He said risk factors include radiation doses above 30 Gy per day, higher dose/fractions of 2 Gy per day and the field volume being treated.

Those patients who do develop heart failure are usually in American College of Cardiology (ACC)/American Heart Association (AHA) Stage B, for which Carver said there are guidelines to assess and treat them.

“Cardio-oncologists can help oncologists make decisions about care and treatment,” Carver explained. He said primary prevention of cardiotoxicity can be accomplished via risk factor modifications. These include use of a non-anthracycline regimen, lower dosing, decreasing peak plasma concentration or use of “targeted” doxorubicin. Protective pharmacology might also be implemented, including use of dexrazoxane, which protects the heart against the cardiotoxic side effects of chemotherapeutic drugs, including anthracyclines. ACE/ARB beta-blockers, statins and ACE inhibitors may also offer options to help protect the heart, Carver said.

Another cardioprotective treatment option is the use of liposomal doxorubicin, which Carver said uses a lipid encapsulation of the chemo drug. This increases the size of the drug molecule, which prevents it from entering the heart, but it can still infiltrate tumors.

An investigational chemo agent now in trials that may offer additional cardioprotection is zoptarelin doxorubicin, a so-called Trojan horse agent. It consists of doxorubicin linked to a small peptide agonist to the luteinizing hormone-releasing hormone (LHRH) receptor.  These receptors are present in large numbers in endometrial, ovarian, prostate and breast cancers. Carver said the receptors allow targeted release of the doxorubicin mainly in cancer cells, instead of systemic use of the agent where it causes collateral damage to the heart.

A nationwide study conducted by the ACC and published in 2015 identified current frequent barriers to cardio-oncology services in the United States. According to the study, many hospital training programs have no formal training or services in cardio-oncology, and a lack of national guidelines and funding also creates barriers.5 Of the 106 respondents, more than 70 percent felt the cardiovascular implications of cancer treatments were a very important consideration in the cancer patient treatment continuum. Sixty-five percent thought access to consultants with specialized training would provide an advantage in caring for cancer patients suffering cardiovascular complications.

Almost half of respondents said their programs offered no formal training in cardio-oncology, with a majority of the other half offering exposure during regular rotations. For 44 percent of programs surveyed, the reason for no or limited training was both a lack of national guidelines in cardio-oncology and a lack of funding.

But the need is there. A significant number of those surveyed reported they did not feel confident in dealing with cardiovascular care specific to cancer patients, and gave themselves only an average rating when asked about their level of understanding of the impact of holding or stopping cancer treatments on cancer outcomes.

“Despite the common belief that cancer patients with treatment-related cardiovascular issues would greatly benefit from a specialized team devoted to the cardio-oncology field and a significant number of cancer patients experiencing treatment-related cardiovascular issues, we are lacking the proper resources to care for these patients,” said Ana Barac, M.D., Ph.D., lead author of the study and director of the cardio-oncology program at MedStar Heart and Vascular Institute in Washington, D.C. “A newly formed American College of Cardiology section dedicated to filling this gap will give physicians in the field a forum to discuss best practices and work together to develop methods for training more physicians in providing the best possible care for these unique patients.” 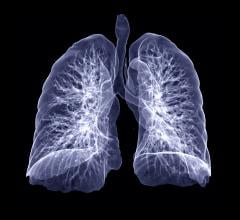