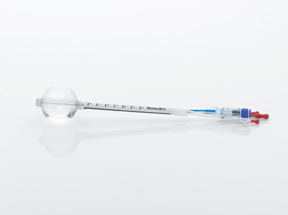 The MammoSite ML 1 from Hologic is one of the devices used for accelerated partial breast irradiation (APBI).

May 14, 2012 — Using a concentrated, highly targeted dose of radiation to the breast has equally as good results as irradiating the whole area, with no adverse effects on survival and a much better cosmetic outcome, Hungarian researchers have found.

Reporting the 10-year results of a randomised trial, Professor Csaba Polgár, M.D., director of the Centre for Radiotherapy, National Institute of Oncology, Budapest, told the World Congress of Brachytherapy (WCB) that he believes accelerated partial breast irradiation (APBI) could be offered to many more breast cancer patients, resulting in fewer side effects and major cost savings to healthcare systems. The WCB was held in parallel with the 31st conference of the European Society for Radiotherapy and Oncology (ESTRO 31), both taking place in Barcelona between May 9-13.

The Budapest trial was the first randomised study to compare the efficacy and side effects of conventional whole breast irradiation (WBI) with APBI using multicatheter brachytherapy. This technique consists of inserting multiple plastic catheters into the tumor bed after breast conserving surgery. The catheters are inserted under local or general anaesthesia, according to the wishes of the patient. The radiation source is then loaded into them to deliver a highly concentrated dose to the precise region of the excised tumour – the region most likely to develop a local recurrence of the cancer. Using APBI means that the major part of the healthy breast tissue does not receive radiation.

“In a group of 258 women who had had breast-conserving surgery, we found that, at a median follow-up time of just over 10 years, the rate of local recurrence – the cancer coming back in the same place – was 5.9 percent in the APBI group and 5.1 percent in the group who received whole breast irradiation,” says Polgár. “There was no significant difference in overall survival, cancer-specific survival and disease-free survival between the two groups. However, the differences in cosmetic outcome were striking – 81 percent in the APBI group had good-to-excellent results as opposed to 63 percent of those who received whole breast irradiation.”

A further advantage of APBI is that treatment time can be shortened. As opposed to whole breast irradiation, where a course of treatment typically takes five weeks (five treatments per week), APBI can be carried out in four to five days. “We believe that the results of our trial will encourage more patients to choose APBI, particularly those who may now be inclined to refuse radiotherapy because of the logistical difficulties involved – having to travel long distances over a period of six weeks can be a major problem for some patients,” Polgár said.

Fewer than 10 percent of early stage breast cancer patients currently receive APBI in Europe, and in some countries it is still considered an investigational treatment. In other parts of the world, including the United States, it has been accepted into general practice for the treatment of selected low-risk patients.

“Our trial has shown that it is possible to use a faster and more focused treatment without compromising survival. It is a little like comparing a total mastectomy with a lumpectomy – we have found that we can improve cosmetic outcomes, lessen side effects and achieve greater patient satisfaction with a less invasive and more cost-effective technique. Other multi-center trials of APBI are currently underway, and we believe that these are likely to give further support to our findings,” Polgár concluded.