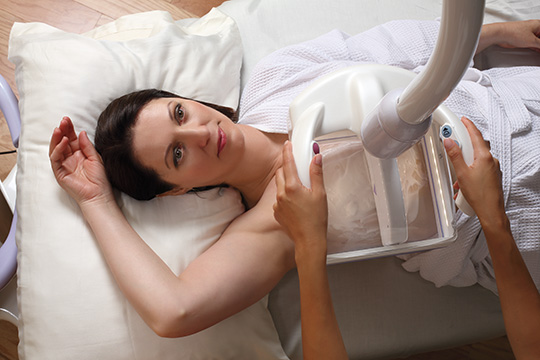 Over the last decade, the impact of dense fibroglandular breast tissue on breast cancer screening has become a prominent topic of national conversation among those fighting the disease. Screening is the first line of defense for patients, and the realization that their mammography results may not be accurate has caused concern. While mammography remains the gold standard for breast cancer detection and diagnosis, the “one-size-fits-all” approach of years past has evolved as patients and providers drive toward more personalized screening programs. While several technologies and other new developments have propelled this idea forward, automated breast ultrasound (ABUS) has gone a long way toward cementing the idea of patient-specific breast cancer screening protocols and programs.

While the radiological consequences of dense breast tissue have only become public knowledge in the last decade or so, healthcare providers have been long aware of the complications. They were not required to share that information with patients, however, so most did not. The status quo changed in 2009 when Connecticut became the first state to pass a breast density inform law mandating inclusion of density information in the mammography reports of patients found to have heterogeneously or extremely dense breasts (according to the American College of Radiology Breast Imaging-Reporting and Data System [BI-RADS]). As of press time, 31 states have enacted some version of density inform legislation.

“The big push is to personalize breast care,” said Monica Saini, M.D., medical director for ultrasound at GE Healthcare. “We also need to address the individual differences between women — and the most common difference is breast density.”

This change in understanding has lead to further research into other modalities to supplement mammography for women with dense breast tissue (BI-RADS categories 3 and 4). The first paper considering ultrasound as a breast screening modality was published in 1995, demonstrating its ability to detect mammographically occult cancers. Numerous follow-up studies have confirmed this capability, though overall detection rates remain comparable between the two modalities.

Early investigations of ultrasound for breast screening employed handheld ultrasound units. While mostly effective, these offered two significant disadvantages — exams could take up to 30 minutes and the results could be significantly impacted by the skill (or lack thereof) of the operator.

Automated breast ultrasound resolves both of these issues, conducting a full-breast sweep in significantly less time to produce a 3-D volumetric image. The three-dimensional views — which now include the coronal view, previously unused for breast imaging — allow radiologists to observe breast tissue from different angles that may reveal tumors previously unseen in a flat, 2-D view.

While the impact of fibroglandular breast density and the ability of automated breast ultrasound to counter it are now well-established, the technology has yet to see widespread adoption. As with any new technology, there is a learning curve, a challenge numerous radiologists have acknowledged for ABUS.

Perhaps most importantly, the three-dimensional views provided by ABUS are forcing radiologists to approach reading time from a whole different viewpoint. “That’s been the biggest change in mindset,” Saini admitted, “but it was also what sold me on ABUS.”

“It’s a new experience for the sonographer, especially in regards to positioning,” Matthew Ernst, ultrasound marketing manager for Hitachi Aloka, said of the experience. He said Hitachi tells users to look for landmarks during the radial scan, and Hitachi’s Sofia system provides images in the radial view by default (though the coronal view is available).

These adjustments can initially lead to increased recall rates and reading times as users adapt to the new technology. Saini estimated that her recall rates were cut in half after reading about 150 cases, and her reading times went from 5-10 minutes down to 3 minutes or less in that span.

As the technology continues to mature, users are having an easier time incorporating ABUS into the daily clinical workflow.

Marc Roy, M.D., director of breast imaging at Northwest Community Hospital, Arlington Heights, Ill., has been using ABUS for a few years, offering the service Monday-Friday and most Saturdays on two dedicated machines. “We recommend it to anyone who has dense breast tissue and had a normal screening mammogram,” said Roy, estimating the hospital conducts 15-20 exams per day.

All users took an eight-hour training course on the ABUS systems, and all cases were double-read early on. Roy said the technologists shared more cases in the early going, and that they also took more views than needed to become accustomed to the new mindset.

El Camino Hospital Breast Health Center was one of the first breast centers in California to adopt ABUS technology, according to Silaja Yitta, M.D., director of breast imaging and intervention. The center offers ultrasound screening daily to every woman found to have dense breast tissue (though a doctor’s order is required for the examination), with an average volume of 4-10 patients per day, with patients in and out in 30 minutes.

“It gives women a peace of mind that they’re doing something additional for themselves if they have dense breast tissue,” Yitta said, adding that El Camino has patients who come from other facilities specifically for breast ultrasound screening because it is not offered where they had their mammogram. California does have a breast density inform law, and Yitta explained that as a result her patient demographic tends to be fairly educated and have spoken with their primary care doctor about breast density and supplemental screening.

The number of vendors in the ABUS market has grown slowly, with Siemens, U-Systems Inc. (acquired by GE Healthcare in 2012) and SonoCine among the first to launch systems.

GE Healthcare introduced its latest-generation ABUS system, dubbed Invenia, at the 2013 Radiological Society of North America (RSNA) annual meeting in Chicago. The system can conduct a whole-breast 3-D examination in 15 minutes, capturing thousands of images to provide a comprehensive view of the breast. Images are presented in the coronal view by default, but the more traditional views can be accessed with a single click.

The company released a software update in March designed to improve image quality by enhancing tissue penetration, which reduces shadowing on the image; Saini said this also makes it easier to distinguish cysts from masses in the breast. The new software now allows evaluation behind the nipple, an area Saini said is traditionally difficult to penetrate.

Hitachi Aloka joined the market through a different path in 2014 when it became the exclusive distributor of iVu Imaging’s Sofia automated whole breast ultrasound scanner. The system can perform a whole-breast scan in just 30 seconds, acquiring 900 images in a single sweep thanks to radial scan capabilities and an extra-long linear probe. Unlike other breast ultrasound systems, Sofia performs exams in the prone position, “so the patient’s own body weight will essentially perform their own compression,” said Ernst.

In September 2016, Hitachi announced that the Sofia whole-breast imaging technology would be integrated with its own Arietta 60 and 70 ultrasound systems. The Arietta platform and its long linear transducer enable the system to automate the 3-D radial acquisition of an entire breast in nearly half the time of previous-generation ultrasound systems.