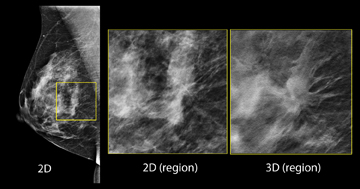 Imaging comparison between 2-D and 3-D. Tomosynthesis allows radiologists to view slices of the breast. 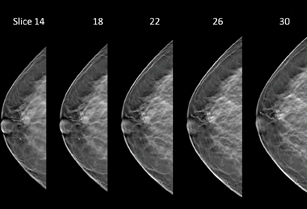 An illustration of how slices of breast tissue can be viewed to avoid tissue overlap.

Data from a new study of more than 170,000 examinations using 3-D mammography (breast tomosynthesis) screening technology finds significantly more invasive cancers than a traditional 2-D mammogram. The researchers also found that 3-D mammography reduces the number of women called back for unnecessary testing due to false alarms. The study was published in the June 25, 2014, issue of the Journal of the American Medical Association (JAMA).

Traditional 2-D screening mammography has played a key role in reducing breast cancer mortality, although it has drawn criticism for excessive false-positive results, limited sensitivity and the potential of over-diagnosis of clinically insignificant lesions. Tomosynthesis, however, allows for 3-D reconstruction of the breast tissue, giving radiologists a clearer view of the overlapping slices of breast tissue. And though a relatively new technology, it has shown promise at reducing recall rates in all groups of patients, including younger women and those with dense breast tissue, and better detection rates in smaller studies. Single-institution studies have shown that adding tomosynthesis to mammography increases cancer detection and reduces false-positive results, but this is one of the first large-scale multi-center studies showing the benefit of tomosynthesis.

“We believe this study is groundbreaking because of the sheer number of mammograms we reviewed,“ said lead author Sarah Friedewald, M.D., co-medical director of the Caldwell Breast Center at Advocate Lutheran General Hospital, Park Ridge, Ill. “Because it is 10 times larger than other studies to date, and because the data came from both academic and community healthcare settings, we think it tells a compelling story about the effectiveness of 3-D mammography.”

Women will see little difference in the 3-D mammography exam, which takes just a few seconds longer than traditional 2-D mammography. But, what radiologists reading the exams see is different. Like the pages of a book, it allows the physicians to see through the layers of the breast and diagnose potential problems more quickly.

“The Caldwell Breast Center at Lutheran General Hospital was the first in the Midwest to purchase 3-D mammography,” Friedewald said. “All of our patients have the opportunity to receive 3-D exams because we believe the technology is saving lives.”

Adding tomosynthesis increased the positive predictive value for recall from 4.3 to 6.4 percent and for biopsy from 24.2 to 29.2 percent.

“It’s the most exciting improvement to mammography that I have seen in my career, even more important for women than the conversion from film-screen mammography to digital mammography,” said senior author Emily F. Conant, M.D., chief of breast imaging at the department of radiology at the Perelman School of Medicine, University of Pennsylvania. “3-D mammography finds more clinically significant breast cancers earlier, which is the key so that women have more treatment options and ultimately better health outcomes.”

The authors wrote that the success of mammography screening in reducing mortality is predicated on the principle of detecting and treating small, asymptomatic cancers before they have metastasized. Accordingly, the preferential increase in invasive cancer detection with addition of tomosynthesis may be of particular value in optimizing patient outcomes from mammography screening. They said the association with fewer unnecessary tests and biopsies, with a simultaneous increase in cancer detection rates, would support the potential benefits of tomosynthesis as a tool for screening. However, assessment for a benefit in clinical outcomes is needed.

•A 41 percent increase in the detection of invasive breast cancers (p<.001).

•A 15 percent decrease in women recalled for additional imaging (p<.001).

•A 49 percent increase in positive predictive value (PPV) for a recall (p<.001). PPV for recall is a widely used measure of the proportion of women recalled from screening that are found to have breast cancer. The PPV for a recall increased from 4.3 to 6.4 percent.

•No significant change in the detection of ductal carcinoma in situ (DCIS). DCIS is a non-invasive cancer. It has not spread beyond the milk duct into any normal surrounding breast tissue.

Currently the only U.S. Food and Drug Administration (FDA)-cleared tomosynthesis system is the Selenia Dimensions from Hologic, which was launched in the U.S. market in February 2011. “The JAMA 3-D study validates the findings of previously published studies but on a much larger scale,” said Peter J. Valenti III, Hologic division president, breast health. “The study addresses the two most frequently cited concerns with breast cancer screening — that we are finding too many cancers that don’t need to be treated and that too many women are being called back for unnecessary additional testing. Each of the outcomes measured was statistically significant and reinforced the benefits of Hologic 3-D mammography in addressing these challenges.”