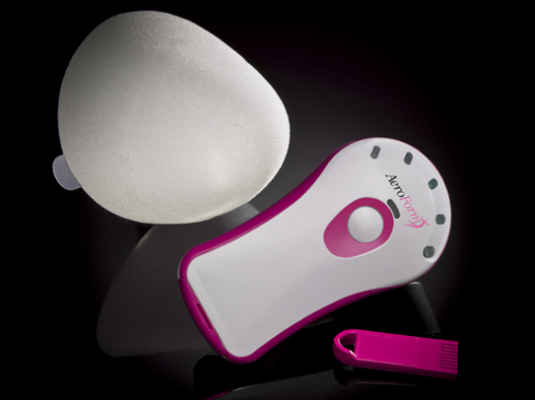 January 13, 2014 — AirXpanders Inc., a developer of technology for women who require tissue expansion for breast reconstruction following a mastectomy, announced new data published in The Journal of Radiation Oncology that demonstrates the AeroForm Tissue Expander can withstand radiation levels well above the maximum dose level typically used in post-mastectomy radiation therapy.
"Once a woman undergoes a mastectomy, she may still have to undergo radiation therapy. AeroForm offers women a more gradual, patient-controlled option for expansion, and I'm pleased to see that the device is unaffected even by extremely high levels of radiation," said James Rembert, M.D., radiation oncologist. Alta Bates Summit Comprehensive Cancer Center, Berkeley, Calif. "It is further proof that women who require additional radiation can feel confident that the AeroForm will not be impacted, so that they can continue to make progress towards regaining their shape even while continuing to receive treatment."
The study determined that the electronics inside the AeroForm expander continued to function properly after exposure to radiation levels up to 75 Gy — well above the maximum dose level (50-60 Gy). Following radiation exposure, 32 tissue expanders were functionally tested, and each successfully established communication with the dosage controller and deliver three CO2 doses according to product specifications.
A second, separate poster presented at the American Society for Radiation Oncology (ASTRO) Annual Meeting by Jeffrey Kuo, M.D., University of California, Irvine. He demonstrated that the AeroForm expander did not significantly impede the delivery of radiation doses compared to dosing in breast cancer patients who have intact breasts. Results showed that measured skin doses varied only from -12 to +12 percent and suggested that computed tomography (CT) scans can help optimize dose variation.
"This data confirms that AeroForm is not adversely affected by radiation therapy, and there is minimal interference in the delivery of radiotherapy with an AeroForm implant in place," said Scott Dodson, president and CEO, AirXpanders. "As with all tissue expanders, the decision to use radiotherapy in conjunction with a tissue expander is at the discretion of the radiation oncologist and plastic surgeon. We are diligently working towards regulatory approval in Australia and expect to complete U.S. trial enrollment by the end of the year."
For more information: www.airxpanders.com, www.ro-journal.org