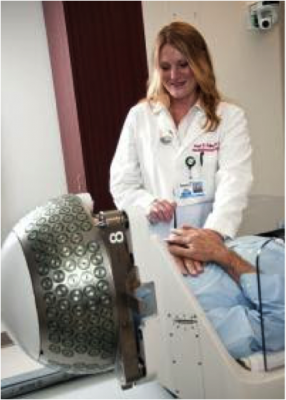 March 5, 2014 — Research by Beaumont Health System radiation oncologists and neurosurgeons found that symptoms of trigeminal neuralgia (TN) were reduced in those treated with Gamma Knife stereotactic radiosurgery. The results were published in the February issue of the journal Clinical Neurology and Neurosurgery.

"The Gamma Knife is not actually a knife," says Inga Grills, M.D., radiation oncologist, Beaumont Hospital, Royal Oak and associate professor, Oakland University William Beaumont School of Medicine. "Gamma Knife stereotactic radiosurgery is a nonsurgical technique that precisely delivers a high dose of radiation to a targeted area. It sends more than 200 beams of gamma radiation, while the low intensity of the individual beams avoids causing damage to the surrounding tissues."

Principal investigator Grills and a team of Beaumont researchers analyzed data of 149 patients who were treated with Gamma Knife Stereotactic Radiosurgery (GK SRS). Following the treatment, patients were evaluated at about two weeks, then every three to six months. Patients reported if they experienced normal, decreased or no facial pain. Researchers concluded GK SRS provides acceptable relief for those with TN, especially those who are not suitable or have failed medical or surgical treatments.

"This study demonstrates patients with severe facial pain caused by trigeminal neuralgia will experience less discomfort after Gamma Knife Stereotactic Radiosurgery,” Grills said. “They can resume daily activities such as brushing their teeth, washing their face and even smiling, without the unbearable sensation that is often caused by this condition.”

Approximately 150,000 people are diagnosed with TN every year, according to the American Association of Neurological Surgeons. Women over the age of 50 are among those who are most commonly diagnosed. Those at risk are people with high-blood pressure or with multiple sclerosis.