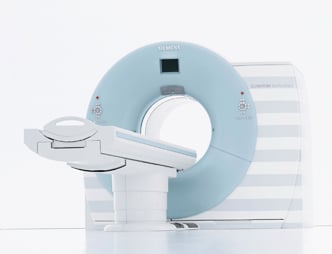 The Customer
Advanced Imaging Specialists (AIS) is a partnership between Mercy Health Partners and leading radiologists in the Scranton, Penn. area. AIS is widely recognized as providing the highest quality outpatient diagnostic imaging services to patients in four convenient locations.
AIS has long shown a commitment to providing the most advanced technologies available and to apply these technologies to help referring physicians accurately diagnose their patients. AIS’ operating philosophy has been to use the latest and most advanced technologies to effectively and efficiently care for patients. AIS offers the same level of professional service at all four locations to ensure physician and patient satisfaction. The four state-of-the-art imaging centers use the very latest Siemens medical equipment, a world leader in diagnostic imaging performance.
CT studies are performed using one of the world’s most advanced 64-slice CT scanners, the Siemens SOMATOM Sensation. AIS also utilizes the Siemens Magnetom Symphony (Maestro Class) MRI, which provides exceptional imaging capabilities along.
In addition, state-of-the-art Siemens equipment is being used in digital mammography, radiology fluoroscopy, computed radiology and ultrasound & 4D ultrasound applications.
“We were able to replace our 4-year old PACS with the ImageGrid PACS for what we had budgeted for two mammography-only workstations”

The Challenge
In 2008, AIS decided to transition from analog mammography to digital mammography. As part of this change, AIS radiologists felt strongly that the digital mammography workflow should be consistent with the workflow that they had implemented for other modalities. AIS had implemented a PACS system a number of years ago and unfortunately, adding mammography diagnostic viewing capability to that PACS was not possible. During the course of discussions and product demonstrations, the radiologists expressed a desire to have a unified Radiology and mammography reading solution.
At the time, AIS had two sites, with plans for significant growth through the opening of new sites and acquisition of existing imaging practices. In order for AIS radiologists to be able to provide the same high level of services and response time, it was critical to have a web-enabled state-of-the-art solution so that they could devote more of their time to diagnostics rather than having to travel from site to site.
In addition, the other critical challenge the radiologists at AIS wanted to be addressed was the ability to read general radiology and digital mammography from a single workstation and from a single worklist.

The Solution As part of the Siemens Novation implementation, the ImageGrid Mammography Viewer was presented as a possible solution. The radiologists were impressed with the features and functionalities of the highly cost-effective thin-client ImageGrid Mammography Viewer. Of particular interest to the radiologists was the highly customizable Mammography Hanging Protocols, which provides each radiologist with the ability to create their own desired workflow parameters and having those settings and preferences saved on the server for easy access from any workstation. In addition, the thin-client aspect of the ImageGrid Mammography Viewer was also attractive in that it allowed radiologists to read studies from anywhere.
AIS was pleasantly surprised that the ImageGrid PACS storage/server system on which the Mammography Viewer would reside, was already able to accommodate multiple modalities and there would no additional fees for connecting other AIS modalities to it. In order to achieve the desired workflow, AIS would just need adequate concurrent user licenses for the ImageGrid Advanced Radiology Viewer, a FDA 510(k) cleared thin-client diagnostic reading application also residing on the ImageGrid storage/server system. It soon became apparent that for the cost of two typical Mammography-only Workstations, AIS would be able to replace their existing 4-year old PACS system with a new state-of-the-art ImageGrid Radiology / Mammography PACS solution.
AIS implemented the ImageGrid PACS Appliance with 9 TB of archiving capacity along with two Radiology / Mammography workstations at each site. The workstation station – dubbed the “5-Headed Workstation” consists of Dual Head 5 MP for digital mammography, Dual Head 2 MP for General Radiology and a fifth monitor for radiologist worklist.

The Results
Today, AIS has successfully transitioned to digital mammography and offers an ACR accredited program which also includes other women’s health services such as ultrasound, breast MRI, dexa scans and thyroid biopsies. The ImageGrid Radiology/Mammography PACS Appliance was installed and AIS radiologists were able to create the desired hanging protocols and workflow parameters. In a short amount of time, ImageGrid Radiology/Mammography PACS has become a core part of AIS’ enterprisewide workflow.
AIS radiologists are able to read all studies from any of their workstations and they can select studies to create their own worklists. They are also able to read studies generated at any of the four centers and provide diagnostic reports in a timely manner.
“We were able to replace our 4-year old PACS with the Candelis solution for what we had budgeted to pay for two Mammography-only workstations” said David Soltis, PACS administrator at AIS. “Candelis has been a pleasure to work with and their commitment to customer satisfaction and the willingness to listen to their customers and implement feedback has meant that AIS has been able to get a full-featured solution at a very reasonable price.”
ImageGrid’s inherent cost advantages mean that AIS will realize a significant return-on-investment (ROI), giving it the ability and the flexibility to devote financial resources to invest in the latest modalities for better patient care as well as
new facilities.
“Candelis has us to grow and better compete with far larger institutions. With our transition to digital imaging completed in a very cost-effective way, we are able to profitably provide timely imaging services to patients and referring physicians,” said Dave Soltis.