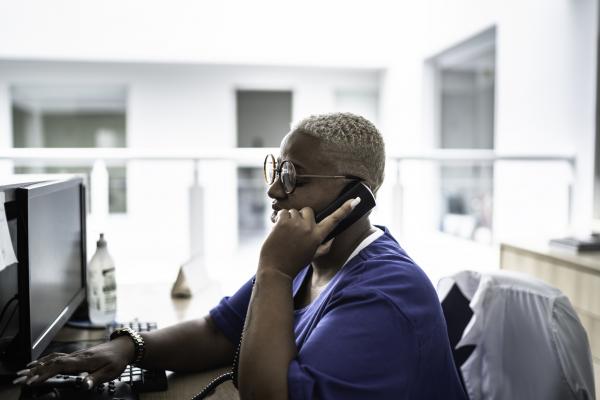 May 22, 2020 — Telephone outreach coupled with scheduling assistance significantly increased screening mammography set-up and follow-through in a population characterized by low rates of screening mammography and high rates of advanced breast cancer at diagnosis. These were the findings of a new study conducted at five primary care urban safety-net hospital (SNH) clinics at University of Missouri, Kansas City, published online in the American Society of Breast Surgeon (ASBrS) 2020 Virtual Scientific Session Official Proceedings and in the Annals of Surgical Oncology.

“Recent controversy about current mammography guidelines designed to combat over-diagnosis and over-treatment may be obscuring the reality within pockets of the most vulnerable patients who are rarely getting screened,” commented primary study author Nasim Ahmadiyeh, M.D., University of Missouri, Kansas City School of Medicine. “These patients are being diagnosed at later stages, and we have ample evidence that the result is more aggressive treatments and worse long-term survival.”

Concerned that its patient population presented with three times as many stage III and IV breast cancers as other Commission on Cancer (COC) hospitals, the Kansas City, MO SNH analyzed the socio-demographic-biologic factors associated with late-stage at diagnosis among these women. Failure to undergo mammographic screening within two years of diagnosis was the most significant factor. In fact, the SNH noted that only 42% of its patients age 50 or older undergo regular biennial screening.

“We wanted to determine whether a two-part intervention as simple as a telephone reminder and offer to schedule the mammogram would boost screening among women who were due for biennial screening mammograms,” she said. The study found that 17% of the women successfully contacted underwent screening within three months from the contact date, compared to 6% in the control group who received the usual care consisting of reminder letters and physician prompting at visits. Significantly, a secondary analysis revealed that the increase in mammography was almost entirely attributable to the women whose exams were scheduled for them. A reminder telephone call alone had no impact on the likelihood of mammogram completion.

The study involved 890 women aged 50 to 65 who were due for a mammogram who were seen at one of the five primary care clinics within three years of the study, but who had not had a mammogram during the prior two years. After randomization into two groups, the intervention group was contacted by telephone up to three times until reached to remind them they were due for a mammogram and to offer assistance in scheduling. The study successfully reached 82.8% of the intervention group. A telephone message counted as a contact. Of those reached, 32.9% set up appointments and 47.1% of scheduled exams were completed.

“We were frankly surprised and extremely encouraged that such a simple intervention requiring minimal resources could boost mammogram rates to such an extent,” commented Ahmadiyeh. “Understanding that the scheduling component drove the success of the intervention is key, because we now can focus our resources most effectively going forward. Phone calls and letters are not enough. Scheduling must be simplified for our already overburdened patients. We hope this finding might be relevant to other safety-net hospitals as well.”

Even with this significant exam uptick, however, the clinics studied still lagged well behind the national average for mammographic exam uptake rate of 73% and goals such as the Healthy People 2020 target of 81%.

“As a next step, we want to engage with our patients so that they can help us boost this rate. It may be tempting to attribute the low screening exam rate to factors such as stress and economics, but we do not want to project our own explanation onto this population. We want to draw on the knowledge, strengths, and capacities of our patients and their communities and truly partner with them in our next phase of research.”

Ahmadiyeh noted that some women across all strata of society fail to undergo regular screening. “In general, early detection remains important in optimizing breast cancer outcomes. No woman should forget this,” she says.