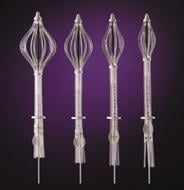 The studies were presented as scientific posters at national medical conferences and were drawn from 12 centers participating in the SAVI Collaborative Research Group. Researchers reached two primary conclusions:

1) SAVI radiation therapy provides for excellent or good cosmetic outcomes in the majority of patients.

2) The device can safely and effectively treat the broadest range of women with accelerated partial breast irradiation (APBI), due to the precision with which the SAVI applicator can deliver the dose.

“These studies point to the fact that by minimizing radiation exposure to normal body structures, the SAVI device makes breast-conservation therapy available to many more women, especially for those with breast cancer close to the skin or chest wall,” said Constantine Mantz, M.D. Mantz, a co-author on both studies, is a radiation oncologist and chief medical officer of 21st Century Oncology, the largest radiation oncology provider in the United States.

The SAVI Collaborative Research Group, from which the data was drawn, was established to study clinical outcomes of APBI treatment with the SAVI device. The data represents the largest subset of patients who have been treated with the SAVI applicator.

SAVI delivers a shortened course of radiation therapy for early-stage breast cancer patients following lumpectomy surgery. It is the only single-entry breast brachytherapy device that allows physicians to sculpt radiation based on patient-specific anatomy, which increases the number of women who can benefit from APBI. Clinical studies show that by providing targeted radiation where it is needed most, SAVI decreases toxicity and lowers the risk of cosmetic side effects.

In a scientific poster presented at the annual meeting of the National Interdisciplinary Breast Center Conference, researchers examined cosmetic outcomes with the device among a group of 1,010 patients. Median age of women in the study group was 63 years.

Researchers found highly favorable outcomes with regard to cosmetic results. They concluded that among patients with two-year followup, 91.6 percent had excellent or good cosmetic results – even when radiation was delivered near the surface of the skin, within 7 mm or less of the surface.

“We looked at cosmetic outcomes in part because it is important to our patients,” said Robert L. Hong, M.D., the presenter and medical director of radiation oncology at Virginia Hospital Center. “This data points toward an additional quality of life benefit from the therapy.”

The second poster was presented at the annual meeting of the American College of Radiation Oncology (ACRO). It examined elements of radiation dosimetry with the SAVI device. Data involving 817 patients drawn from 12 clinical sites demonstrated the device's dosimetric versatility and its ability to precisely deliver radiation.

“Compared to other APBI devices, the SAVI applicator is better able to sculpt and control the radiation dosage, to deliver therapy to the targeted area and to protect healthy structures such as the chest wall and skin,” said ?erban Morcovescu, M.S., the poster presenter and a board-certified medical physicist at Texas Oncology Denton, in Denton, Texas.

Even with minimal skin separation of 7mm or less, the study data showed that the maximum dose to the skin rarely exceeded 100 percent of the prescription dose, thus eliminating skin spacing restrictions.

Breast-conservation therapy includes lumpectomy– the surgical removal of the cancerous tissue within the breast plus tissue immediately around the tumor – followed by radiation. This approach is an alternative to mastectomy, which removes the entire breast and is often followed by breast reconstruction.

Radiation treatment after a lumpectomy has traditionally involved irradiation of the entire breast with an external beam. Besides the inconvenience of the six-week-long regimen, many women must travel some distance to receive external-beam radiation. That can put additional stress on their families, jobs and financial resources.