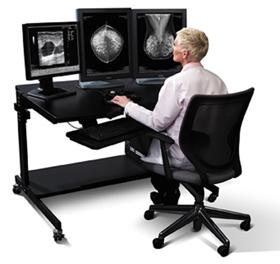 November 10, 2010 – Tools to spot, diagnose and treat cancer or detect osteoporosis in women will be the focus of products highlighted by Hologic Inc. during the 2010 Radiological Society of North America (RSNA) meeting Nov. 28 through Dec. 2, 2010 in Chicago,

Breast Screening and Diagnostic Systems
The November FDA Mammography Quality Standards Act (MQSA) scorecard reports more than 70 percent of the 8,643 breast imaging sites in the United States now have at least one digital mammography system. The company says its Hologic Selenia system leads the industry in U.S. system installs with more than all the other digital mammography vendors combined.

The Selenia Dimensions 3-D breast tomosynthesis system addresses the primary limitations of 2-D digital mammography – the superimposition of normal breast tissue. Launched in Europe in September 2008, the system delivers both conventional digital mammogram and a tomosynthesis exam - all under one compression.

Hologic has commercial breast tomosynthesis systems installed in more than two-dozen countries including Canada and Mexico. In September the Radiological Devices Panel of the U.S. Food and Drug Administration (FDA) voted unanimously that Hologic demonstrated both the effectiveness and safety of the Selenia Dimensions system. The panel also voted in favor that the benefits of this new technology outweigh the risks.

In 2010 Hologic and Barco, a global display and visualization provider, are working with the RSNA organization to deliver a series of hands-on digital mammography and breast tomosynthesis workshops during the weeklong meeting.

Breast MRI
With the acquisition of Sentinelle Medical Inc., Hologic adds a suite of breast MRI tools to its best-in-class women's health portfolio. The company believes MRI is an important standard of care in breast screening for women indicated as having a high risk of developing breast cancer. Products include the Sentinelle Breast MRI coil and the Sentinelle Aegis Breast imaging and interventional software. Built on the Aegis software platform, the Sentinelle Navigation system offers a multimodality approach to correlated image viewing and device guidance.

Until recently, consistent assessment of breast composition was hampered by widely differing technical factors and the subjectiveness of the reviewer. The Quantra volumetric assessment tool is a break-through technology designed to estimate volumes in the breast and calculate the volumetric fraction of fibroglandular tissue. The Quantra tool uses details of the X-ray imaging chain to quantify fibroglandular tissue in the breast. Quantra software aggregates volumetric measurements from each view in a study into a simple, concise assessment for each breast.

Patient Comfort
For added comfort, the MammoPad breast cushion is designed to offer a softer, warmer mammogram to help ease a patient's fear of mammography-associated pain. The cushion, which can be used with both digital and analog mammography, is radiolucent and does not require additional dose. New this year is a change in color for MammoPad to pink.

At RSNA 2010 Hologic will highlight Advanced Body Composition assessment software - commercialized in Europe and awaiting FDA clearance in the United States. It will be a feature on Discovery and combines rapid acquisition of the total body with comprehensive reporting and the new National Health and Nutrition Examination Survey (NHANES) reference data. The new color displays of fat and lean distribution combined with the new trending report are valuable tools for the clinician.