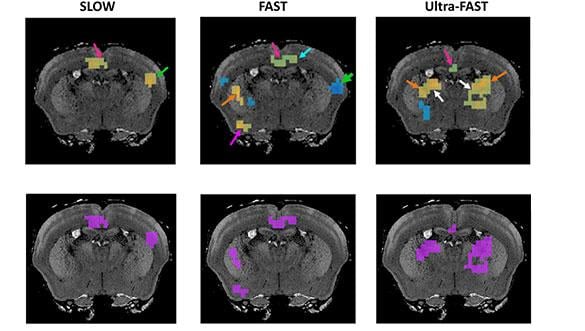 August 19, 2019 — An international team of researchers developed a new magnetic resonance imaging (MRI) technique that can capture an image of a brain thinking by measuring changes in tissue stiffness. The results show that brain function can be tracked on a time scale of 100 milliseconds – 60 times faster than previous methods. The technique could shed new light on altered neuronal activity in brain diseases.

The human brain responds almost immediately to stimuli, but non-invasive imaging techniques haven’t been able to keep pace with the brain. Currently, several non-invasive brain imaging methods measure brain function, but they all have limitations. Most commonly, clinicians and researchers use functional magnetic resonance imaging (fMRI) to measure brain activity via fluctuations in blood oxygen levels. However, a lot of vital brain activity information is lost using fMRI because blood oxygen levels take about six seconds to respond to a stimulus.

Since the mid-1990s, researchers have been able to generate maps of tissue stiffness using an MRI scanner, with a non-invasive technique called magnetic resonance elastography (MRE). Tissue stiffness can not be measured directly, so instead researchers use MRE to measure the speed at which mechanical vibrations travel through tissue. Vibrations move faster through stiffer tissues, while vibrations travel through softer tissue more slowly; therefore, tissue stiffness can be determined. MRE is most commonly used to detect the hardening of liver tissue but has more recently been applied to other tissues like the brain.

“This study has the potential to revolutionize the way scientists study brain diseases,” said Krishna Kandarpa, M.D., Ph.D., director of research science and strategic directions at the National Institute of Biomedical Imaging and Bioengineering (NIBIB), which provided partial support for the study. “Developing a new MRI technique relies heavily on physics and engineering principles, which are areas in which NIBIB investigators excel. The results would have been hard to achieve without the collaboration of this team of experts.”

Sam Patz, Ph.D., a professor of radiology at Harvard Medical School and a physicist at Brigham and Women’s Hospital Department of Radiology, explained that his initial plan was to use MRE in combination with another MRI method to study scar tissue in the lung. “I didn’t have experience with MRE, so I turned to my colleague who is a pioneer in MRE, Dr. Ralph Sinkus,” said Patz

.Sinkus, a professor of biomedical engineering at King’s College London and co-corresponding author of the Science Advances publication, helped Patz set up the MRE lung imaging experiments in his Boston lab. As the team was working on launching the lung experiments, they ran into numerous complications and decided it was easier to start with the mouse brain. Due to their exciting results, the team continued to study the mouse brain.

Patz and Sinkus were elated with the first MRE images of the mouse brain – they were of excellent quality. “We observed that the auditory cortex, which a mouse uses to hear, was a bit stiffer than other parts of the cortex. We searched for an answer but came up empty-handed,” stated Patz. “We hypothesized that perhaps the auditory cortex had increased blood flow due to the noise from the MRI scanner. The idea was that the auditory cortex capillaries were under higher pressure when stimulated; similar to when you turn on a garden hose, the hose gets stiffer.”

Patz followed up with experiments to confirm the hypothesis by blocking one or both of a mouse’s ear canals with a gel to mute the noise from the MRI scanner. “The results were dramatic,” Patz exclaimed.  “It was clear that removing the stimulus resulted in softer tissue, and that the variation in stiffness was real.”

Initially, it took the researchers about 20 minutes to obtain one MRE scan. The team was concerned the long stimulus time would lead to a reduced response after prolonged or repeated exposures, a phenomenon named as habituation.

Together Patz and Sinkus worked to create a new MRI protocol to reduce the need for a long stimulus time, to avoid habituation. The new method switches between “on” and “off” stimulus states that are created by an electrical impulse delivered to a mouse’s hind limb every nine seconds. Two images of the mouse brain are generated that correspond to each stimulus state and are subtracted to show changes in tissue stiffness. Nine seconds allows enough time for the blood flow in the activated areas of the brain to respond.

At first, the team thought that the changes in tissue stiffness were due to the changes in blood supply, another manifestation of what traditional fMRI detects. So, they decided to switch between the two stimulus states much faster than the blood system could respond.  Remarkably, the data exhibited the same robust change in stiffness after a one-second stimulus, and the researchers concluded the changes they had observed in the mice had nothing to do with blood flow.

After this result, colleagues urged the researchers to try even faster speeds. The published results show about a 10 percent change in stiffness even after the stimulus states were varied every 100 milliseconds. These results are the closest to real-time MRI brain imaging researchers have achieved to date.

Now, the group is moving on to perform a similar study in healthy human brains to establish a robust protocol. Preliminary results from human brains show alterations in tissue stiffness in times as short as 24 milliseconds.

Once the technology has been translated to human use, the pair will be able to investigate brain diseases. The technique could provide new ways of diagnosing and understanding brain activity variation in diseases, such as Alzheimer’s, dementia, epilepsy or multiple sclerosis.

Additionally, the technology may also be applied to cancer patients with large brain tumors. Sometimes a large tumor mass will block the blood flow that traditional fMRI detects, so it is not possible to obtain a good image. Since the new methods are not thought to rely on blood flow, they may be able to attain better images in these patients and help inform treatment strategies.