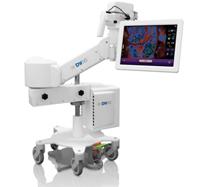 Endorsed by the U.K. National Institute of Health and Care Excellence, the new U.S. Food and Drug Administration (FDA)-cleared medical device is being praised by physicians for its ability to help identify abnormalities on the cervix, which can sometimes escape detection during a standard colposcopy.

Colposcopy is a diagnostic exam, usually following an abnormal Pap smear, in which a doctor applies a special solution to the cervix and peers into a binocular viewer called a colposcope to look for areas that turn white, indicating abnormal cells and that a cervical biopsy may be needed.

"The DySIS system is a next generation colposcope, offering important advancements that improve the examination procedure for both doctors and patients," said Christopher G. Olson, M.D., of Women's Center for Health in Naperville, one of the first OB/GYN practices in the United States to offer the new computer-assisted screening device.

The DySIS Advanced Cervical Imaging System is used by the examining physician as follows:

Olson says that a traditional colposcopy can often be very frightening for a patient because during the examination they have no idea what the doctor is looking at or thinking.

"Thirty seconds of silence can seem like five minutes, and a patient's imagination can begin to race as they assume the doctor has discovered the worst," Olson said.

With the DySIS system, Olson says a patient is able to view what the doctor is viewing in real-time and discuss the meaning of the colorized zones and markings on the DySISmap, enabling the patient to be involved and more at ease during the examination procedure.

"I was skeptical that a computer-generated image could pick up cervical abnormalities better than the naked eye, but I was wrong," Olson said. "On a colposcopic image that appeared normal to me, the DySISmap highlighted two areas of abnormalities revealing cervical dysplasia on biopsy. With the new recommendations to decrease Pap smear frequency, it is even more important that colposcopies miss nothing."

Olson says examinations performed using the DySIS Advanced Cervical Imaging System do not result in any additional out-of-pocket expenses for the patient.