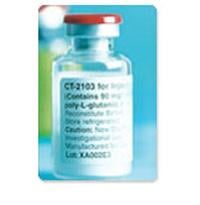 The objectives of the study are to determine if Opaxio and radiation improve progression free survival (PFS) and overall survival compared to TMZ and radiation as well as to evaluate neuro-cognitive function and toxicities of these therapies. If positive, results from the study could be used to plan a phase III study of Opaxio added to standard radiation therapy for approval in this disease.

In a recent study, treatment with Opaxio added to standard therapy with TMZ and radiation resulted in a median PFS of 13.5 months in the subset of patients with GBS (n=17). Median OS has not yet been reached, with 50 percent of patients having at least 22 months of follow-up since completing therapy. The study was presented in June 2011 by Suriya Jeyapalan, M.D., Heinrich Elinzano, M.D., and Mark Goldman, M.D., assistant professors of neurology and neurosurgery, Brown University Oncology Group at the 2011 American Society of Clinical Oncology Annual Meeting. Additional survival data are expected to be presented at the Society of Neuro-Oncology annual meeting later this year.

"The data from the earlier OPAXIO study with an overall survival not yet reached at a median follow-up of 22 months led us to quickly initiate this study. Only patients with glioblastomas without MGMT methylation will be eligible for this new study. Approximately half of all patients with glioblastomas have unmethylated MGMT and these patients have particularly poor prognosis with standard treatment with temozolomide and radiation so there is a serious unmet medical need –– particularly for MGMT-positive patients," said Howard Safran, M.D., head of the Brown University Oncology Group. "There was strong interest in participating in this study based on those data and we hope to be able to enroll this trial on schedule."

Opaxio (paclitaxel poliglumex, CT-2103), which was formerly known as Xyotax, is an investigational, biologically enhanced, chemotherapeutic that links paclitaxel, the active ingredient in Taxol, to a biodegradable polyglutamate polymer, which results in a new chemical entity. When bound to the polymer, the chemotherapy is rendered inactive, potentially sparing normal tissue's exposure to high levels of unbound, active chemotherapy and its associated toxicities. Blood vessels in tumor tissue, unlike blood vessels in normal tissue, are porous to molecules like polyglutamate. Based on preclinical studies, it appears that Opaxio is preferentially distributed to tumors due to their leaky blood vessels and trapped in the tumor bed allowing significantly more of the dose of chemotherapy to localize in the tumor than with standard paclitaxel. Once inside the tumor cell, enzymes metabolize the protein polymer, releasing the paclitaxel chemotherapy.