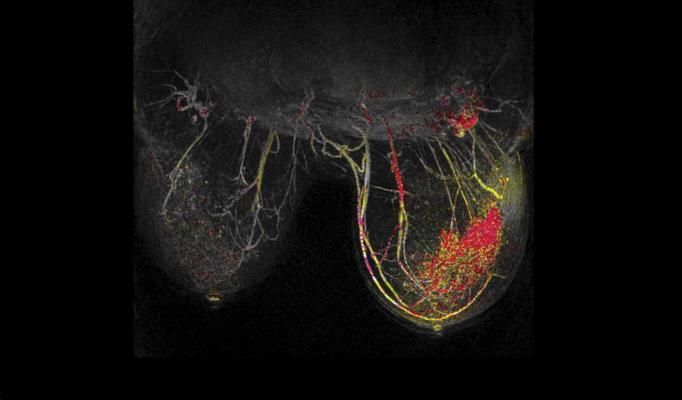 October 6, 2015 — A magnetic resonance (MR) breast imaging technique that uses no ionizing radiation or contrast agent could reduce unnecessary biopsies by providing additional information about suspicious findings on X-ray screening mammography, according to a new study published online in the journal Radiology.

Screening programs with conventional X-ray mammography have been shown to reduce breast cancer deaths; however, conventional mammography has a high false-positive rate, leading to many unnecessary biopsies. MR imaging could be a useful adjunct to mammography, but the examinations can be time-consuming and commonly require the injection of a contrast agent, which carries its own cost and potential complications.

For the new study, researchers in Germany evaluated an abbreviated MR breast imaging protocol that requires no contrast agent. The protocol uses only two short sequences: The first shows the shape and appearance of the lesion; the second displays its biophysiological properties with diffusion-weighted imaging with background suppression magnetic resonance mammography (DWIBS-MRM), a technique that works by assessing the diffusion, or movement, of water molecules through tissue. Areas of restricted diffusion may indicate malignancy.

The researchers compared DWIBS-MRM to an abbreviated contrast-enhanced MRI and full diagnostic breast MR protocol in 50 women with suspicious screening mammograms and indication for biopsy.

Twenty-four of the 50 participants had a breast carcinoma. DWIBS-MRM achieved a comparable accuracy to that of the full diagnostic and the abbreviated contrast-enhanced MRI protocols. The technique yielded an excellent negative predictive value of 92 percent. Negative predictive value represents the probability that a person with a negative test does not have the disease.

Only pure microcalcification related ductal carcinoma in-situ (DCIS) without solid tumor, a very early stage of breast cancer, was not detected by any of the MR techniques.

The results suggest that unenhanced diagnostic DWIBS-MRM may one day have a useful role in breast cancer screening, according to study lead author Sebastian Bickelhaupt, M.D., a radiologist at the German Cancer Research Center in Heidelberg, Germany.

“If the preliminary findings are confirmed, this approach could have a high potential to be used as an adjunct in the clarification process of unclear lesions on X-ray mammography in breast cancer screening,” Bickelhaupt said. “This might help to reduce the number of invasive biopsies and the related anxiety in women who have suspicious findings at mammography.”

DWIBS-MRM has advantages over other MR approaches, Bickelhaupt said. The MR images can be obtained in less than seven minutes, compared with more than 30 minutes for a full breast MR protocol. The mean reading time using the unenhanced DWIBS-MRM method is less than 30 seconds thanks to an innovative summation technique called maximum intensity projection, or MIP, that allows lesion assessment by reading one summation image instead of multiple single-slice images.

Bickelhaupt emphasized that the research is in its early stages and that DWIBS-MRM is not intended as a standalone screening modality but as an adjunct to X-ray mammography and tomosynthesis.

“While the results so far are promising, the degree of evidence is currently not sufficient to recommend the method be implemented into the screening in a general setting,” he said.