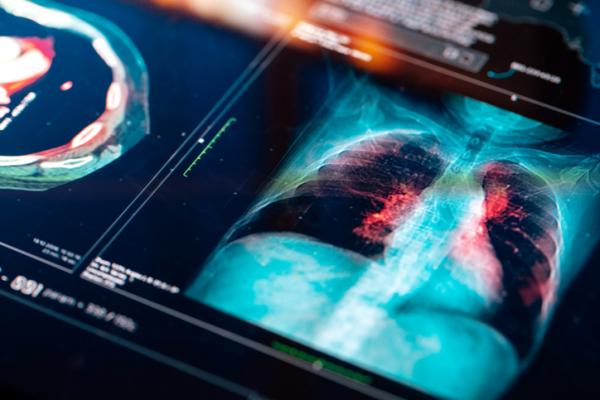 October 24, 2021 — High-dose radiation therapy can be used to lengthen progression-free survival for people with advanced lung cancer when systemic therapy has not fully halted the growth or spread of metastases, according to a new study. Findings will be presented today at the American Society for Radiation Oncology (ASTRO) Annual Meeting.

This study is the first randomized trial to test the use of stereotactic body radiation therapy (SBRT) to treat oligoprogressive, metastatic lung and breast cancer. Cancer may be considered oligoprogressive when there is a mixed response to systemic therapy, where some metastatic sites become drugresistant and continue to grow, while other tumors are suppressed by the systemic therapy and remain stable.

The current standard of care for these patients typically is to switch to a different targeted therapy or chemotherapy, but this can cause additional side effects, and an alternate drug is not always available. Adding local therapy like SBRT allows patients to stay on their current therapy by targeting only the drug-resistant lesions. SBRT, which is also known as stereotactic ablative radiotherapy (SABR), delivers precise, high doses of radiation directly to cancer sites, allowing radiation oncologists to treat tumors while sparing surrounding tissue from damage.

“For patients whose cancers appear to be oligoprogressive, stereotactic radiation to progressing sites can help them get more mileage out of their current therapy,” said lead author C. Jillian Tsai, M.D., Ph.D., a radiation oncologist and director of metastatic disease radiation oncology research at Memorial Sloan Kettering Cancer Center in New York. “These patients often have gone through multiple lines of systemic therapy before they get to us. Our study shows they don’t have to run out of options. We can use SBRT to selectively treat the sites that are progressing.”

Of the 102 patients enrolled in the study, 58 had non-small-cell lung cancer (NSCLC) and 44 had breast cancer. All participants in the trial had between one and five progressing metastatic sites that had not responded to systemic therapy; 75% had more than one oligoprogressive site. Tsai and her team randomized these patients into two groups: half received SBRT to all progressive sites, and half were treated with the standard of care, which allowed physicians to choose whether to continue their current systemic therapy or switch to another drug.

Patients were followed for 51 weeks, by which time 71 had experienced further tumor progression and 30 had died. For patients with NSCLC treated with SBRT, the median progression-free survival was 44 weeks, compared to 9 weeks for those who received standard care (p=0.004). There was no significant 2/4 difference in progression-free survival between the two groups of patients with breast cancer (18 weeks with SBRT vs. 17 weeks with standard care, p>0.05).

"We found that, for the cohort of patients with lung cancer, radiation treatment to the oligoproressive sites tended to help them stay stable and maintain a progression-free state for much longer, compared to the standard of care. However, for the breast cancer cohort, we didn't see any difference," said Tsai.

Researchers are preparing to close the trial early, after a planned interim analysis established that SBRT could extend the length of time that patients’ tumors remained stable. They are now investigating why people with lung cancer, but not those with breast cancer, responded to radiation.

Tsai said one reason for the different outcomes may be the different systemic therapy agents the patients with lung cancer have received, including immunotherapy. There could be synergy between radiation and specific drugs that enhance the effectiveness of both treatments.

Another reason, she said, could be that participants in the breast cancer cohort had disease that was already too advanced for SBRT to make a difference. “We treated these patients late in their disease trajectory—some patients had undergone nine lines of systemic therapy before coming to us. It’s possible radiation therapy might not be helpful under those circumstances but could be if patients are referred to us before they run out of other options.”

It’s also very likely that breast cancer and lung cancer simply behave differently. “Different cancers have different biology and patterns of progression," said Tsai. "The oligoprogressive state is still a hypothesis. We don’t know if this state exists for all cancers and how long it can exist before further progression occurs.”

Oligoprogresion is an emerging concept in cancer biology, and there is debate whether it exists as a unique state or is a temporary state in which tumors are simply progressing at different rates. Tsai said the research team is currently examining molecular markers to analyze differences.