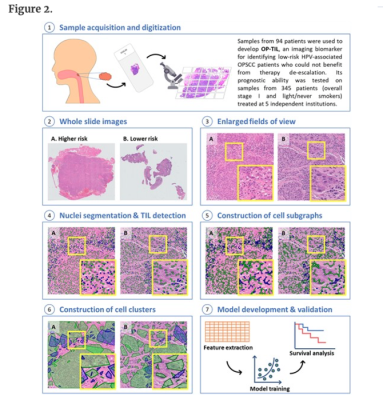 This figure illustrates the building blocks of the introduced approach. First, for computational feasibility, each whole slide image was split into non-overlapping 2,048 × 2,048–pixel image tiles. Tiles containing at least 65% of tissue were retained, and the remaining were discarded. Image color normalization (15) was applied to each tile to compensate staining variations of slides acquired from different institutions. Image courtesy of Case Western Reserve University

January 7, 2022 — A Case Western Reserve University-led team of scientists has used Artificial Intelligence (AI) to identify which patients with certain head and neck cancers would benefit from reducing the intensity of treatments such as radiation therapy and chemotherapy.

The researchers used AI tools similar to those they developed over the last decade at the Center for Computational Imaging and Personal Diagnostics (CCIPD) at Case Western Reserve.

In this case, they asked the computer to analyze digitized images of tissue samples that had been taken from 439 patients from six hospital systems with a type of head and neck cancer, known as human papillomavirus (HPV)-associated oropharyngeal squamous cell carcinoma (OPCSCC).

The computer program successfully identified a subset of patients who might have benefited from a significantly reduced dose of radiation therapy.

While that analysis was retrospective—meaning the computer analyzed data from patients in which the eventual outcome was already known—the researchers said their next step could be to test its accuracy in clinical trials.

Their research was published recently in the Journal of the National Cancer Institute.

The work was led by Anant Madabhushi, CCIPD director and the Donnell Institute Professor of Biomedical Engineering at the Case School of Engineering,  along with Germán Corredor Prada, a research associate in the CCIPD lab.

Although most others with HPV-driven cancer would still benefit from aggressive treatment—along with patients whose cancer was unrelated to the virus—the researchers said their study revealed a significant group was receiving more aggressive therapy than they needed to achieve a favorable outcome.

Clinicians are not able to easily make that distinction simply from simply looking at the tissue scans, the researchers said. So virtually all patients with these cancers—regardless of whether HPV-driven or not—are treated with a full course of chemo and radiation.

“We have been overtreating many patients with chemotherapy and radiation that they do not need because we didn’t have a way to find out which patients would benefit from de-escalation,” Madabhushi said. “We’re saying that now we do—and that someday physicians could modulate the way we care for people and not just give the standard high dose of radiation to everyone who comes through the door.”

Madabhushi said that reducing radiation for these patients could also help lessen the “toxicity of radiation therapy,” meaning that they could experience fewer side effects such as dry mouth, swallowing dysfunction and taste changes.

“There are already national clinical trials ongoing investigating the reduction of radiation therapy and chemotherapy intensity in favorable HPV positive oropharynx cancer patients,” said Shlomo Koyfman, director of head and neck and skin cancer radiation at Cleveland Clinic and a study collaborator. “However, properly selecting the ideal patients for this treatment reduction has been a challenge. This imaging classifier can help us better select patients for these novel treatment paradigms.”

Corredor said other researchers are already testing whether reducing the intensity of treatment can benefit some patients. But this new work, if validated in human trials, could provide a tool for physicians to make better decisions about who should get chemo or radiation, he said.

“Maybe we can reduce intensity of treatment for some people and give them a better quality of life because chemo and radiation often have very strong side effects,” Corredor said.

Nearly two dozen other scientists contributed, including six others from Case Western Reserve.

“We have been able to visually assess patient’s tumor microscopically for a very long time, but now, with this technology, can actually extract meaningful information from the morphology for prognosis and prediction,” said James Lewis Jr., a professor of Pathology, Microbiology and Immunology at Vanderbilt University Medical Center and a research collaborator.

Head and neck cancers total more than a half-million cases and 300,000 deaths a year, making them the sixth leading cancer worldwide, according to the World Health Organization.

HPV is the most common sexually transmitted infection (STI)—affecting about 43 million people in 2018, according to the Centers for Disease Control. Further, HPV accounts for roughly 75% of oropharyngeal cancer cases in the United States.

The imaging biomarker isolated by the Case Western Reserve-led team from routine digital pathology slides would reveal the HPV-associated cancer patients who could avoid the harsher treatment, instead receiving either lower doses of radiation or no radiation at all.

Corredor said the system was able to accurately define the “spatial arrangement, or architecture, of lymphocytes surrounding the cancer cells.” Lymphocytes are a type of white blood cell that is part of the immune system and which attacks invading bacteria, viruses and toxins.

This new work also builds on previous research by the CCIPD in developing novel imaging biomarkers for risk stratification and outcome prediction of head and neck cancer published earlier this year, one in The Journal of Clinical Investigation and the other in the journal Frontiers in Oncology.