February 5, 2009 – In the largest study to date to evaluate FDG-PET/CT (Fluorodeoxyglucose positron emission tomography combined with computed tomography) in the initial staging of inflammatory breast cancer (IBC), researchers at M. D. Anderson Cancer Center, Houston, TX, identified the precise location and extent of metastasis, offering the potential for a better prognosis for patients with this rare, but aggressive form of breast cancer.

In the study, published in the February issue of The Journal of Nuclear Medicine, researchers reported findings in 41 women between the ages of 25 and 71 with unilateral primary IBC who had originally presented with swelling, some pain and skin changes, such as rash and skin discoloration. A palpable mass was not evident on physical examination in 26 patients (63 percent), which is not unusual in this form of breast cancer, and 90 percent had no symptoms of distant metastasis (disease spread beyond the breast).

Each patient underwent a whole-body FDG-PET/CT exam. The scans showed that nearly half of the patients (49 percent) had distant metastasis, and 27 percent had disease in multiple sites. Neither finding had been previously detected by conventional imaging. These results were confirmed by biopsy and supplementary imaging.

"PET/CT is useful in staging IBC because it provides information on both the primary disease site as well as disease involvement throughout the rest of the body," said Homer A. Macapinlac, M.D., chair and professor of nuclear medicine at the University of Texas, M. D. Anderson Cancer Center, Houston, TX. "In addition to detecting the presence of cancer, PET/CT is able to demonstrate the biology of cancer - revealing how aggressive the disease is - which can help physicians develop appropriate therapy approaches."

"Breast cancer is a systemic disease, not just a local one. Most imaging modalities are localized and will therefore miss the spread of disease that is frequently present by the time IBC is diagnosed," Macapinlac said. "The use of a whole-body modality such as PET/CT with its higher sensitivity, however, allows us to pinpoint metastasis in other parts of the body; for example, behind the clavicle - which can not be detected in a physical exam - or in the abdominal organs or pelvic lymph nodes."

IBC tends to grow more quickly and aggressively than the more common types of breast cancer. Upon diagnosis, it is already considered to be at least stage IIIB (locally advanced) and even stage IV if it has spread to distant parts of the body. Because of this, IBC has been harder to successfully treat than other types of breast cancer. Knowing the extent of the disease at the start could have a great impact on the outcome for many patients, Macapinlac added.

"With FDG-PET/CT, physicians are able to accurately determine the location of metastases early in the disease process when appropriate treatment can be administered. Furthermore, a PET/CT procedure for IBC patients may be less than or equivalent to the total cost of separately imaging multiple organs and would require a single hospital visit and decreased imaging time when compared to the time required for a battery of regional staging studies," Macapinlac said.

The researchers would like to see future studies that use PET/CT earlier in the process and also to track therapy response to determine whether or not it is succeeding.

PET provides information about how the body is functioning at the cellular level, while CT provides an anatomical rendering of the inside of the body. In an FDG-PET/CT scan, the CT first produces detailed images of the inner anatomy of the body. The patient is then injected with a small amount of a radioactive drug, which is F-18-labeled glucose, and PET is performed. Because fast-growing cancer cells feed on sugars such as glucose, PET/CT delineates areas where the glucose accumulates in the body, identifying the location of cancer cells.

According to the American Cancer Society, IBC accounts for approximately 1 to 3 percent of all breast cancers diagnosed in the United States. It tends to occur in younger women, and African-Americans appear to be at higher risk. Physicians call the disease "inflammatory breast cancer" because the affected breast displays the same symptoms that occur with inflammation. However, the symptoms of IBC are not caused by infection or injury, but by cancer cells blocking lymph vessels in the skin. Patients often do not have a breast lump, and symptoms may not show up on a mammogram. Because it doesn't look like a typical breast cancer, the disease can be harder to diagnose. 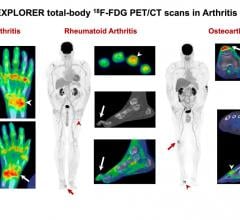 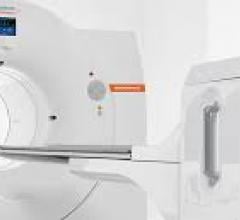