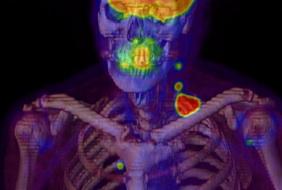 In 2013, Lymphoseek was approved to help identify lymph nodes closest to a primary tumor in patients with breast cancer or melanoma. Lymph nodes filter lymphatic fluid that flows from the body’s tissues. This fluid may contain cancer cells, especially if the fluid drains a part of the body containing a tumor. By surgically removing and examining the lymph nodes that drain a tumor during a biopsy, doctors can sometimes determine if a cancer has spread.

In February, the FDA accepted the supplemental new drug application (sNDA) and granted a priority review for the expanded use of Lymphoseek for sentinel lymph node detection in patients with head and neck cancer. The FDA grants priority review status to drug applications that may offer a significant improvement in treatment over existing options.

With today’s approval, Lymphoseek can now be used to guide testing of lymph nodes closest to a primary tumor for cancer, called a “sentinel” lymph node biopsy, in patients with cancer of the head and neck. This new indication will allow for the option of more limited lymph node surgery in patients with sentinel nodes negative for cancer.

“For some patients with head and neck cancer, removal and pathological examination of lymph nodes draining a primary tumor is an important diagnostic evaluation,” said Libero Marzella, M.D., Ph.D., director of the division of medical imaging products in the FDA’s Center for Drug Evaluation and Research. “To use Lymphoseek, doctors inject the drug into the tumor area and later, using a handheld radiation detector, find the sentinel lymph nodes that have taken up Lymphoseek’s radioactivity.”

For this new indication, Lymphoseek’s safety and effectiveness were established in a clinical trial of 85 patients with squamous cell carcinoma of the lip, oral cavity and skin. All patients were injected with Lymphoseek. Surgeons subsequently removed suspected lymph nodes — those identified by Lymphoseek and those based upon tumor location and surgical practice — for pathologic examination. Results showed that Lymphoseek-guided sentinel lymph node biopsy accurately determined if the cancer had spread through the lymphatic system.

The sNDA submission included data from the NEO3-06 Phase 3 study. That showed statistical significance of Lymphoseek’s ability to correctly identify patients with pathology-positive lymph nodes compared with multiple level lymph node dissection and pathology assessment. The Phase 3 trial NEO3-06 was a prospective, open-label, multicenter, within-patient study. It was designed to identify sentinel lymph nodes and determine the false negative rate (FNR) associated with Lymphoseek-identified SLNs relative to the pathological status of non-SLNs in head and neck and intraoral squamous cell carcinoma. The primary endpoint for the NEO3-06 trial was based on the number of subjects with pathology-positive lymph nodes following a multiple level lymph node dissection and required a minimum of 38 subjects whose lymph nodes contained pathology-confirmed disease. Of the more than 80 subjects enrolled in the NEO3-06 trial, 39 subjects were determined to have pathology-positive lymph nodes. Results demonstrated that Lymphoseek correctly identified 38 of these 39 patients, for an overall FNR of 2.56 percent, which met the predefined statistical threshold. These findings indicate that Lymphoseek accurately identified SLNs in these trial subjects, and is likely to be predictive of overall node pathology status. Moreover, multiple level nodal dissection of patients in the trial with cancer-positive lymph nodes led to an average removal of 38 lymph nodes per patient, whereas Lymphoseek on average led to the removal of approximately four lymph nodes, representing a substantial reduction in potential morbidity for patients with head and neck cancer undergoing single lymph node biopsy.

The most common side effects identified in clinical trial were pain or irritation at the injection site.