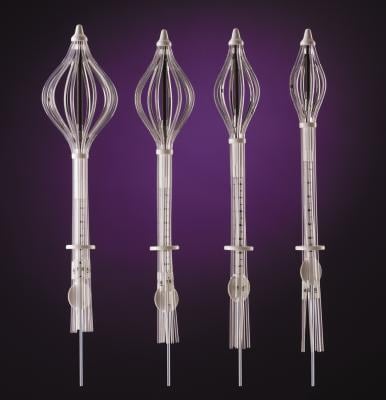 September 8, 2014 — Cianna Medical Inc., a women’s health company, announced the release of long-term data supporting the efficacy and safety of breast brachytherapy with the SAVI applicator. Researchers reported five-year results for the first 100 patients treated with strut-based brachytherapy, including favorably low rates of local recurrence and toxicities, as well as excellent cosmetic outcomes.

SAVI is a strut-based applicator that delivers a form of accelerated partial breast irradiation (APBI) known as a breast brachytherapy, a five-day course of targeted radiation for early-stage breast cancer. The five-year actuarial rate for ipsilateral breast tumor recurrence (IBTR) was 3.3 percent, and good/excellent cosmesis was reported in more than 94 percent of patients, according to the study.

“Five-year results is a significant milestone for any medical technology, and physicians should be confident offering SAVI as a safe, effective treatment for patients with early, lower risk breast cancers,” said radiation oncologist Robert Kuske, M.D., co-principal investigator of the SAVI Collaborative Research Group. “It’s encouraging to have another option to deliver highly targeted, precise radiation, as it enables physicians to treat just the area most at risk for recurrence, while reducing side effects and improving overall quality of life for our patients.”

To date, this is the longest follow-up reported by the SAVI Collaborative Research Group, which was created to study the long-term outcomes of women treated with strut-based brachytherapy. The five-year were presented at the 2014 Breast Cancer Symposium, Sept. 4-6, 2014,

“Based on our study, local control is comparable to published results for whole breast irradiation with similar follow-up, while toxicity rates and cosmetic outcomes are often superior with the strut-based device due to its ability to deliver precisely targeted radiation,” Kuske added. “Better cosmetic outcomes, along with the shortened course of treatment, can lead to higher levels of patient satisfaction, which is an important quality measure in today’s changing healthcare environment.”

Strut-based brachytherapy is used as part of breast conservation therapy (BCT), which consists of a lumpectomy followed by radiation therapy. Whole breast irradiation (WBI) radiates the entire breast, including healthy tissue and underlying structures, while breast brachytherapy delivers targeted radiation to the area immediately surrounding the lumpectomy cavity. The clinical benefits of targeted radiation like brachytherapy include reduced radiation exposure to healthy tissue, better cosmetic results, fewer long-term side effects, and preserving more treatment options in the future in the event of a recurrence or new primary cancer.

Patient eligibility for breast brachytherapy includes lower risk cancers, as well as a number of other factors, including tumor size, age, margin status and lymph node involvement. The strut-based, open architecture design of SAVI allows physicians to sculpt radiation based on patient-specific anatomy, which may increase the number of women eligible for breast brachytherapy.