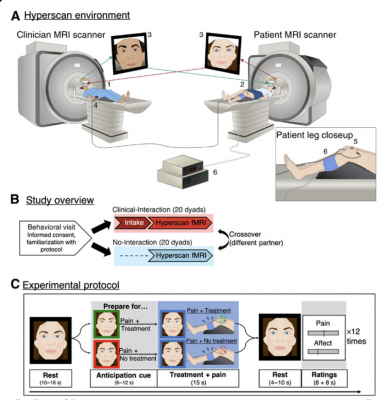 October 22, 2020 — The potential impact of the patient-clinician relationship on a patient's response to treatment is widely accepted. But until now, little was known about which parts of the brain may play a role in that interaction and which specific behaviors can influence clinical response, which is critically important to optimizing patient-clinician interactions for clinical benefit.

Now, researchers from Massachusetts General Hospital (MGH) have reported on an experiment using a novel magnetic resonance imaging (MRI)-based approach to study that interaction in real time and track the effects of different behaviors on the brain while patients and clinicians interact with one another. Their research, published in Science Advances, suggests that mirroring in both facial expressions and brain activity can affect the patient-clinician bond as well as the effects of treatment. In this case, the patients were receiving treatment for pain from an acupuncturist.

"We talk about medicine being an art as well as a science, but we know almost nothing about the neurobiology underlying the patient-clinician interaction," explained Vitaly Napadow, Ph.D., LAc, of MGH's Athinoula A. Martinos Center for Biomedical Imaging. Napadow is senior author of the paper and led this study with Ted J. Kaptchuk, director of the Program in Placebo Studies and Therapeutic Encounter (PiPS) at Harvard Medical School and Beth Israel Deaconess Medical Center.

To study this complex question, Napadow and his colleagues first devised a specialized technological platform for "hyperscanning functional MRI," or recording functional magnetic resonance imaging to track the brain's response simultaneously in two individuals — an acupuncturist and the patient undergoing treatment for pain. To their knowledge, this is the first study looking at synchronous brain activity in both clinicians and their patients during a treatment.

"Synching up with one another during interpersonal interactions may help optimize brain processing. And it has been suggested that such physiological concordance may support empathy and social bonding," said Dan-Mikael Ellingsen, Ph.D., the paper's lead author. Ellingsen, a post-doctoral fellow at the MGH Martinos Center when he contributed to the study, is now at the Department of Psychology of the University of Oslo.

To achieve this, the researchers connected two MRI scanners on the same floor. While the patient was being treated remotely with electroacupuncture and administered a moderate pressure pain, they and their clinician could communicate via video camera.

The researchers found that clinicians mirrored the facial expressions of patients expecting pain and treatment, while same regions of the brain were also activated in both parties. Those regions were parts of the neural circuitry already known to be associated with social mirroring (copying others' behavior) and the theory of mind, which describes the process of inferring another person's mental state. Both of those processes relate to empathy and have been strongly linked to activity in the temporoparietal junction, the region showing alignment in brain activity between patients and clinicians in this study.

"This study demonstrates that the clinical encounter has a demonstrable effect on the brain," said Napadow.

That realization may help answer questions such as why different patients respond differently to the same medications. In turn, it shows that the patient-clinician relationship has a measurable, quantifiable and relevant impact on the brain, emotions and clinical outcomes.

The researchers see this study as a first step towards a better understanding of the biological underpinnings of the clinician-patient relationship. "To optimize the effect of something, you have to first know how it works," said Napadow.