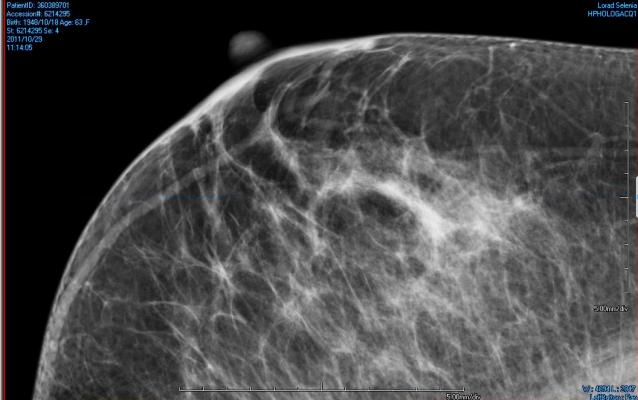 March 9, 2016 — The use of diabetes treatment, whether by diet or pills such as metformin, decreases mammographic density (MD), one of the strongest risk factors for breast cancer, whereas taking insulin appears to increase it. These findings were part of a presentation at the 10th European Breast Cancer Conference.

Although past studies have linked diabetes to MD, this is the first time that data on diabetes treatments and insulin use have been studied.

Zorana Jovanovic Andersen, M.D., associate professor of epidemiology at the University of Southern Denmark, Esjberg, Denmark, reported results from a study of 5,644 women (4,500 of who were postmenopausal) who were recruited into the Danish Diet, Cancer and Health (DCH) study group, and who attended mammographic screening between 1993 and 2001.

Similar inverse associations were found in the 44 women who controlled diabetes by diet alone, and the 62 who took oral medication for the condition. However, diabetic women using insulin injections had increased odds of having mixed or dense breasts. These associations were not modified by menopausal status or by body mass index (BMI).

"Diabetes is associated with an increased risk of breast cancer, but the exact mechanisms which bring this about are still unclear. One of the characteristics of cancer cells is their ability to grow rapidly and uncontrollably, and to resist the programmed death that occurs in non-cancer cells. Therefore, growth factors are critical to cancer development and progression. We know that insulin is an important growth factor for all body tissues, and even if we do not know exactly how it affects the development of cancer cells, it is also highly plausible that it increases breast density," said Andersen.

"Our study looked solely at the effect of insulin on breast density. Now we would like to extend our research by following up these women for breast cancer and observing the effect of different diabetes treatments on breast cancer risk. If we find a relationship, we need to examine whether a high MD is responsible, or whether other factors are involved."

The researchers also intend to undertake a larger-scale study linking data on MD from the Copenhagen Mammography Registry to data on the purchase of specific insulin treatments from the Danish Prescription Registry.

Breast density is one of the strongest risk factors for breast cancer, with women with high density breasts (more than 75 percent density) having a four to six times greater risk than women with an MD of less than 25 percent. However, the researchers emphasize that the finding that insulin treatment is associated with increased MD does not imply that it increases breast cancer risk. "Breast density is only one of many risk factors for developing breast cancer," said Andersen. "Denmark is fortunate to have such a large MD data set, which, through the DCH study group, can be linked to many different issues that may influence health outcomes. The possibility of analyzing such detailed information in a coherent group means that we have the ability to undertake additional studies in order to further investigate the relationships between breast density and other risk factors for breast cancer.

"In the meantime, we would urge all women, both with diabetes and without, to take measures to reduce their risk of developing breast cancer through simple lifestyle changes, such as avoiding obesity, reducing alcohol consumption and exercising," she concluded.

Chair of the conference, Prof. Fatima Cardoso, director of the Breast Unit of the Champalimaud Clinical Centre in Lisbon, Portugal, said: "There has been much research into the role of the insulin pathway in breast cancer, but the exact mechanisms are still unknown. This study shows clearly that a link between diabetes treatment and breast density, an important risk factor for the disease, has been made. I hope that these findings will lead to further research into the effect of cheap, easily-available drugs such as metformin, not just on breast density, but on breast cancer risk overall."