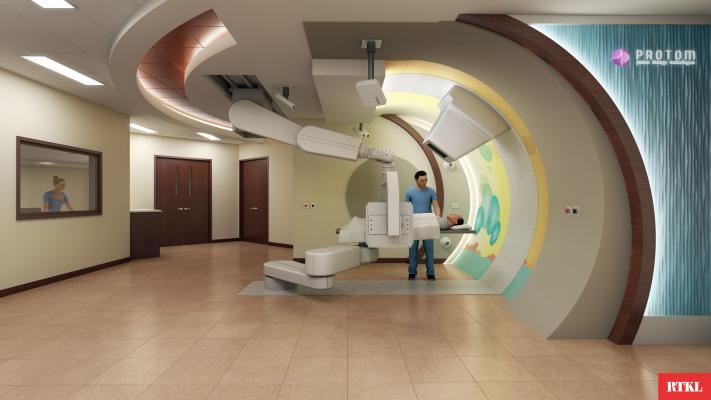 January 18, 2013 — Testing of a compact cancer treatment technology from ProTom International Inc. has demonstrated that the system achieves its design specification: delivering high-energy protons to isocenter at a beam intensity sufficient for standard clinical practice. The ProTom technical team measured stable and reproducible performance on the Radiance 330 proton therapy system at the McLaren Proton Therapy Center (MPTC) in Flint, Mich. This is the first time that ProTom has tested its compact system’s gantry beam optics design.

“Measuring high beam intensities at isocenter indicates well-functioning integration among various subsystems of the Radiance 330 necessary for clinical implementation,” said Vahagn Nazaryan, Ph.D., senior vice president of physics for ProTom. “We delivered beam through the gantry and nozzle in the first of three gantry treatment rooms as part of validation and verification of our technical design. We are pleased that the system performed as designed and quickly achieved a dose rate sufficient for standard clinical practice.”

“We are excited by the results of successful beam transport testing through our first gantry treatment room: these results were independently reproduced by our clinical physics team,” said Sung Park, Ph.D., chief physicist for McLaren Cancer Institute.

Earlier in the summer, ProTom installed a new custom-designed radiofrequency quadrupole (RFQ) proton linear accelerator (linac) injector from AccSys Technology Inc. This upgrade has significantly improved accelerated proton beam intensities. The RFQ upgrade resulted in an increase in injection intensity, yielding in excess of several times the number of protons per cycle accelerated in the synchrotron, with further tuning and optimization ongoing at McLaren.

“Both the ProTom and McLaren teams are to be commended for achieving this very significant result, which continues to validate that the system is performing as it was designed,” said ProTom CEO Stephen L. Spotts. “ProTom is focused on final validation and testing in order to secure all regulatory clearances necessary for clinical operation. It is my firm belief that our Radiance 330 system is not only the most advanced proton beam scanning system available but the most economical solution as well.“

The Radiance 330 proton therapy system has not been cleared by the U.S. Food and Drug Administration (FDA) for commercial distribution in the United States at this time.