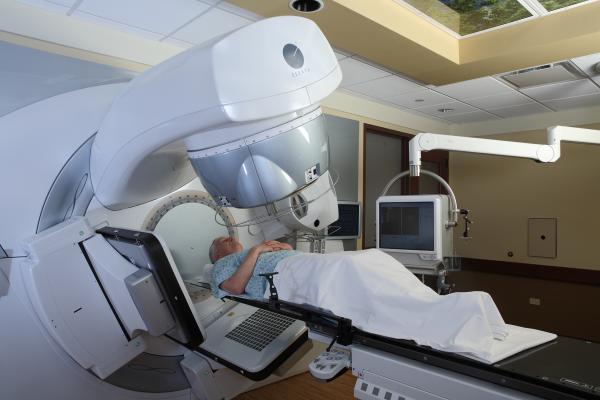 May 12, 2015 — A new study finds men with prostate cancer that has spread to nearby lymph nodes can benefit from the addition of radiation therapy to treatments that block the effects of testosterone. This combination therapy would be most effective in patients at significant risk of dying from node-positive prostate cancer. The report from investigators at the Massachusetts General Hospital (MGH) Cancer Center and the American Cancer Society has been published online in the Journal of the National Cancer Institute.

Nearly half of the patients studied nationwide with node-positive prostate cancer were not receiving combination therapy, the study found, which could potentially save their lives.

"Our analysis of a large national database revealed that adding radiation therapy to androgen-deprivation therapy decreased the risk of death in these patients by 50 percent over five years," said Jason Efstathiou, M.D., D.Phil., of the MGH Cancer Center and Department of Radiation Oncology, senior author of the study. "It appears that more aggressive local management of prostate cancer confined to the pelvis can offer more durable disease control, prevent the disease from spreading further and, for some patients, even provide a potential cure."

Whether prostate cancer has spread from the prostate gland to nearby lymph nodes can be determined either by biopsy or imaging; current tumor-staging practices put patients with node-positive disease in the same category as those whose tumor has metastasized to other parts of the body, such as bone or lung. Common thinking has been that tumors not confined to the prostate gland cannot be cured but can sometimes be controlled and patients' survival extended by androgen-deprivation therapy (ADT) — which blocks testosterone's stimulation of tumor growth — radiation therapy or other treatments. Efstathiou noted that the findings of this study potentially have important implications for such staging systems.

Current practice guidelines from the National Comprehensive Cancer Network support treating node-positive cancer with either ADT alone or with ADT plus radiation. While some evidence has suggested that adding radiation therapy improves outcomes for node-positive disease, limited data to support that possibility have been reported. The current study — designed to examine treatment practice across the country and compare patient outcomes — analyzed information from the National Cancer Data Base, which includes 70 percent of the newly diagnosed cancer cases in the U.S. every year.

"Optimal management of prostate cancer that has spread to regional lymph nodes remains largely undefined, and our finding that nearly half of such patients may be undertreated despite being at a high risk for cancer death suggests that reevaluation of current practice guidelines may be warranted," said Efstathiou, who is an associate professor of radiation oncology at Harvard Medical School. "Our results need to be validated by prospective and randomized studies, but they strongly imply that adding radiation therapy to ADT for node-positive prostate cancer can provide a survival benefit, possibly leading to durable disease control or even cure."