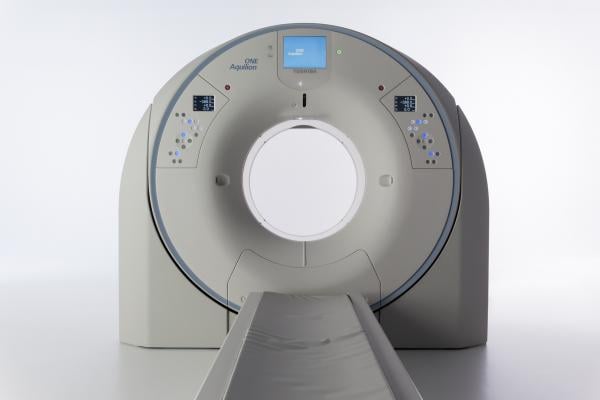 May 2, 2019 — Canon Medical has installed the Aquilion One Genesis, one of the first computed tomography (CT) scanners with artificial intelligence (AI) functionality in Europe, in Aalst’s (Belgium) General City Hospital. The installation makes it the first hospital in Belgium to boast Advanced Intelligent Clear-IQ Engine (AiCE) technology.

AiCE is the first deep learning reconstruction method using AI to produce highly detailed images with extremely low noise. With its eight powerful graphics cards, the Aquilion’s AI application has a computing power approaching that of IBM’s Watson. Canon Medical spent approximately five years working on the development of the AI component and trained the algorithm with more than 100,000 scans.

Thanks to the application of AI, the scans made by the Aquilion One Genesis are not only much clearer than those made by competing systems, but they also require the use of very little contrast agent and expose patients to far less radiation. While Canon Medical states that the system can realize radiation reductions of 20 percent, and even 40 percent for cardiac CTs, Eddy Van Hedent, M.D., of the Aalst General City Hospital believes that the reductions are far more pronounced for his department. “Whereas previously we recorded an annual exposure of 10 mSv for thoracic and abdominal scans, we now realize annual values lower than 5 mSv, because each scan only produces about 1 mSv of radiation. These extremely low doses will allow us to develop a screening program for lung tumors in the future, using the same dose of radiation as for a traditional lung X-ray,” he said.

Canon is currently working on the final phase of applying AI in post-processing. Specifically, this will allow Vitrea, the visualization platform developed by Canon Medical, to automatically indicate that a certain pathology has been detected in a particular patient. Based on the collected data from all scans, the system will also be able to tell doctors which patients should be prioritized and which cases are not quite as urgent.

“The Aquilion One Genesis is extremely energy-efficient, and though this may be a side issue for us and our patients, it is rather pleasing for environmental and financial reasons. The user-friendliness of the Aquilion One Genesis is optimal, both for us and for our patients, its speed, low radiation and image quality are fantastic, and its future prospects are phenomenal,” Van Hedent concluded.

Watch the VIDEO: Editor’s Choice of the Most Innovative New Artificial Intelligence Technologies at RSNA 2018, which includes the Aquilion One Genesis.