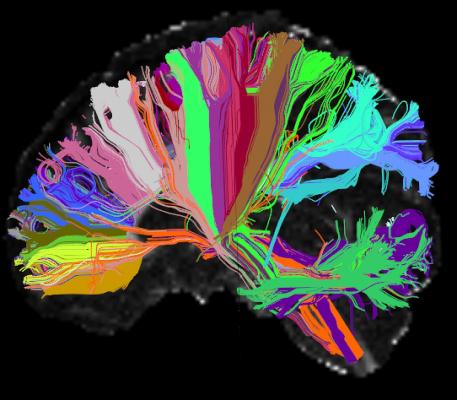 June 8, 2016 — Scans of an individual’s brain activity are emerging as powerful predictive tools, thanks to the Human Connectome Project (HCP), an initiative of the National Institutes of Health. Recently reported studies based on HCP neuroimaging and psychological data show that individual differences in brain connectivity can reliably predict a person’s behavior.

One study found that an individual’s unique resting state connectivity “fingerprint” can accurately predict fluid intelligence. Another developed a model that similarly predicted individuals’ performance on a variety of tasks, including reading and decision-making. Notably, no brain scans or psychological tests were required specifically for these studies; instead, the researchers drew upon a trove of shared data from more than 1,000 subjects made available by the HCP.

This database is one of the achievements being showcased this month, as the NIH celebrates completion of the HCP’s first phase. A symposium, open to the public, spotlighting HCP’s successes to date, will be held on the NIH campus in Bethesda, Md., on June 20, and will also be videocast worldwide.

In 2010, NIH awarded two HCP grants to map the human brain’s connections in high resolution. The aim was to understand the connections of the healthy human brain to establish a baseline that would help identify connectivity abnormalities in brain disorders. The grants supported two research consortia, one led by researchers at Washington University in St. Louis and the University of Minnesota; the other led by investigators at Massachusetts General Hospital (MGH)/Harvard University, Boston, and the University of California Los Angeles (UCLA).

In parallel, researchers at Washington University and the University of Minnesota led a multi-institution consortium that comprehensively mapped long-distance brain connections and their variability in 1,200 healthy adults (twins and their non-twin siblings), using both MRI and magnetoencephalography. By pairing studies of structural and functional brain connectivity with extensive behavioral and heritability measures, the project has provided data about brain connectivity, its relationship to behavior, and contributions of environmental and genetic factors to individual differences in brain circuitry.

Technical advances achieved during the project have transformed the field – for example, enabling much more efficient data collection by dramatically shortening the duration of scans while maintaining high-resolution images. The wealth of data gathered has been shared with the wider neuroimaging community via a data archive supported by NIH. These user-friendly tools for data mining, analysis and visualization are enabling discoveries such as those on the predictive power of individual scan data.

The June 20 symposium will also feature reports on the second phase of the HCP, which will collect data from healthy subjects across the human lifespan and from individuals with specific clinical diagnoses.

The HCP is a project of the NIH Blueprint for Neuroscience Research. This collaborative framework includes the NIH Office of the Director and 15 NIH institutes and centers that support research on the nervous system. By pooling resources and expertise, Blueprint identifies cross-cutting areas of research, and confronts challenges too large for any single institute or center.