The Wow Factor And The Future 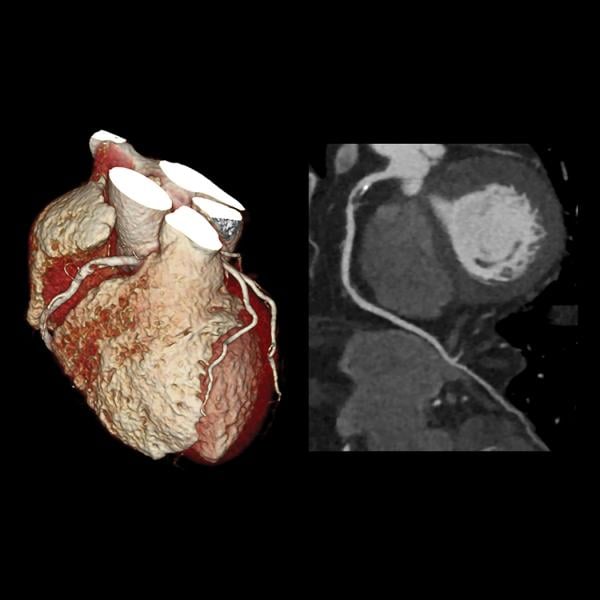 There was a time when cardiac cath was the only way to see what was happening in the heart. Today that can be done with mainstream computed tomography (CT) — not one souped up for cardiology, ones intended for radiological applications, ones that can freeze the motion of the human heart noninvasively. Wow.

To appreciate where and how far we have come — and how far we might go in the future — we have to look back to where and from what we came. And pause to realize ... how ... the pace ... of progress has quickened.

Three centuries elapsed from William Harvey’s description of blood circulation in 1628 to when Werner Forssmann performed the first human heart catheterization in 1929.1 Toshiba unveiled at RSNA 2007 the first commercial CT capable of freezing heart motion with a single rotation. Less than a decade later, the company introduced a mainstream scanner capable of making stop-action heart images that are as good or better.

We have come so far that imaging manufacturers no longer aspire to make machines capable of such “moon shot” images. They are making ones that produce previously incredible pictures efficiently, cost effectively and in ways that impose the least possible burden on patients. (Case in point: Toshiba’s latest generation of CTs produces whole-heart images at a fraction of the radiation dose required by their early predecessors.)

And just as the future will be less than ever about spectacular images, it will be fueled by what we do not see.

A revolution is brewing in the ones and zeros of computers — a revolution in intelligence, an artificial intelligence comprised of algorithms that distill human reasoning into machine thought.

Already these deep learning (DL) algorithms are examining medical images, determining the kind of information needed to form a diagnosis, then pulling that information together. They display images from prior exams of the patient in the same orientation, registering those images to ones in the current exam, so they can be easily compared. They extract patient demographics from electronic medical records, as well as the results of lab studies and conclusions from past reports, displaying them in the context of radiological images.

Those algorithms aren’t in the future. They are here. Ready for market. Although they do what people had previously done, and doing so requires understanding, their tasks are routine, laborious and time-consuming. But that will change.

As the power of artificial intelligence (AI) grows, companies will reach beyond the routine. DL algorithms today are being groomed to identify trends and uncover patterns. Ultimately they may assist in actual decision-making.

Will radiologists be replaced? Absolutely not. Unless, of course, they want to be. And that is the rub.

Consider the man last summer who touted the incredible abilities of his driverless Tesla Model S. He posted YouTube videos of the car driving itself — literally driving itself. He was just a happy-go-lucky passenger, sitting in the driver’s seat but not driving — until that driverless car mistook the side of a tractor trailer for sky and crashed into it at full speed.2

Today that man is dead, a fatality of misplaced trust.

Stephen Hawking and Elon Musk can wring their hands all they want about the coming singularity, the moment when machines are smarter than people. And they have (“5 Very Smart People Who Think Artificial Intelligence Could Bring the Apocalypse,” Time, Dec. 2, 2014, http://time.com/3614349/artificial-intelligence-singularity-stephen-hawking-elon-musk/). They worry in the press and at conferences that machines will take over; be the end of humanity. (Never mind Musk, at the helm of Tesla, is a chief developer of AI.)

The singularity does not worry me. Much more concerning is how willing we, as individuals, are to cede control over our lives.

I worry that, when the time comes, we will hand over our world to machines. Not reluctantly. Not after an inglorious fight. But willingly. And gladly. And we will do so with love.

Americans love machines. I love machines. Why wouldn’t I? They throw snow further than I can shovel it; get me from place to place quicker than I can run; heat my home; light dark rooms; bring me amazing pictures on my television, computer and smartphone.

Will AI be perceived as just another amazing machine built to make our lives easier?  Millions already do. They talk every day to Apple’s Siri and Microsoft’s Cortana and Amazon’s Alexa. The sale of Amazon’s Echo boomed this holiday season.3

They know a machine is talking to them. Giving them suggestions. Helping them make decisions. Doing what they used to do for themselves. Do they care? It doesn’t seem so.

That raises the question: Where do we draw the line?

In medicine, at least, that line is tight to the toes. At least for the time being. But soon papers will appear in respected medical journals describing the remarkable accuracy of AI; how computers make tireless assistants; how AI makes expert diagnosticians of everyone. Will someone somewhere sometime be in a rush and defer to the machine — and get away with it? Will they do it again? Will more physicians follow suit, until one day we wonder how we got where we are?

If that happens, we will have gotten there because, after decades of trusting machines, we crossed a line. We delegated something that was uniquely human to machines ... responsibility. We got lazy ... and machines picked up the slack. Wow.

Greg Freiherr has reported on developments in radiology since 1983. He runs the consulting service, The Freiherr Group. Read more of his views on his blog at www.itnonline.com.&nbsp;