Sonographic Smartphones: When Will the Potential Be Met? 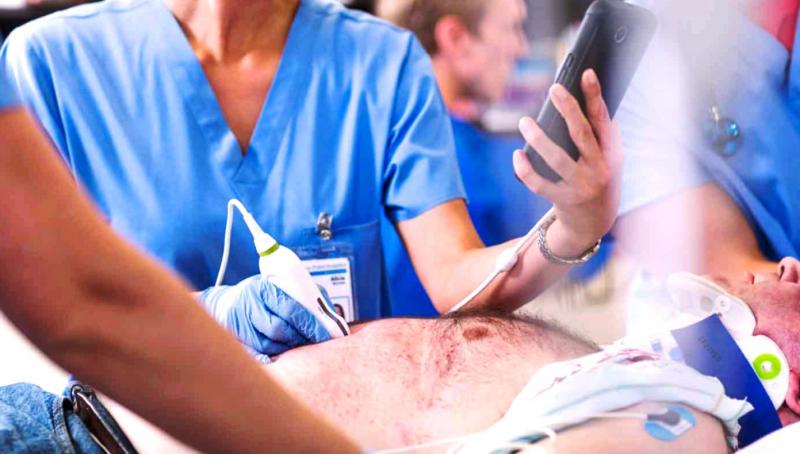 Already last century (it feels strange writing that) someone, somewhere realized that laptops had enough horsepower to run simple ultrasound machines. Not long after that transducers were plugged in and … voila! The first consumer-based ultrasound scanner was born.

They were cumbersome, certainly by today’s standards. And underpowered. To say they never “caught on” would be generous. (I never heard of anyone using one. Or at least admitting to doing so.) But they were the beginning of a concept now being expressed in smartphone-powered sonography systems. With one notable exception, smartphone sonography has failed to live up to its potential.

One example is iBABY. Billed as a home ultrasound device, its vendor aims to “enhance the pregnancy experience directly from your phone.” Just connect iBABY and iPhone and the combination “can capture ultrasound images of an unborn baby,” according to the company, which suggests that, using Wi-Fi or a built-in printer, “doctors, family members and friends” can share in the images. “On top of all that,” wrote the vendor, “the device also doubles as a baby monitor after the little one comes home!”

Few — if any — healthcare professionals would recommend the use of ultrasound by the average consumer. Caution about fetal ultrasound is warranted especially in the wake of a study published Sept. 1 in the journal Autism Research, which suggests that first-trimester fetal ultrasound may contribute to the severity of autism symptoms. “These results also add weight to on-going concerns expressed by the FDA about non-medical use of diagnostic ultrasound during pregnancy,” the authors wrote in their paper.

Unlike iBaby, another smartphone-compatible scanner, dubbed MobiUS, is not being marketed to consumers. Rather its market is comprised of healthcare workers in countries where ultrasound technology is scarce. For the time being, the scanner comes with its own Windows table or smartphone. But future versions may be compatible with Apple and Android operating systems.

On the lowest fringes of low-end technology — actually more like joke technology — is BabyUltraSound, a downloadable app that runs on the iPhone. “Launch the app and put your Iphone (sic) against your belly or your girlfriend's belly to see if you/she is pregnant,” writes the developer of this app. “What a great way to make your girlfriend jump with surprise when she sees she is pregnant!!!”

This is wrong on several levels. Most fundamentally, the lack of a transducer makes it impossible for BabyUltraSound to generate an ultrasound image. But, before becoming irate (as I did at first), be sure to read the app description in its entirety, particularly the ending, which says “PS: Of course Baby UltraSound is not a real ultrasound examination device and should only be used for joke purposes.”

“With Lumify, high-quality portable ultrasound is available almost anywhere. Just subscribe, download the Lumify app, plug in the transducer, and you're set,” proclaims the Philips Lumify webpage. The company says Lumify allows physicians to “meet patients at the point-of-care, make a faster diagnosis, and deliver care whenever it’s needed.”

In the context of what smartphones might do in radiology, the Philips application illustrates the already substantial computing power being tucked in our pockets. This innovative app could be the forerunner of many such devices, whose use will be made possible by the continuing evolution of smartphones. Value medicine, with its unprecedented emphasis on cost, may provide the spur needed for more Lumify-like devices.

Of course, unlike the transmission and display of medical images, smartphones inherently lack some of the hardware needed to perform sonography. That “peripheral” — the transducer — could come at a hefty price, although Philips has overcome this hurdle through its subscription business model.

Less tractable may be regulatory considerations. The makers of zero-footprint viewers, for example, worked for years to get their products on the U.S. market. The FDA is sure to scrutinize any medical claims for sonographic smartphones. (Aside from an inference that IBABY images might be shared with “doctors,” no medical claims for that product are apparent. And MobiUS’ developers are looking at markets outside the U.S.)

But again, Philips has worked through the challenge to bring its Lumify product to the U.S. market. So it falls to Philips to advocate the use of smartphone sonography. And the company has done pretty well.

For Lumify even to function in the rarified clinical atmosphere of diagnostic scanners is an accomplishment in itself, one that directly addresses the potential of smartphones in routine clinical practice.