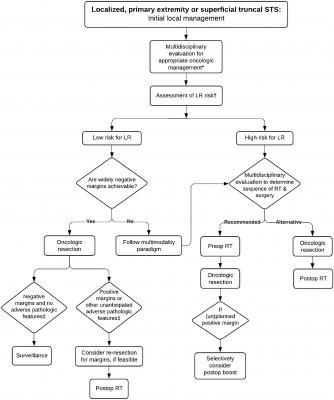 July 27, 2021 — A new clinical guideline from the American Society for Radiation Oncology (ASTRO) provides guidance on the use of radiation therapy to treat adult patients with soft tissue sarcoma (STS). Recommendations outline optimal radiation dosing, techniques and treatment planning for patients with localized, operable STS of the trunk (i.e., chest wall, abdominal wall) and extremities (i.e., arms, legs), with a focus on preserving long-term functionality through individualized care. The guideline additionally addresses the role of radiation therapy for retroperitoneal sarcoma. The guideline, ASTRO’s first for sarcoma, is published in Practical Radiation Oncology.

While soft tissue sarcomas are rare — accounting for approximately 1% of adult malignancies — they are potentially lethal tumors that comprise more than 50 different subtypes. These tumors form in the body's connective tissues, such as muscles, blood vessels, fat or nerves, and they can occur throughout the body, including the hands or feet where more-common carcinomas generally do not grow.

Management of STS requires nuanced and coordinated care from a multidisciplinary team of surgical, orthopedic, medical and radiation oncologists, as well as specialized pathologists and radiologists. Because not all patients are able to receive treatment at high-volume centers where physicians have experience managing these rare tumors, comprehensive guidelines are essential to guide treatment decisions.

"Management of soft tissue sarcoma can be complicated, with the potential for poor outcomes and significant morbidity if treated suboptimally. The addition of radiation therapy to surgery reduces the chance of local recurrence," said Kilian E. Salerno, M.D., vice chair of the guideline task force and a radiation oncologist at the National Cancer Institute. "This guideline stresses the importance of multidisciplinary input prior to initiation of treatment and provides detailed recommendations on indications for radiation therapy, dose and planning techniques. ASTRO developed this guideline to provide clear guidance on the role of radiation therapy in patient-centered, multidisciplinary oncologic care."

"When radiation is indicated, it generally should be given before surgery because the long-term side effects are less severe," said B. Ashleigh Guadagnolo, M.D., MPH, chair of the guideline task force and a professor of radiation oncology at the University of Texas MD Anderson Cancer Center. "The side effects of preoperative radiation therapy can be serious, but they are reversible. Postoperative radiation therapy side effects, however, are, in many cases, permanent because more radiation dose is required when given after surgery, and it often needs to be given to a larger area of the body."

"Research on patterns of care in the U.S. indicates that most radiation therapy for STS continues to be given postoperatively, however. Therefore, there is a need for clear clinical guidance on modern treatment approaches that can have less impact on patients' long-term quality of life," she added.

Recommendations in the guideline address patient selection for radiation therapy and outline best practices for dosing, sequencing, planning and image guidance for extremity and superficial truncal STS, as well as for retroperitoneal sarcomas, which offer a worse prognosis than those in the extremities. The guideline also calls attention to the fundamental role that cooperation between the multidisciplinary care team has in the design and delivery of patient care. Key recommendations are as follows:

The guideline was based on a systematic literature review of articles published from January 1980 through September 2020. The multidisciplinary task force included radiation, medical, orthopedic and surgical oncologists, a radiation oncology resident, a pathologist, a medical physicist and a patient representative. The guideline was developed in collaboration with the American Society of Clinical Oncology, Musculoskeletal Tumor Society and the Society of Surgical Oncology, and endorsed by the Canadian Association of Radiation Oncology, European Society for Radiotherapy and Oncology, the Musculoskeletal Tumor Society, the Royal Australian and New Zealand College of Radiologists and the Society of Surgical Oncology.