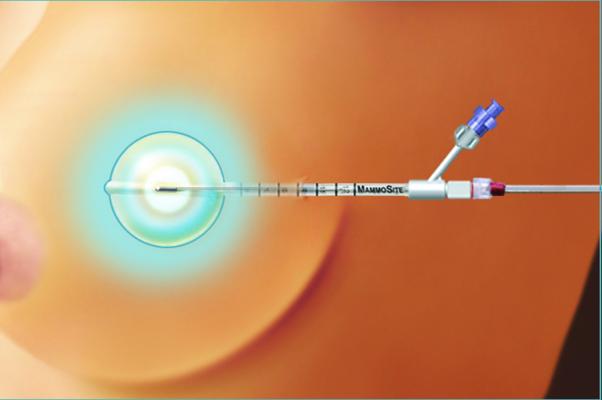 Breast cancer patients often receive radiation therapy (RT) after breast-conserving surgery to help lower the chance that the cancer will recur or metastasize in the nearby lymph nodes. WBI using external beam radiation is a longstanding standard RT for breast cancer patients, during which the entire breast and often the surrounding chest area receives radiation for several weeks, followed by an extra boost of radiation to the area where the cancer was removed. Many women in the United States who are eligible for breast conserving surgery still choose to undergo mastectomy in the hopes that it will make subsequent WBI unnecessary, due largely to the long-duration of WBI and/or because of fears concerning the potential side effects of radiation to surrounding organs.

APBI with multicatheter brachytherapy is a technique that delivers the effective radiation dose directly to the tissue at risk, which reduces the administration period and limits adverse side effects, particularly the burden on surrounding tissues of the heart, lungs and skin. The compact timing of APBI therapy is particularly significant for elderly patients, working women and those who live a significant distance from a radiation treatment facility.

This phase III study was conducted from April 2004 to July 2009, across 16 centers throughout Europe. The trial compared the results of 1,184 patients aged 40 or older with early-stage breast cancer (0, I and IIA) who received breast conserving surgery and were then randomly assigned to receive either conventional treatment, consisting of 50 Gy WBI with tumor bed boost of 10 Gy for approximately seven weeks, or APBI using interstitial multicatheter brachytherapy for five days. Median follow-up of patients was 6.6 years, and baseline factors were evenly distributed across arms. The primary endpoint was local recurrence. Secondary endpoints were incidence and severity of acute and late side effects, cosmesis, cumulative incidence of lymph node metastases and distant metastasis, overall survival (OS) and disease-free survival (DFS).

“The results of our study show that, at present, multicatheter brachytherapy is an attractive and viable APBI treatment option for low-risk breast cancer patients after breast conserving surgery,” said Vratislav Strnad, M.D., Ph.D., lead author of the study and professor in the department of radiation oncology at University Hospital Erlangen, Germany. “The results were not totally surprising, because as we were preparing our phase III trial the first long-term results of several smaller phase II trials were published showing low recurrence rates after breast-conserving treatment and APBI in comparison to WBI. What is surprising, however, is how clear the results are. Our favorable results are in contrast with the disappointing and controversial results reported from other studies that used other APBI techniques, such as intraoperative and external beam radiation therapy.”

Prior recommendations have indicated that patients should be at least 50- (ESTRO) or 60 years old (ASTRO) before receiving APBI. However, this study demonstrates excellent results in all participant age groups, including those aged 40 and older. Further research and analyses will need to be conducted to determine recurrence rates among different age subgroups at follow-up beyond five years.