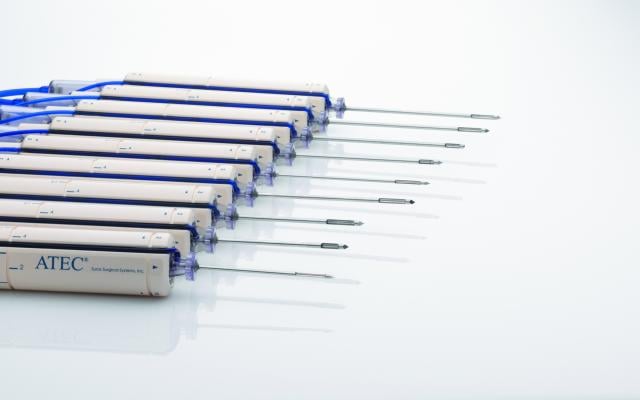 November 19, 2013 — Breast biopsies can adversely affect short-term quality of life, and the effects are more pronounced in younger patients, according to a new study published online in the journal Radiology.
More than 500,000 women in the United States have a breast biopsy each year. In the percutaneous method, a physician uses a needle to remove several small samples from the area of interest for pathological analysis. Percutaneous biopsies are associated with fewer complications than the surgical approach, but there are still significant short-term side effects, including pain and emotional distress.
“Short-term experiences can have a long-term impact,” said Janie Lee, M.D., M.Sc., associate professor of radiology, University of Washington School of Medicine and director, Seattle Cancer Care Alliance (SCCA). “If people have a less-than-positive experience during biopsy, then they might be less likely to come back for screening the next time they are due.”
To learn more about the impact of percutaneous biopsy, researchers at Massachusetts General Hospital (MGH) surveyed women two to four days after the procedure. They used a tool called the Testing Morbidities Index (TMI), a survey that assesses short-term quality of life based on seven attributes, including pain/discomfort and fear/anxiety before and during the procedure and physical and mental function afterwards.
The patients rated each characteristic on a scale of one to five, and the final score was adjusted to a scale ranging from 0 for the worst possible experience to 100 for no adverse quality of life effects.
The 188 women, ranging in age from 22 to 80 years, had a mean TMI score of 82 out of 100. Patient age was the only significant independent predictor of the TMI score, which decreased by approximately three points for every decade decrease in age. The mean TMI score for women less than 40 years old was 76.4.
“The most important result from this study is that women have short-term decreases in quality of life related to breast biopsy,” said Lee. “When we looked at the predictors of quality of life score, we found that the strongest predictor is younger age.”
Lee noted that the results are surprising at first glance, considering that younger women as a group generally are healthier than their older counterparts. She pointed to the significant role of anxiety as a major factor in explaining the differences.
“The prospect of life-threatening disease can produce a lot of anxiety in anyone,” Lee said. “Younger women typically have less experience with the health care system in general, and it may be their first time going through a diagnostic testing experience.”
The study findings suggest that tailored pre-biopsy counseling may better prepare women for percutaneous biopsy procedures.
“By better explaining what patients can expect during the biopsy experience, we can minimize anxiety before and after the procedure,” Lee said.
Researchers at MGH, led by Shannon Swan, M.D., are using the TMI tool to study other screening experiences like colonoscopy to learn ways to improve the diagnostic testing process for patients.
For more information: radiology.rsna.org, www.rsna.org