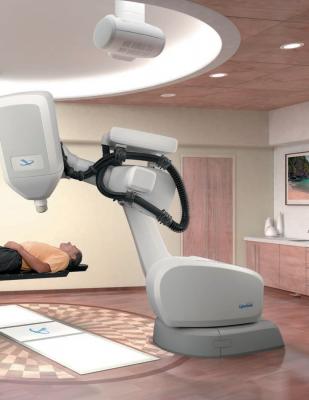 May 3, 2012 — Accuray Inc. announced the launch of the Prostate Advances in Comparative Evidence (PACE) study, an international multicenter randomized study to compare CyberKnife Stereotactic Body Radiation Therapy (SBRT), da Vinci assisted and manual laparoscopic surgery, and conventionally fractionated intensity-modulated radiation therapy (IMRT) for the treatment of localized prostate cancer. The PACE study aims to build upon the foundation of published evidence for CyberKnife prostate SBRT by creating comparative evidence to support its future potential as the gold standard in the treatment of organ-confined prostate cancer.

Currently there is no clear gold standard for localized prostate cancer treatment. A lack of comparative clinical data has prevented definitive conclusions to be drawn as to which therapy can be considered the preferred treatment for localized prostate cancer. Treatment decisions have often been made based on historical experience, aged comparisons of older treatment techniques or single modality experiences. Physicians and leading industry groups, including The Agency for Healthcare Quality and Research (AHRQ) and the Medicare Evidence Development and Coverage Advisory Committee (MEDCAC), have called for a randomized study comparing the most popular treatment options to bring clarity to the treatment landscape.

The PACE study was created by a consortium of leading academic centers in Europe — including Royal Marsden NHS Foundation Trust in the United Kingdom, Center Oscar Lambret in France, Charite–Universitatsmedizin in Germany, Erasmus MC-Daniel den Hoed Cancer Center in the Netherlands, and Mount Vernon Cancer Centre in the U.K. — and is comprised of two parallel randomized arms:

The ultimate goal of the study is to compare the outcomes of CyberKnife prostate SBRT, in terms of efficacy, toxicity and quality of life, to da Vinci prostatectomy, manual laparoscopic prostatectomy and conventionally fractionated IMRT for early-stage organ-confined prostate cancer. The study is expected to involve 30-40 centers globally and accrue more than 1,000 patients who will be followed for 10 years. Study leaders anticipate collecting and reporting data outcomes at several interim points including one, two and five years post-treatment.

"In light of a lack of definitive, comparative data supporting any one option as the best treatment choice, about 75 percent of low-risk prostate cancer patients in the [United States] receive surgery," said Nicholas van As, M.D., consultant clinical oncologist at the Royal Marsden NHS Foundation Trust in London. "The goal of the PACE study is to create the data needed to compare outcomes of treatment with CyberKnife prostate SBRT to surgery and IMRT, which are the accepted standard treatments for organ-confined prostate cancer, to allow informed treatment decisions to be made."

"An increasing number of patients are attracted to treatment with the CyberKnife System due to its unique ability to precisely treat the prostate while avoiding surrounding healthy tissue and critical structures, offering an effective treatment for early-stage prostate cancer," said Euan S. Thomson, Ph.D., president and CEO of Accuray. "The rapidly expanding base of CyberKnife prostate SBRT published studies supports the benefits of this treatment for patients. Accuray believes in taking the lead in supporting studies, such as the PACE study, that will generate clinical data to support the benefits of technical innovation and provide the highest level of comparative evidence for the benefit of prostate cancer patients worldwide."

Since CyberKnife prostate SBRT emerged as a viable treatment option for prostate cancer in 2002, it has quickly gained acceptance due to the combination of favorable clinical outcomes, as well as unique quality-of-life benefits for patients during and post-treatment. To date, 14 peer-reviewed studies involving more than 700 patients have been published showing the long-term efficacy of the non-invasive CyberKnife system in terms of disease-free survival, toxicity and preservation of sexual function. Based on the data, including five-year patient outcomes, most Medicare carriers across the country now provide coverage for prostate cancer patients seeking treatment with the CyberKnife System.

For more information about the PACE study: www.clinicaltrials.gov/ct2/show/NCT01584258