Productivity and Patient Benefits May Come From Wire-free Lumpectomy 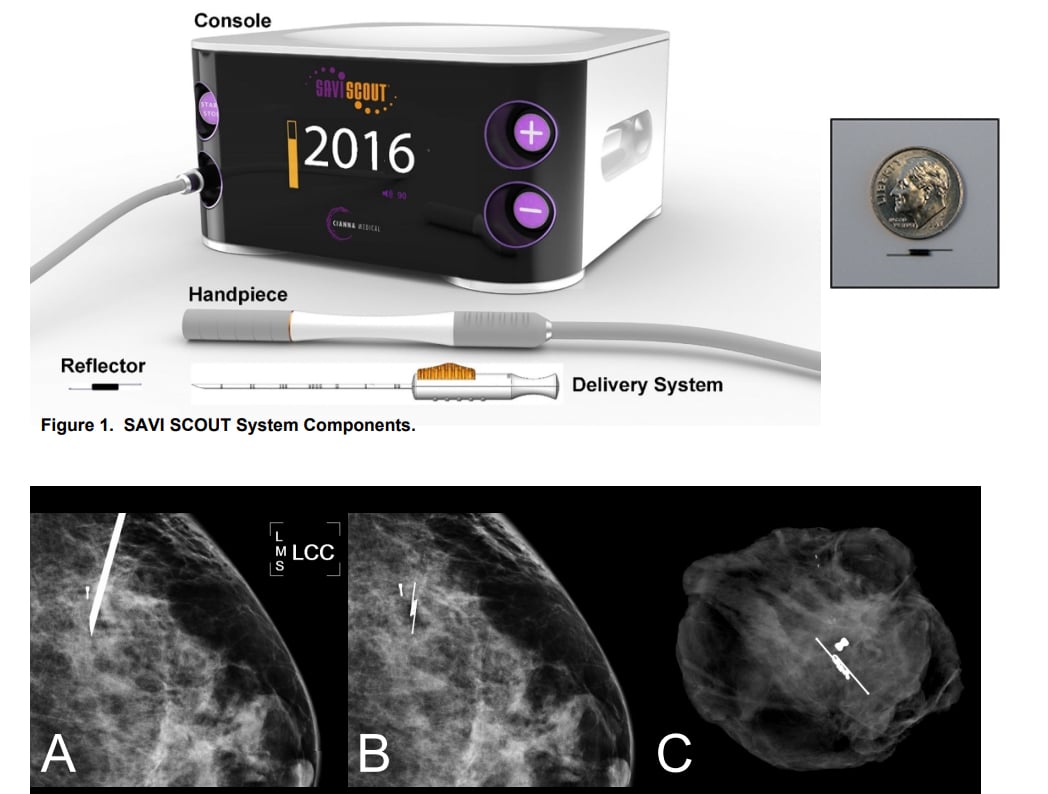 The Cianna Medical Savi Scout Radar Localization system, showing the console, detector and the marker, with a size comparison and X-ray images inside breast tissue. For more information on the learning curve of its use http://sabcs16.posterview.com/nosl/p/P1-11-06.

Wires have traditionally been placed prior to lumpectomy to mark cancerous tissues in the breast. Wire-free localizers, however, provide alternatives. And their clinical applications may expand.

On the exhibit floor of the Society for Breast Imaging (SBI)/American College of Radiology (ACR) Breast Imaging Symposium in Hollywood, Fla., two vendors described replacements for the wires that cancer surgeons have for years relied on to guide them to potentially malignant breast tissue.

At the symposium, Cianna Medical featured the implant of a tiny radar reflector in place of a wire. Leica Biosystems’ Mammotome showcased a magnetic seed for implantation, as well as a magnetic liquid injectable that accumulates in the sentinel lymph node, which surgeons may remove from patients undergoing mastectomy. The FDA has approved the Mammotome tracer for use specifically in patients undergoing mastectomy for breast cancer.

Providers may choose another type of breast cancer localizer, a product obtained last year by Hologic through its acquisition of Faxitron Bioptics. The device uses a miniature radiofrequency tag designed to be implanted in the breast and reside there for more than 30 days prior to surgery.

How Eliminating Wires Can Benefit Patients And Hospital Staff

Patients undergoing lumpectomy, a surgical procedure common in breast conservation, traditionally have wires implanted to guide the surgeon to the cancer. These wires, however, can restrict the activities of patients, as well as those of physicians.

The wires, which protrude from the breast, can keep patients from going home. Consequently, they may have the wires implanted the morning of surgery. Radiologists must arrange their schedules to do the implantations the same day as the lumpectomies. And surgeons who depend on the wires must schedule procedures after implantation. Any delay in the implantation may cause problems for the surgeons as well as scheduling the operating room.

“So not only is (wire-free localization) better for the patient, it is more efficient,” said Mike Numamoto, vice president of marketing for Cianna Medical, which makes the Savi Scout Radar Localization system.

On the exhibit floor of the breast imaging symposium, Cianna showcased productivity and efficiency gains that might be derived from the use of the Scout system. Leica Biosystems/Mammotome focused on the utility of its injectable tracer, which is engineered to be uniform and small enough for rapid migration, according to the company, yet large enough to be mechanically filtered by the sentinel lymph nodes.

The most recent update of Cianna’s Scout allows physicians to localize the implanted reflector to within 1 mm, according to Numamoto. The radar signal is fired by a handheld wand and reflected by the implant. The signal is then processed and displayed by the Scout console to indicate the distance between the wand and the reflector.

As used during lumpectomy, the wand may first be placed on the patient’s skin to indicate the route to and the depth of the implanted reflector. During surgery, the wand is then positioned repeatedly in the incision to indicate the distance to this device, which ultimately is removed along with the surrounding tissue.

Rather than relying on an external source transmission, Mammotome’s Sentimag probe detects magnetic fields emanating from its implanted Magseed markers or injected Magtrace Liquid. Magseed is used to localize breast tissue that the surgeon intends to remove; the liquid tracer is designed to help find the sentinel lymph node to which the breast cancer may have metastasized.

When using the liquid tracer, the magnetic field allows the surgeon to home in on the lymph node; its dark color offers visual confirmation during the surgery. The current standard for identifying sentinel lymph nodes involves injecting a radioactive technetium tracer and a blue dye, according to Jodi Hafemeister, senior manager for product and marketing performance for tissue acquisition solutions at Leica Biosystems (Mammotome).

“If you want to see if the cancer has spread to the lymph node (and) you don’t know which lymph node to check, you have to map it,” Hafemeister said. “This is a radioactive-free option.”

Expanding The Use Of Markers In Breast Conservation

Numamoto said the use of wireless localizers in patients seeking breast conservation is entering a new phase of advanced utilization. One such example may involve the placement of wire-free markers before the administration of chemotherapy or radiation. Early placement may be indicated, he said, because such neoadjuvant therapy can shrink the breast tumor, making it difficult to localize.

Savi Scout might also be implanted at the time of biopsy, according to Numomoto, if a suspicious lesion has a high likelihood of cancer. Meanwhile, the company is continuing to evolve the Scout product, for example, making the diameter of its handheld wand smaller so that it can be inserted into less intrusive incisions that minimize scarring.