Greater anatomical and functional definition of tumors, as well as dose sculpting capabilities, are driving the use of magnetic resonance imaging in radiotherapy treatment planning. 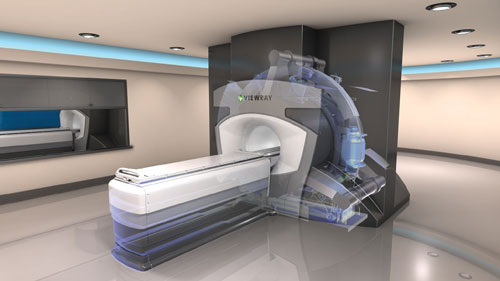 The MRIdian from Viewray is a hybrid MRI-guided radiotherapy system. Elekta and Philips are currently working on a joint venture, which they hope to launch in 2018.

Computed tomography (CT) has long been the gold standard for image acquisition during radiation therapy treatment planning, as the ability to visualize tumor position and volume in 3-D is integral for prescribed dose calculations. As radiation therapy continues to become more precise, however, through advanced methods like proton therapy, intensity modulated radiation therapy (IMRT) and others, CT image quality is often not high enough to create effective treatment plans that maximize dose only to the tumor. As a result, many radiation oncologists are turning to magnetic resonance imaging (MRI) due to its superior soft tissue visualization.

MRI can be beneficial for treatment planning as both an anatomical and a functional imaging technique, as described during the scientific session “MRI: Imaging for Treatment Planning” at the 2015 Radiological Society of North America (RSNA) annual meeting in Chicago. Eric Paulson, Ph.D., assistant professor, Department of Radiation Oncology at the Medical College of Wisconsin (MCW), explained that only a few institutions are using MRI alone in a multimodality workflow. These, however, are mostly research institutions and the approach has little commercial support. But, he added that several vendors and research collaboratives have begun exploring MRI-guided radiation therapy systems, which allow simultaneous scanning and treatment.

At present, Paulson said MRI treatment planning is most often employed in a multimodality workflow following CT scans. The multimodal approach provides the best of both worlds using CT for dose calculation and the MR as a contrast supplement to help delineate tumor boundaries.

These high-contrast, rapid acquisition capabilities are especially useful in the abdominal region, one of the most challenging locations for radiotherapy, Paulson said. This is due to the multiple types of motion experienced — including respiration, peristalsis and the pulsations of the heart.

In his presentation, he demonstrated the benefits of improved soft tissue contrast via a case study of pancreatic cancer, where an oncologist will need to delineate the different segments of the pancreas as well as the proximity of the duodenum. The duodenum has a maximum dose toxicity of approximately 50.4 Gy, while the pancreatic tumor may require a higher dose, Paulson said.

One solution is to utilize respiratory triggering to determine the most appropriate time for image acquisition during the respiratory cycle. Traditionally the cycle is monitored with respiratory bellows, but Paulson’s team at MCW utilizes a one-dimensional navigator, placed at the interface between the liver and the lung. This allows the team to extrapolate a waveform from the patient’s breathing that directly correlates to respiratory motion, a finding that can be used for gating of a T2-weighted image that clearly delineates the duodenal wall. “You get some help with administration of contrast, but not a lot compared to what you get with the T2 weighted image,” said Paulson.

One of the emerging applications of MRI is in treatment planning for breast cancer, particularly brachytherapy. A number of studies have been published supporting this indication, including patients with dense breast tissue, small lumpectomy cavities, and patients who have experienced a long delay between surgery and the start of radiotherapy.

DWI evaluates the movement of water protons, which may be restricted in the densely compact cell structure of a tumor. Movement is measured by the apparent diffusion coefficient (ADC), which can be used to evaluate the microanatomy as well as gauge treatment response.

Beyond detecting the presence of cancer, van der Heide noted that several studies have suggested the ADC may have some predictive value of response to chemo-radiation for brain, head-neck and rectal cancers. One particular study from 2002 examined the ADC of rectal cancer patients and found that those with a low initial (pre-treatment) ADC had a higher rate of regression in tumor size after chemo-radiation than those with a high initial ADC.
A separate study of head and neck cancers in Belgium appears to confirm this, as patients whose ADC went up following two weeks of chemo-radiation demonstrated better outcomes than those who did not.

Conversely, DCE-MRI tracks tissue perfusion and the permeability of the microvasculature. The key indicator for DCE-MRI is k-trans, a measure of the accumulation of contrast agent in the tissue. “Essentially you inject contrast agent and then you start to image the patient very frequently — every couple of seconds — so you can follow the tracer kinetics, which you can model,” said van der Heide.

Like with the ADC, there is evidence that k-trans values may have prognostic value in terms of radiotherapy outcomes — several small studies have found a correlation between a higher k-trans value pre-treatment and positive outcomes for patients with head and neck cancers, as well as cervical cancer.

Whether using DWI, DCE-MRI or another similar technique, the functional information derived may be beneficial
in determining the dose distribution, a concept
van der Heide calls dose painting. There have been an increasing number of clinical trials in recent years examining the concept with different imaging modalities but primarily focused on DCE-MRI and PET with the FDG radiotracer. “In a research setting we are there; but in clinical routine we are not there yet,” said van der Heide.

One study that is particularly interesting is the ARTFORCE trial, currently underway at The Netherlands Cancer Institute. Head and neck cancer patients are randomized into two groups: One group will receive a homogeneous radiation dose across the entire tumor, while the other group will receive a boost to the FDG-positive portion of the cancer, “because the assumption is that that is the more active part of the tumor,” van der Heide said.
A similar study is being conducted using DCE-MRI at the University of Michigan.

While it offers numerous advantages for treatment planning, MRI does have its limitations compared to CT. Most importantly, MRI scans are more prone to image distortion, which can come in two forms:

• 3-D gradient non-linearity distortion: This type of distortion results from issues with magnetic field strength, and can cause spatial distortions and blurring at the edges of an image in all three planes. Paulson stressed the importance of making sure the MRI system’s software is equipped to correct these types of distortions. “It can be set up to run automatically following reconstruction,” he said. He also noted that residual distortions should be characterized for each system.

• Off-resonance distortions: These originate from the patient, either due to fat/water shifts in the area in question or through magnetic susceptibility issues related to density differences (e.g., between tissue and metal or bone). Using a higher receiver bandwidth can eliminate most of these types of distortions. Paulson also suggested overlaying a voxel shift map on the image during delineation.

System users should also be aware of what type of immobilization device they are using, as certain materials can create their own susceptibility distortions. Paulson and the MCW conducted a study of 30 different materials commonly used, and found G-9 fiberglass to be the optimal choice based on the amount of geometric distortion caused. “You may find that materials optimal for radiation therapy may not necessarily be optimal for regular MRI use,” Paulson said.

For radiation oncology departments looking to integrate MRI into their treatment planning processes, there are several factors that must be considered before opting for implementation:

• Dedicated or shared resource: Paulson believes either approach can work. He said it is a matter of how often the oncologists will want to get in there.

• Hardware: Paulson said large-bore MRI scanners are essential for radiotherapy applications to successfully immobilize patients in treatment position. The radiation oncology team must also consider whether they want a conventional scanner or a hybrid system such as the MRIdian from Viewray, the only MRI-guided radiotherapy system currently available on the market. (Elekta and Philips are in the midst of a joint project to create their own system, which they hope to launch in 2018.)

• Ancillary equipment: To facilitate ideal treatment planning conditions, the system should include MR-compatible immobilization devices and a flat, indexed couch top to match the same flat tops used on the radiation therapy systems.