Molecular breast imaging rivals FFDM for dense breasts, but will it be readily adopted?

These photos provided by the Mayo Clinic show dense breasts, which mammograms don't penetrate well. The left image is a 50-year-old's digital mammogram, showing no problems. The right image is that same woman's MRI, showing what turned out to be an early

X-ray mammography is considered the “gold standard” for breast cancer screening in the breast imaging equipment market. The procedure is generally seen as the most effective option for women needing a diagnosis of any abnormalities in the breasts. However, with recent advances in other diagnostic breast cancer tests, such as breast MRI and molecular breast imaging, mammography may slip from its golden status.
Widespread Application
Mammograms aren’t necessarily the most effective but rather, the most available method for diagnosing breast cancer. While the analog segment in mammography continually declines in revenue growth – revenues are based on manufacturer revenues from sales of equipment to hospitals, private radiology practices, clinics and imaging centers – substantial growth is seen in full-field digital (FFDM) X-ray mammography, which is still a driver in this segment. Indeed, according to Frost & Sullivan’s discussions with hospital facility procurement officers, FFDM is certainly deemed a “priority” purchase in 2009.
The total North American breast imaging equipment market was $910.3 million in 2007. X-ray mammography contributes to 67 percent of this figure, and is expected to maintain this healthy dominance in the total breast imaging market going forward.
However, given recent trends and the results of some highly anticipated studies, mammography may at some point yield to some more sophisticated – and more accurate – methods for detection of cancers in women.
New Rivals to Mammography
Granted, mammography has its competition: breast magnetic resonance imaging (MRI), nuclear breast imaging and breast ultrasound. However, new promise is seen in molecular breast imaging (MBI), a new experimental method that is currently in advanced testing at the Mayo Clinic in Rochester, MN. MBI reveals more tumors and gives fewer false positives, when compared to mammography.
In the largest study ever to compare MBI to mammography, researchers have shown that MBI can detect three times as many cancers in women who have dense breast patterns (as seen on pg. 37) and are at increased risk of breast cancer (due to personal or family history or a previous precancerous condition).
In the MBI procedure, women are given an intravenous dose of a short-acting tracer that is absorbed more by abnormal cells than by healthy ones. Special cameras then collect the “glow” these cells give off, and doctors examine the picture to spot tumors.
The results of the study were presented the first week of September at the American Society of Clinical Oncology’s 2008 Breast Cancer Symposium in Washington, D.C. A follow-up clinical study comparing MBI to MRI is next; these results should be interesting, as MBI is more expensive than mammography, yet only one-fifth the cost of breast MRI.
But an MBI is not necessarily for every woman. Rather than replace mammograms for women at average risk for cancer, MBIs might become an additional tool for higher-risk women with a lot of dense tissue that makes tumors hard to spot on mammograms and at a lower cost than MRI (about one-fourth of women 40 and older have dense breasts). With an aging population, this translates to a larger market of higher-risk women, thereby making the availability of MBI an attractive option for a hospital or clinic.
Cost of Improving Detection
Cost, of course, is always an issue. More advanced, digital systems can cost nearly five times that of an existing system, and without ample data from multiple studies and rather limited success stories, buyers may be reluctant to make a spend. This is certainly true for private radiology practices that need to manage costs very tightly.
It is costly for manufacturers too. GE Healthcare or Siemens Medical Solutions would only consider producing such systems if a sizeable enough market could exist. Adoption of MBI monitors perhaps might be slow at the beginning, but as hospitals rush to purchase state-of-the-art equipment, GE and Siemens could eventually realize profit. Additionally, manufacturers can harness the power of their education, training and support communities to drive incremental revenues from training hospital personnel – perhaps staff mammographers or sonographers – in the use of the MBI system. 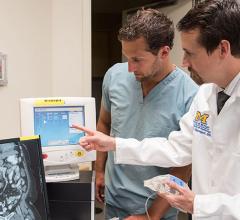