Importance of Visual Checks Before Mammograms 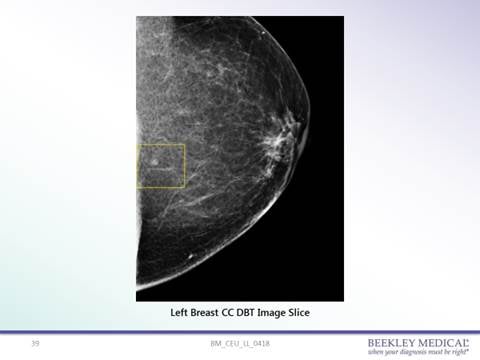 62-year-old female patient presenting for 3D screening mammogram. Location of an indeterminate low-density circumscribed mass was not clearly determined as at the skin line or just under the surface.

In recent years there has been a lot of debate about the role of the mammographer with regard to examining the patient’s breast. There are in fact two types of breast examination — the clinical breast examination (CBE) and the breast self-examination (BSE). Both of these are now controversial with many organizations including The American Cancer Society (ACS) and The Journal of the American Medical Association (JAMA),1 suggesting that breast exams, either from a medical provider or self-exams by the patient, are no longer recommended. Mammographers are not clinicians and therefore they cannot conduct a clinical breast examination. However, the mammographer is often the only link between the patient and the radiologist. The information that the mammographer does or does not convey can aid in diagnosis and the action, or lack of action, which can have repercussions.

In addition to performing the actual mammogram, the mammographer needs to be a compassionate and skilled communicator. The aim is for the patient to have a pleasant experience that will be more likely to ensure compliance either with follow-up studies or the annual examination. The key is communication. Communication can be listening, encouraging comments or face-to-face questions. These face-to-face questions can be vital. The mammographer must communicate with the patient before, during and after the examination. Communication can give the mammographer a chance to educate the patient, alleviate fear or anxiety, clarify misconceptions or identify sensitive breasts and the reason for the sensitivity. All this can help the patient relax, which in turn will allow easier positioning. Communication is also the means by which the mammographer conducts a patient clinical history interview and collects the data that must be conveyed to the radiologist.

This interview should be as informal as possible and include not just a breast examination, but a visual inspection and check of the breast as well. Many facilities now incorporate this clinical history in the form of a history sheet that is stored digitally with each patient’s medical records. This clinical history can be vital. A published study found that radiologists who usually or always referred to the clinical history when interpreting screening mammograms have a lower false-positive rate, especially with younger women and women with denser breasts.2

Any clinical history information should include the following:

•    Documentation on any family or personal history of breast cancer. Family history generally refers to close relatives such as mother, sisters or grandmother. A strong family history can indicate a higher than normal risk factor for breast cancer.

•    History of breast surgery. All biopsies, lumpectomies, augmentations or reductions should be documented. The mammographer should be careful to collect accurate data. For example, a lumpectomy should only be documented if the patient had a cancerous lesion removed. Biopsies should not be confused with lumpectomies, and if the result of the biopsies are available this should be noted. Documentation should include the date of each surgical procedure.

•    History of breast trauma. Past breast trauma can result in a hematoma that could present as a palpable lump. Documentation can avoid unnecessary follow-up studies.

In addition to completing the clinical history the mammographer needs to perform a visual check of the breast. This is not a breast examination but a check for any abnormality that can aid the radiologist in diagnosis.3 The following should be documented:

•    Any skin thickening. Skin thickening could be localized or involving the entire breast, and can indicate an underlying pathology but does not necessarily indicate breast cancer.

•    Dimpling or puckering of the breast skin. Pulling in on the skin can indicate an underlying lesion and should be documented.

•    Any moles, eczema or ulcers on the breast. It is important to mark skin lesions as these can project into breast tissue, mimicking or masking a pathology.

•    Any nipple changes. The mammographer needs to confirm any sudden changes to the patient’s nipple that could indicate an underlying pathology.

It is important that the mammographer identify moles, keratosis, skin tags or surgical scars on the skin surface and note the location of palpable lumps. The nipple should be marked especially when it is not imaged in profile. In such cases the nipple can be mistaken for a lesion. Marking the nipple is also valuable when calculating distances to or from a lesion for localization purposes. The best method of identifying lesions on the skin surface or in the breast is with the use of non-metallic markers. In this scenario, any radiologist viewing the images, anywhere in the world, can easily identify lesions either in the breast or on the skin surface.4,5

Another consideration is the standardization of the marking system. All mammography facilities should develop a standard marking system protocol using commercially produced skin markers. A skin lesion should be clearly identified and differentiated from a palpable lesion. There have been reports of false-negative interpretation because of poor or non-standardized marking system. In a reported case, the mammographer used a small round pellet “BB” marker placed on the skin to indicate a palpable lump. The radiologist assumed that the pellet “BB” marked a skin lesion that resulted in a false-negative interpretation.6

A survey taken in 2017 showed that there has been progress made in the standardization among mammography facilities regarding the shapes that are used to visually communicate the location of the nipple, palpable masses, post-surgical scars, raised moles and areas of concern. Findings show:

•    93 percent used a circle for raised skin lesions; and

The most variance of protocols occurred within the shape used to mark “areas of concern” with a mix between a square (18 percent) and a triangle (41 percent). The suggested industry use is a triangle for all palpable masses, and the square for non-palpable areas of concern/points of pain.5

Improving standardization can lead to fewer misinterpretations with resultant lawsuits and can reduce confusion when a patient travels and takes images to different facilities.6

In addition to placing a marker on the breast there should be corresponding documentation in the patient clinical history. The dual documentation will reduce the risk of errors and avoid potential lawsuits.

Olive Peart is an established author, educator and radiographer. She graduated from a hospital-based radiography program in Jamaica, Wisc., and later obtained a master’s degree in education from the University of Bridgeport in Connecticut. Peart has authored several textbooks including The Dangers of Medical Radiation; Spanish for Professionals in Radiology; Mammography and Breast Imaging: Just the Facts; Lange Q&A Mammography Examination; Mammography and Breast Imaging Prep; and Radiography Flashcard. Although she currently works as a program director, she still enjoys the patient contact as a practicing mammographer and regularly presents lectures on mammography and other radiography-related topics at seminars throughout the United States and Canada, plus internationally via webinars.

4.    Taddese, KS. The Use of Skin Markers in the Performance of Mammography:  A Survey of the Tendencies and Protocols of Breast Imaging Facilities in the United States.  Radiological Society of North America 2008 Scientific Assembly and Annual Meeting, February 18 - February 20, 2008 , Chicago IL. Available at: http://archive.rsna.org/2008/6011800.html. Accessed October 23, 2017

5.     Survey analytics provided by Prestige Market Research based on results of a 2017 Mammography Skin Marking Survey