Knowledge of one's fibroglandular breast density is important, because high density increases the risk of cancer and decreases the accuracy of mammograms 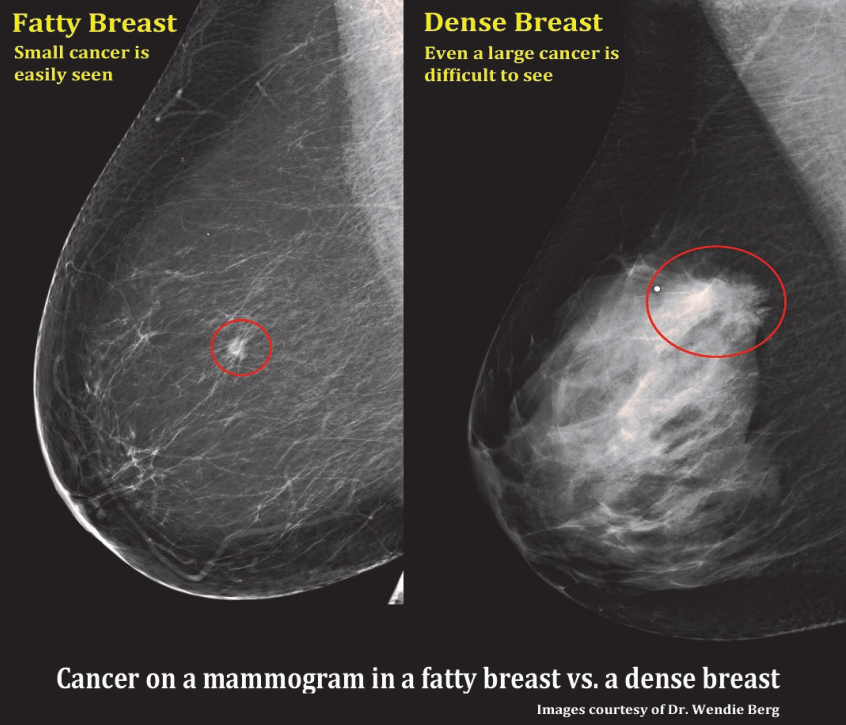 A comparision of a small breast cancer found in a patient without dense breast tissue (left), and a tumor found in a woman with dense fibroglandular tissue. For more information visit DenseBreast-info.org.

There has been much talk in the news lately about mammographic breast density, its association with the risk of breast cancer and legislative efforts to mandate reporting it to patients. This article addresses the reasons why breast density has become such a hot-button issue and what we might expect from this topic going forward.

In 1976, John Wolfe proposed a four-tiered classification of mammographic breast parenchymal patterns, after he had noticed a strong association between parenchymal pattern and breast cancer risk. The more complex (and generally denser) the parenchyma, the higher the risk of subsequent breast cancer. His top category had a breast cancer risk that was 31 times higher than that of his bottom category. Although subsequent analysis concluded that this quoted risk was vastly overstated, experts still considered the density-cancer connection to be valid.

In the early 1990s, researchers studying breast density (rather than parenchymal patterns) found that density itself was a predictor of breast cancer risk. This was the basis for the American College of Radiology’s decision to incorporate a four-tiered breast composition rating as part of its Breast Imaging Reporting and Data System (BI-RADS). The four current categories are:

Dozens of studies that have evaluated the association between breast density and breast cancer have found a four-to-six times greater likelihood of developing cancer in the densest category than in the least dense category.

Watch a video interview on breast density from NCoBC 2016

Other Problems with Dense Breast Tissue

Dense breast tissue not only elevates the risk of breast cancer, but also makes it harder to detect mammographically. Cancers, which are white on mammograms, become hidden on a background of dense tissue, which is also white. Whereas the sensitivity of mammography for showing breast cancer is 98 percent for fatty breasts, it drops to only 48 percent for extremely dense breasts. In other words, only half of all breast cancers are visible on mammography when the breasts are dense. Another problem is that women with dense parenchyma are more likely to have breast pain or longer mammography exposure times, both of which can lead to blurry mammograms as a result of patient motion.

Read the 2015 article "Making Sense of Dense Breasts," which discusses new technologies that are available to image dense breasts.

How Can We Improve Breast Cancer Detection in Dense Breasts?

In the multicenter Digital Mammographic Imaging Screening Trial (DMIST), digital mammography was significantly better at showing breast cancer in pre- and perimenopausal women younger than 50 years with dense breasts than analog mammography. Thus, younger women with dense breasts should strive to have their mammograms done on digital units.

The American College of Radiology Imaging Network (ACRIN) conducted trial #6666 (Screening Breast Ultrasound in High-Risk Women) at multiple sites worldwide, including the author’s imaging center. Among women at elevated risk for breast cancer and with >50 percent breast density, the addition of breast ultrasound to mammography increased the cancer detection rate by 55 percent, but with more than double the false-positive rate. The addition of a single breast magnetic resonance imaging (MRI) exam at the end of the study doubled the cancer detection rate over that of mammography plus ultrasound, but also with a further increase in the false-positive rate.

The American Cancer Society currently recommends screening breast MRI for women with at least a 20 percent lifetime risk of breast cancer. Approximately 2 percent of U.S. women would meet this threshold. However, because the various breast cancer risk calculators do not consider breast density, the number of women who could qualify for MRI screening would be higher if density were included.

Other options for evaluating dense breasts include breast-specific gamma imaging (BSGI), also known as molecular breast imaging, and positron emission mammography (PEM). Although these tests use ionizing radiation, they have one notable advantage over ultrasound and MRI — their low false-positive rates result in fewer unnecessary biopsies.

Breast Density in the News

In recent years, breast cancer advocacy groups, such as the aptly named AreYouDense.org, have been spreading the word about the problems associated with dense parenchyma. They also have spotlighted many women who felt that their cancers would have been detected much earlier had they been told of their dense breast tissue.

These efforts have been covered widely by the mainstream media. In 2010, the Los Angeles Times said of breast density, “It just might be the greatest cancer risk you’ve never heard of.”

All this media attention prompted legislators to take action. In 2009, Connecticut became the first state to require that patients be informed of their mammographic breast density and that insurance policies cover screening breast ultrasound for patients with greater than 50 percent density. Since then, Texas and Virginia have also passed breast density notifications laws. Similar efforts are under way in numerous other states. Insurance coverage has been required in Illinois since 2009, but without the requirement to inform patients.

At the federal level, the Breast Density and Mammography Reporting Act of 2011, sponsored by Rep. Rosa DeLauro of Connecticut, would require written notification to patients about their breast density and availability of supplemental screening tests for women with dense breasts. This House bill is currently under review at the committee level.

Although proponents of these laws argue that the more information patients have about their health, the better they can make informed decisions, many medical groups have voiced concerns. They point out that breast density is a subjective determination that varies from one radiologist to the next and even from day to day for the same radiologist. This can lead to confusion when patients are told that they have dense breasts one year, but not the year before or the year after. Did their risk actually change or was it just a different reader?

Opponents also worry that patients may clamor for additional as-yet-unproven tests that they read about on the Internet, thereby driving up heathcare costs at a time when our country is trying to find ways to contain costs. Because there is much that is unknown about the best way to handle dense breasts, there is valid concern for unintended consequences. Finally, it is possible that women who are told they have fatty breasts may get a false sense of security and have screening mammograms less frequently or not at all.

Read about the questions patients are most likely to ask regarding breast density.

It is clear that for breast density information to be useful and to address the concerns about variability, there has to be a better way to measure density, one that is more objective and reproducible. In older research studies, radiologists had to either draw the boundaries of dense tissue on clear overlays or arbitrarily choose a shade-of-gray threshold between dense and non-dense tissue on a computer monitor. These were certainly not easily reproducible.

More recent studies have used automated algorithms to determine the optimal threshold between dense and non-dense tissue on mammographic images. However, Kopans called into question the validity of using 2-D mammographic data to assess the density of a 3-D organ. He advocated the use of volumetric 3-D information for all future investigations.

Additional studies will need to be performed to determine whether automated, volumetric breast density assessments predict cancer risk better than subjective visual assessments. With a quantitative, standardized way of reporting breast density, there is now no reason not to incorporate density data into the numerous models that calculate breast cancer risk, especially since breast density is one of the strongest independent risk factors for cancer.

Mammographic breast density is one of the strongest independent risk factors for subsequent breast cancer, stronger than even age or family history. Having dense breast tissue not only increases one’s chances of developing breast cancer, but also makes cancers that do develop more difficult to detect.

Breast ultrasound, MRI and BSGI all increase our ability to detect small breast cancers in dense tissue, but also increase the number of  benign biopsies. Many state legislatures and the U.S. Congress have either passed or are working on laws to require that mammogram patients be informed of their breast density, so that they can seek supplemental testing, if desired. Two states now require health insurance to pay for this supplemental testing for women with breast densities in the top two density categories, encompassing roughly half of all women.

These mandates make it especially important that we have in place a standardized, reproducible way to measure and report breast density. Research continues on the best way to assess breast density and on what should be done with that information.

Thomas S. Chang, M.D., FACR, is a radiologist at Weinstein Imaging Associates, a specialty women’s imaging practice in Pittsburgh, Penn. The practice was a core participant in the American College of Radiology Imaging Network trial on screening breast ultrasound and breast MRI in high-risk women and was an early adopter of breast-specific gamma imaging/molecular breast imaging. Chang was president of the Mammographer’s Society of Pittsburgh and the Pittsburgh Roentgen Society and is now first vice-president of the Pennsylvania Radiological Society. He reviews manuscripts in breast and gynecologic imaging for the American Journal of Roentgenology.

New Technology and Clinical Data in Breast Imaging (articles from 2017)