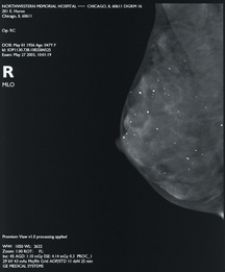 A digital mammogram (above) allows for greater clarity than a film-based mammogram.