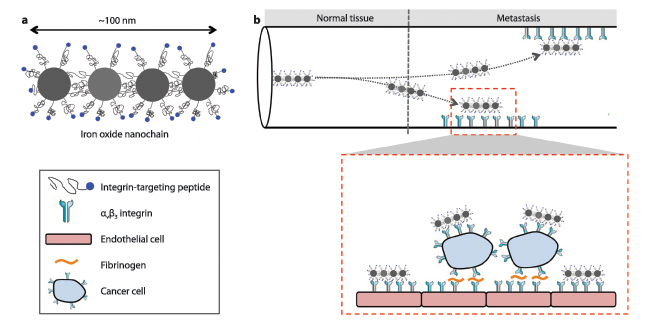 Figure 1. Illustration of (a) the iron oxide nanochain and its constituent components, and (b) targeting of the nanoparticles to a metastatic site. Inset: Interactions of circulating tumor cells and vascular bed.

Even though the vast majority of cancer mortality is due to metastatic disease, clinical practice indicates that current imaging tools are capable of detecting large metastases (about 0.5-1 cm in size), but rarely detect the early spread of metastatic tumor cells. Unfortunately, by the time cancer metastasis becomes clinically evident with today’s imaging techniques, the metastatic disease has progressed at a late stage prohibiting early successful interventions such as surgery or radiation. This late detection results in an unfavorable long-term patient outcome. For example, the five-year survival rate of breast cancer patients sharply decreases from 98 percent in cases with localized primary lesions to 23 percent in cases of distant large metastases.

To detect the early onset of metastatic disease using magnetic resonance imaging (MRI), we developed an imaging agent capable of identifying changes in molecular information rather than anatomic changes. The imaging agent consists of an oblong-shaped iron oxide nanoparticle that looks like a nanochain targeting a specific biomarker that is associated with early development of cancer metastasis. Compared to any previously designed imaging agents, the shape and flexibility of the nanochains make them continuously escaping the blood flow and scavenging the vessel walls for a biomarker that indicates endothelium colonized by metastasized cancer cells. So how does that enable detection of micrometastasis?

Targeting micrometastasis hidden within a large population of normal cells presents a unique challenge, which is impeded by several biobarriers, including the small size and dispersion of micrometastases to organs, making them less accessible to imaging agents. However, metastasis upregulates specific cell-surface molecules that differ from the rest of its host organ. Importantly, metastatic cancer cells residing inside the lumen of blood vessels precede the formation of large (extravascular) metastatic tumors. These intravascular cancer cells continue to proliferate by producing their own microenvironment. Specifically, expression of alpha(v)beta(3) integrin is functionally linked to the development of metastatic disease at a distal site. Attraction of circulating tumor cells to a metastatic site is based on firm attachment that is mediated by alpha(v)beta(3) integrin on both cancer and endothelial cells. Thus, successful imaging of the overexpression of this marker on blood vessel walls should facilitate early detection of metastatic disease.

To home in on the cancer marker, the surface of the oblong-shaped nanochain is decorated with a high number of targeting chemical moieties, which specifically bind the alpha(v)beta(3) integrin. This imaging agent is specifically designed to take under consideration the microenvironment of the targeting site. The nanochain particle is made of different nanospheres connected one to another much like a stack of Legos. As Figure 1(a) illustrates, we chemically link four nanospheres made of iron oxide into a linear 100 nm-long nanochain. The detection specificity and sensitivity were substantially increased by shaping the imaging agent with the “appropriate” geometry. What does appropriate mean? The geometry of the nanochain results in three unique features that facilitate detection of micrometastasis as shown in Figure 1(b). First, an imaging agent such that should be able to drift out of the blood stream and reach the blood vessel walls. While spherical nanoparticles tend to go with the flow, the nanochain tumbles out of the main current and skirts along vessel walls, where attached integrin-binding molecules can latch on to sites bordering tumors. Second, the high aspect ratio and flexibility of the nanochains substantially increase their probability of homing to metastases due to geometrically enhanced multivalent docking to the walls of blood vessels associated with metastasis. The “flat” surface of the nanochain makes the nanoparticle very “sticky” to its target sites. Compared to conventional spherical nanoparticles, the nanochain exhibits an at least 10-fold higher attachment onto diseased endothelium colonized by metastatic cancer cells. And third, the arrangement of iron oxide in this manner generates a substantially higher signal for detection by MRI. Indeed, our recent studies have showed that the synergy of these three features substantially increases the likelihood of early detection of very small breast cancer metastatic lesions (<2 mm in size) in the liver, lungs and spleen.[1]

In conclusion, the treatment decisions of metastatic disease heavily depend on diagnostic tools to detect the precise location and extent of disease dissemination. Due to the unique material properties that appear at the nano-scale, nanoparticle technology provides many potential benefits and new opportunities to address the complexity of metastatic cancer. We designed an imaging agent to target cancer cells that colonize the endothelium of blood vessels associated with micrometastasis, which is the initial step of the arrest of circulating tumor cells within the microvasculature of target organs, before metastasis grows out of control and spreads widely throughout the organ. Such early detection can potentially facilitate early therapeutic interventions that are currently not available. For example, early detection can substantially improve the outcome of surgery, since the best outcome of surgical resection of metastases is achieved when there are only a few lesions localized in a single site. In addition to radiation therapy, new therapeutic strategies, such as thermal and radiofrequency ablation, require knowledge of the precise location of metastases. Or the same nanochain technology could be used to not only find cancer but also deliver anticancer drugs directly to micrometastasis before a tumor forms.  itn

Efstathios (Stathis) Karathanasis is an assistant professor of biomedical engineering and radiology at Case Western Reserve University School of Medicine. He directs the Laboratory for Nanomedical Engineering, which is part of the Case Center for Imaging Research and the Case Comprehensive Cancer Center.