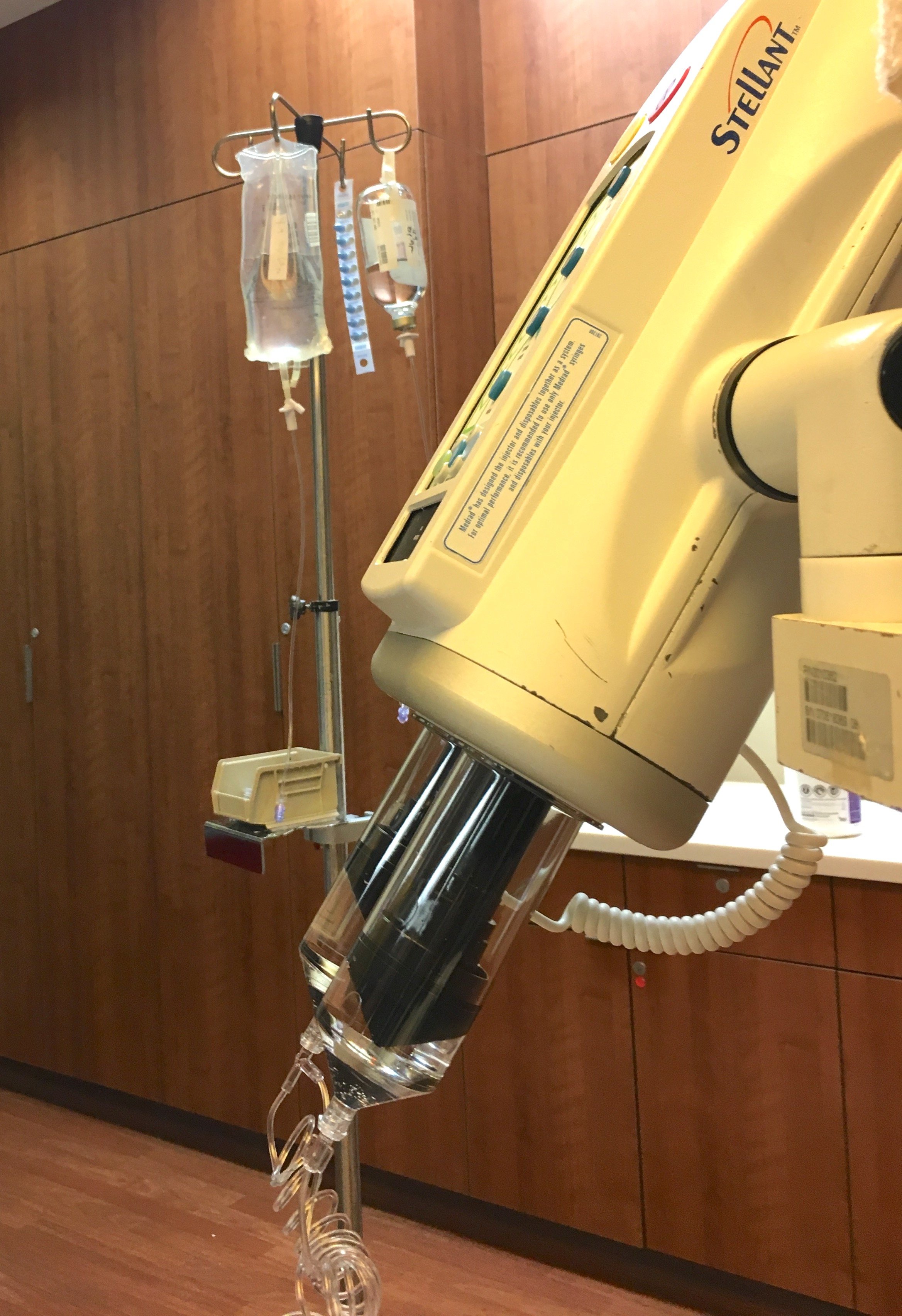 As of 2015, approximately 79 million computed tomography (CT) scans were performed each year in the U.S. Of those, 36 million, or nearly half, utilize contrast media, according to Ryan K. Lee, M.D., MBA, MRMD, magnetic resonance medical director, director of quality and section chief of neuroradiology for Einstein Healthcare Network in Pennsylvania. This is part of a growing trend in the U.S., where in 2016 there were 245 CT scans performed per 1,000 population. These numbers suggest that medical imaging generally, and CT in particular, will continue to grow in usage, and that practitioners should know how best to utilize these tools while maintaining patient safety. For CT scans, this means getting a handle on the risks of contrast extravasation, a topic which Lee discussed in a recent webinar, "CT Contrast Extravasation: Can it be Decreased?"

Extravasation is the leakage of intravenous IV fluid into the extravascular tissue surrounding the injection site. This leakage is usually caused by dislodgement of the IV cannula, contrast leakage directly from the puncture site or a rupture in the vessel wall. The 2018 edition of the American College of Radiology (ACR) Manual on Contrast Media (version 10.3) notes that the reported rate of CT contrast extravasation is between 0.1 and 1.2 percent.1 While this may seem like a small range, it could still mean 36,000-432,000 incidents, a significant number.

The most pressing danger of extravasation is the toxicity of the contrast itself to the surrounding body tissue. According to Lee, contrast agents are toxic due to the hyperosmolarity of the solution. At too high a concentration, the agent can provoke an inflammatory response leading to numerous complications for the patient, including skin ulceration, tissue necrosis and, most significantly, compartment syndrome — a painful condition caused by pressure buildup in muscle tissue.

Aside from patient health complications, extravasations can also lead to many downstream disruptions for patients and staff. “Certainly this will decrease the workflow, and potentially bring it to a halt: in radiology, because you certainly can’t do another patient while you’re tending to this patient; in the ED, because if this patient isn’t getting the scan they need, that will back up how they’re treating and diagnosing the patient; and certainly in surgery they may not get the information they need,” said Lee.

As with any condition, certain patients carry greater risk of experiencing contrast extravasation. Some risk factors have been well-established in the literature, including:

•    Gender: Several studies have indicated that women
have a higher odds ratio for experiencing contrast
extravasation than men. A 2018 literature review in the
journal Medicine looked at five studies encompassing
276 extravasations for male patients and 354 for female patients — a rate of 0.14 and 0.19 percent, respectively.2 Interestingly, Lee noted that the literature does not show any difference in severity of extravasations between genders.

•    Age: Lee noted that the literature is somewhat mixed
on whether age plays a factor in extravasation risk
but generally suggests older patients are at greater
risk than younger patients. The ACR Manual on
Contrast Media recommends against restricting
contrast media use based on age due to only a
moderately increased risk for older patients.

•    Ultrasound-guided IVs: Ultrasound-guided IV
(USGIV) placement is frequently used for CT scans
in the emergency department (ED) when standard IV
placement is deemed too difficult. A 2016 study
reviewed six years of CT scans with IV contrast
at a single tertiary center’s ED to compare
extravasation rates between USGIV placement
and standard IV catheter placement. The
USGIV group (consisting of
394 scans) experienced a 3.6 percent
extravasation rate, while the standard IV
placement group’s rate was only 0.3 percent.3
Lee said that Einstein Healthcare Network has
discouraged the ED from using USGIVs
whenever possible.

•    IV location: The antecubital fossa (the pit of
the elbow) remains the most advantageous
site for administering a contrast IV, according
to Lee, due to the higher volume of tissue
present to absorb the contrast. Wienbeck et al
demonstrated that using the dorsum (back) of
the hand resulted in an extravasation rate twice
as high as the antecubital fossa.4

Other risk factors have been explored but have not proven as conclusive, Lee said.

•    Warming of contrast media: Some
practitioners warm the contrast media prior
to injection as this can be more comfortable
for the patient, and there is a question whether
this also reduces adverse event rates. A 2012
study found that the answer may depend on
the osmolality of the agent — extrinsic warming
did not appear to affect adverse event rates
for intravenous injections of iopamidol 300
of less than 6 ml/sec, but was associated with
a significant reduction in extravasation and
overall adverse event rates for the more viscous
iopamidol 370.

•    Paresthesia (a tingling or pricking sensation in
the limbs); and

If the symptoms only appear to be mild, applying either a hot or cold compress may help alleviate any issues. Lee said he tends to use hot compresses at the injection site to help improve absorption of the contrast by increasing the hydrostatic pressure. Cold compresses may be helpful in relieving pain.

“The hallmark of what we should be doing is when things get worse,” Lee said. “Any clinical sign that would have worsened is something we want to take seriously.”

For hospitals and radiology departments looking to reduce their extravasation rates, careful attention to risk factors can make all the difference, according to Lee. If a patient is considered high-risk for extravasation, staff should be sure to continually observe the IV flow and injection site, and remind the patient to report any problems they may observe.

Einstein Healthcare Network recently took further steps by investigating its own practices for opportunities for improvement. During monthly quality meetings, Lee and his staff noted a lower extravasation rate for cardiac CT angiography (CCTA) exams than other CT exams. At that point in time, the hospital performed hand injection of saline prior to contrast for all CT studies — except for CCTA; in those cases, saline was power injected. He noted that CCTAs are a small percentage of the imaging exams performed at Einstein, but he wanted to test whether pre-injecting a saline bolus by power injection would have an effect on contrast extravasation rates.

“We would rather extravasate saline into the soft tissue than IV contrast,” he said, noting that the saline would be reabsorbed quickly into the body. They switched to power injection of saline for all CT exams over a 30-month period, conducting almost 13,000 CT scans. The research team mimicked the conditions of power injection of contrast, using the same flow rate for 30 cc of saline. Findings showed that with the power injection, Einstein’s extravasation rates were cut by 53 percent. Lee acknowledged that while these conditions would not fully mimic contrast infusion, the results are still promising.