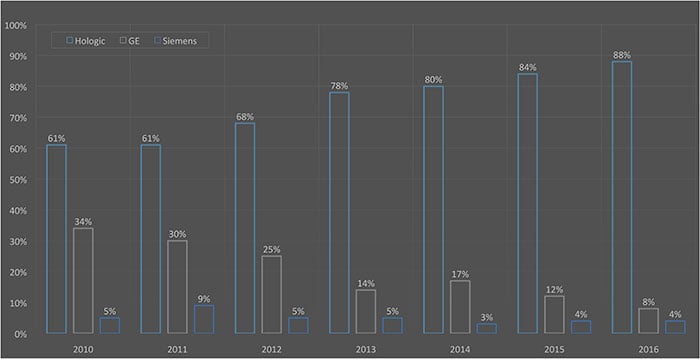 Before the introduction of 3-D digital breast tomosynthesis (DBT) imaging, 2-D full field digital mammography (FFDM) systems were the gold standard for breast cancer screening. However, during the past few years, DBT has become the new gold standard. Every major vendor within the mammography market either has a viable DBT solution or is in the process of obtaining U.S. Food and Drug Administration (FDA) clearance. In spite of concerns about increased radiation dose and higher price points for the technology, interest in 3-D tomosynthesis is still going strong.

With the growing number of DBT solution options as well as the continued clinical evidence supporting this technology, it is no surprise that most women’s imaging centers either have or plan to purchase this technology. Consistent with previous purchasing trends throughout the past several years, the market analysis firm MD Buyline seldom evaluates a purchase for a system that is not 3-D tomosynthesis capable.

Some readers may wonder at the inclusion of breast density in conversations about DBT. Breasts are made of breast tissue, connective tissue and fat. Breast density is a measurement of the breast and connective tissue to fat ratio. Women with more fat than tissue are considered to have low-density breasts, and women with more tissue than fat are considered to have high-density breasts. Breast density can also change over time; younger women tend to have denser breasts.

So why is this important in mammography screenings? Breast density is a significant factor for radiologists to consider when reading the images of a mammography exam because these studies are often harder to interpret. On a mammographic image, fat in the breast appears dark, and tissues are either light gray or white. However, cancerous areas are also white. Because dense tissue can mask cancer, breast cancer in women with dense breasts has the potential to go undetected.

With the introduction of DBT, the likelihood of a cancer going undetected is much lower. Unlike a flat 2-D FFDM image, DBT takes a series of images similar to a computed tomography (CT) scan, which allows radiologists to visualize individual slices of the breast and identify abnormalities that would have been obscured on FFDM images.

It is not only radiologists and technologists who are noticing the positive effect of this technology. Patients also notice the difference. We continue to hear of patients who are accustomed to receiving a dreaded callback for a follow-up procedure due to a suspicious area on their FFDM images. However, when they receive the DBT study instead, the phone seldom rings because DBT is better able to visualize the areas of suspicion and eliminate the need for a callback visit. These patients are ecstatic that they no longer have the burden of the yearly worry of possible breast cancer.

Last year, GE and Siemens received FDA approval and joined Hologic in the 3-D digital breast tomosynthesis market. At that time, Fujifilm Medical had submitted its first FDA premarket approval (PMA) module for its own tomosynthesis solution. A lot can change in a year, so below is a quick update.

Fujifilm Medical. On Nov. 14, 2015, Fujifilm Medical announced the submission of its second module for PMA approval. At that time, Fujifilm anticipated the submission of the remaining modules would occur within the next year, which was correct. On July 22, 2016, Fujifilm submitted its final module for PMA approval of an add-on tomosynthesis solution for its Aspire Cristalle system. At the time of this publication, the solution is still pending FDA approval

GE. GE gained FDA approval for the SenoClaire tomosynthesis option in September 2014. SenoClaire is an add-on feature to existing Senographe Essential and Senographe Care platforms. Although GE is considered a competitive vendor in this space, as with other vendors, its late arrival to the DBT market has created a challenge in gaining market activity.

Hologic. Receiving FDA approval in 2011, Hologic was the first to introduce tomosynthesis imaging to its mammography line of products. Since its introduction of the Selenia Dimensions Tomo, Hologic continues to provide enhancements to its DBT technology. Already a strong presence, this new technology helped Hologic gain an even stronger hold on maintaining its status as the market leader.

Siemens. The FDA granted approval for Siemens’ True Breast Tomosynthesis in April 2015. This solution is an upgrade to Siemens’ existing Mammomat Inspiration and Mammomat Inspiration Prime systems. In May 2016, Siemens announced that it was the first vendor to receive FDA approval to use its 3-D image as a stand-alone screening option. This further proves that the tomosynthesis image is superior to 2-D imaging. Like GE, Siemens is still working to gain market activity after a delayed entry into the U.S. DBT market.

2-D synthesized imaging. Although clinical evidence continues to support the benefits of 3-D mammography over 2-D imaging, increased radiation dose is still a concern. During a typical 3-D exam, both a 2-D and 3-D image is obtained, contributing to the issue of higher exposure rates. To combat these concerns, a solution has come with the development of 2-D synthesized imaging. 2-D synthesized imaging reconstructs a 2-D image from the 3-D dataset. Both the 2-D and 3-D images are read together. This replaces the need for acquiring a 2-D image during the exam. The 2-D images are labeled as synthetic images, not to be mistaken for true 2-D digital images.

Clinical studies have shown that the combination of the 3-D exam in conjunction with a 2-D synthesized image provides a higher level of image quality than a standard 2-D digital mammography exam alone. Thus, the patient receives the advantage of a 3-D exam with a lower exposure rate, better level of comfort and reduced exam time.

Biopsy systems. Although DBT is a game-changing technology, the advanced imaging features created some challenges for breast biopsies, specifically those performed on prone biopsy systems. When DBT first came to the market, prone biopsy systems still used FFDM technology. This meant that a patient could have a DBT study that identified a suspicious area, but when the patient was taken to the prone biopsy system for further evaluation, the FFDM image was not advanced enough to identify the original suspicious area seen on DBT. To combat this challenge, a large portion of centers opted for an add-on upright biopsy system. This way, they could use the same system to acquire the original image and perform the biopsy without any differences in image quality. However, on April 23, 2016, Hologic announced FDA clearance of the Affirm Prone Biopsy system. This system allows the comfort of a prone table with the 3-D imaging capabilities of the mammography system. Since its introduction, MD Buyline has seen a significantly increased interest in prone biopsy systems.

There have been numerous notable studies proving the advantages of DBT, including the Journal of American Medicine Association’s (JAMA) study released in June 2014 and the Malmö Breast Tomosynthesis Screening Trial published in April 2015.

More recently, a research article featured in the Bosnian Journal of Basic Medical Sciences in August 2015 noted that DBT not only is superior in detecting and characterizing breast lesions to FFDM, but also is superior to breast MRI.

Based on MD Buyline activity and customer feedback, we continue to see increased interest in DBT technology. We anticipate that it will continue to thrive as imaging centers replace older systems with this groundbreaking technology.

Rachael Bennett joined MD Buyline in 2008 with seven years of clinical experience in the medical field. She is the primary clinical analyst for linear accelerators, stereotactic radiosurgery, mammography systems, biopsy systems and other radiation oncology and women’s health capital equipment. She currently holds registries as both a radiographer and radiation therapist through the American Registry of Radiologic Technologists (ARRT).