Why Black Men's Prostate Cancer May be More Responsive to Immunotherapy 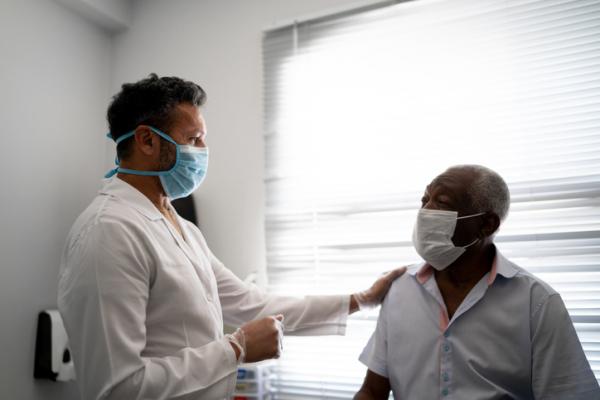 February 16, 2021 — Black men die more often of prostate cancer yet, paradoxically, have greater survival benefits from immunotherapy treatment. A new Northwestern Medicine study discovered the reason appears to be an increase of a surprising type of immune cell in the tumor. The findings could lead to immune-based precision medicine treatment for men of all races with localized aggressive and advanced prostate cancer.

In the new study, Northwestern scientists showed tumors from Black men and men of African ancestry have an increased proportion of a special immune cell called plasma cells compared to the tumors of white men. A research team lead by Edward Schaeffer, M.D., chair of urology at Northwestern University Feinberg School of Medicine and Northwestern Medicine, found this increase in plasma cells correlated with improved cancer survival following surgery and identify plasma cells as potential drivers of prostate cancer immune-responsiveness.

The study was published on Feb. 10 in Nature Communications.

"If a man's prostate cancer has numerous plasma cells, we found he had improved cancer survival," Schaeffer said. "Our study suggests plasma cells are important in the body's response to cancer."

Schaeffer's team explored this by analyzing the genomics of 1,300 tumor samples annotated with self-identified race or genetic ancestry. They found, on average, more plasma cells in Black men's tumors than white men's.

The finding was not unique to Black men, and the work showed that in all men with elevated plasma cell levels there was improved cancer-free survival following surgery.

"The finding comes at a time as researchers are discovering plasma cells may play a greater role in cancer immunotherapy than previously thought," said first author Adam Weiner, M.D., a Northwestern Medicine urology resident. "Testing for plasma cells in prostate cancer may help identify men who will benefit from immune-based treatments."

Schaeffer's research team at the Polsky Urologic Cancer Institute at the Robert H. Lurie Comprehensive Center of Northwestern University is now developing immunotherapy-based precision medicine clinical trials to investigate whether increased levels of plasma cells in prostate cancers from men of all races and ancestry can enhance the efficacy of immunotherapy and improved survival.

Prostate cancer is the second most common cancer in American men with an estimated 175,000 new cases every year and about 32,000 deaths. The severity and resulting mortality from prostate cancer are about two times greater in patients of African American origin.

Identification and characterization of effective therapeutic targets is a significant and unmet need to improve clinical outcomes and reduce mortality from lethal prostate cancer among African American men.