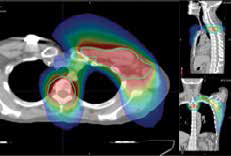 Radiation was delivered to the left chest wall, internalmammary chain, left supraclavicular fossa and medialaxilla of this patient with the TomoTherapy System.

The nonprofit healthcare provider Swedish Medical Center (SMC) has been serving the Seattle area for more than 100 years. It has locations in both the city of Seattle and its surrounding suburbs, providing care in specialty areas such as cardiology, neuroscience, orthopedics, pediatrics and more. An integral part of the community, Swedish is unique in that it offers both technologies from Accuray, the TomoTherapy System and the CyberKnife System, for treating cancer patients in the metropolitan region.

During its long history, the Swedish Cancer Institute at SMC used a variety of linear accelerators (linacs) to deliver focused radiation therapy to complex tumors. The institute selected the TomoTherapy System for its communitybased treatment center on the hospital’s Ballard campus, where the technology was installed January 2011. It was the first TomoTherapy System in the Seattle area and remains the only radiation therapy device in use at the Ballard center.

According to Daniel M. Landis, M.D., Ph.D., “TomoTherapy was selected for many reasons. It has allowed us to treat some patients where otherwise there would have been no way to safely treat them on a conventional linac.”

In the summer of 2012, a 52-year-old female, referred from another radiation center, presented with a large multifocal (ER+/PR+ Her2+) infiltrating ductal carcinoma in the left breast. She had previously undergone mastectomy and chemotherapy, followed by radiation to the left chest wall, internal mammary chain, supraclavicular fossa, medial axilla and the T2-T4 vertebral bodies.

“The ability to deliver highly conformal plans to complex tumors and avoid normal structures is extremely useful,” added Landis. He and his team selected TomoTherapy to “concurrently treat [the patient’s] oligometastatic lesion alongside the standard fields while maintaining safe dose volume constraints.” After the treatment, the patient developed no late effects and remained without evidence of recurrence at 24 months.

Sandra Vermeulen, M.D., is the executive director of the Swedish Radiosurgery Center at SMC, where the CyberKnife Robotic Radiosurgery System has been in use since 2006. The department treats approximately 250 patients with the CyberKnife System per year, according to Vermeulen. It is used exclusively for extra-cranial targets such as the breast, lung, spine, pancreas, liver, prostate and bone, as well as for intra-cranial targets where fractionation is required to protect normally sensitive structures, such as the optic chiasm.

“For all other intra-cranial targets, we allow the patient to choose the machine,” she said. “Nine times out of 10, the patient will choose CyberKnife.”

At Swedish Radiosurgery Center, the CyberKnife System was used to treat a 55-year-old female who was diagnosed with bilateral breast abnormalities after a routine mammogram. Bilateral lumpectomies were performed, and pathology confirmed an 8 mm ER/PR+ Her2/Neu- infiltrating ductal carcinoma in the left breast, and an 8 mm ductal carcinoma in situ on the right.

Concluded Vermeulen: “The CyberKnife technology has made a difference in patient care by decreasing treatment side effects, improving outcomes and cures, and enhancing the quality of life.”