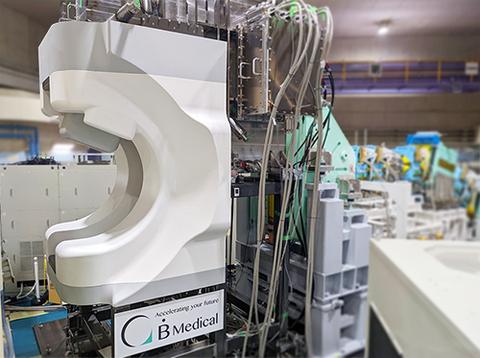 May 25, 2022 — B dot Medical Inc. and Research Center for Nuclear Physics, Osaka University (RCNP) have conducted a Proof of Concept (POC) of the ultra-compact proton therapy system under development and confirmed that the proton beam generated by an accelerator was bent inside the superconducting bending magnet in the system and irradiated to the isocenter (*1). That proves the feasibility of the development concept of downsizing the device and is a major step forward in improving access to cancer treatment with fewer side effects.

This POC was conducted as part of the International Joint Usage/Research Center program promoted by the Research Center for Nuclear Physics (RCNP) at Osaka University and is also the first experimental research using the upgraded AVF cyclotron beam at the Accelerator Facility of the RCNP. In the POC, the proton beam generated by the accelerator was passed through a superconducting bending magnet (*2) developed in-house, and it was confirmed that the proton beam was irradiated to the isocenter by being bent to an arbitrary angle in the bending magnet.