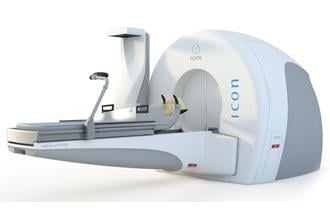 The study compared treatment planning capabilities of three radiosurgery delivery systems in 10 consecutive patients with single brain tumors who received treatment between 2014 and 2015 using volumetric modulated arc therapy (VMAT), a type of linac-based delivery. Radiotherapy data from these patients’ prior treatments were exported to the Gamma Knife[i] or CyberKnife[ii] treatment planning systems and re-planned for delivery with Gamma Knife, CyberKnife and VMAT modalities.

Treatment replanning was conducted in a blinded and independent fashion. The three systems were compared in each patient and assessed for dose distribution, conformity index (CI, a measure of the relationship between treated target tissue and untreated healthy tissue), gradient index (GI, a measure of dose decrease outside the target area), distribution of the prescribed radiation dose, and the volume of normal brain tissue receiving a radiation dose of 15 Gy, 10 Gy or 5 Gy.

“The results of this study demonstrate that the precise beam created by the fixed radiation sources of Leksell Gamma Knife results in significant tissue-sparing benefits to patients with large or complex brain tumors,” said Lijun Ma, Ph.D., DABMP, FAAPM, professor in the Department of Radiation Oncology at the University of California, San Francisco and senior author on the study. “Importantly, this benefit is achieved without compromising effective dosing to target tumor tissue.”

The study also underscores the differences in dose delivered to healthy brain tissue that can result when similar doses are delivered to the periphery of the tumor. Prior studies have shown the dose delivered to normal brain tissue increases steeply as tumor target size increases. Study results suggest that Gamma Knife reduces the dose to healthy tissue when using hypofractionated radiosurgery to treat large brain tumors. The authors note that further studies investigating the normal brain-tolerable dose of hypofractionated radiosurgery are needed to determine optimal dosing and fractionation practices.