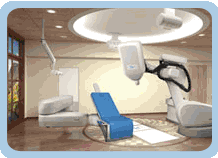 January 30, 2012 — Accuray Incorporated, a radiation oncology company, announced publication of a study demonstrating the benefits of the CyberKnife robotic radiosurgery system in treating central lung tumors. Historically, the treatment of central lung tumors using gantry-based stereotactic body radiotherapy (SBRT) has been challenging and required a great deal of accuracy to avoid risks of damaging critical structures, such as the airway, esophagus and heart, which can result in serious complications including death and leaving patients with fewer, less effective and sometimes only palliative options. This study, published in the January 2012 online issue of Radiotherapy & Oncology (commonly known as the Green Journal), demonstrated that the CyberKnife system, which leverages the Synchrony respiratory tracking system and lung optimized treatment to non-invasively track and correct for respiratory motion, allows clinicians to deliver lung SBRT to patients with central lung lesions with minimal toxicity, sparing surrounding healthy tissue, such as the esophagus, trachea and heart while also providing high levels of tumor control.

The study, "Outcome of Four-Dimensional Stereotactic Radiotherapy for Centrally Located Lung Tumors," reports on 56 patients (39 with primary lung cancer and 17 with metastatic tumors) treated with CyberKnife lung SBRT who were ineligible for surgery or chemotherapy, refused surgery or chemotherapy, or had an inoperable tumor. Local tumor control was 91 percent for the entire group at one year and 76 percent for the entire group at two years. The analysis of toxicity rates demonstrated that there were no serious complications, reporting no acute grade three esophagitis, no grade four (life threatening/disabling) or five (fatal) toxicities in the patients treated.

"In this study, we were able to achieve two-year tumor control and overall survival for centrally located lung tumors comparable to what is generally reported for SBRT treatment of peripheral lung tumors without putting patients at risk for complications or serious toxicities," said Joost Nuyttens, M.D., Ph.D., at Erasmus MC Daniel den Hoed Cancer Center in Rotterdam, Netherlands, and lead author of the study. "By taking advantage of the CyberKnife System's radiosurgical accuracy and image guidance capabilities, the Synchrony System allows us to track centrally located tumors as they move with respiration and correct for tumor motion throughout treatment. This allows us to deliver the high doses required to treat lung tumors without increasing the impact to surrounding healthy tissue, something that was difficult to do with gantry-based SBRT systems."