Some Rectal Cancer Patients Can Safely Avoid an Aggressive Operation 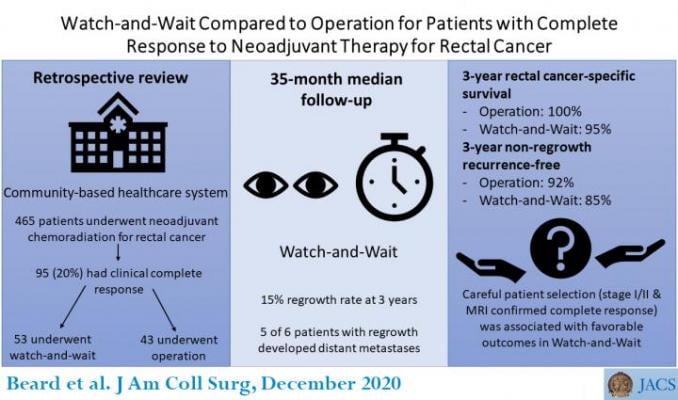 Watch-and-Wait Compared to Operation for Patients with Complete Response to Neoadjuvant Therapy for Rectal Cancer. Image courtesy of the American College of Surgeons

November 2, 2020 — A nonsurgical treatment option for rectal cancer that preserves quality of life is safe for carefully selected patients, according to a new study comparing it with the standard operation. The study results appear online as an "article in press" on the Journal of the American College of Surgeons website in advance of print publication and was presented at the American Society for Radiation Oncology (ASTRO) Annual Meeting.

In the United States, the standard treatment for most rectal cancers is triple therapy. Typically, patients first receive chemotherapy pills and radiation therapy at the same time before the main treatment--called neoadjuvant chemoradiation--followed by an operation to remove the rectum and surrounding tissues, and then intravenous chemotherapy to kill cancer cells. The new approach, called watch-and-wait (or watchful waiting), initially skips the operation, with regular patient monitoring for cancer recurrence.

"Rectal cancer surgery is very good for a cure, but it does have certain potential side effects: the ability to control bowel movements, bladder accidents, sexual dysfunction, and in up to half of cases, a permanent colostomy," said senior study investigator Vikram Attaluri, M.D., FACS, a colon and rectal surgeon, and assistant professor at Kaiser Permanente (KP) School of Medicine, Pasadena, Calif. "So someone could be living with a bag outside their body for the rest of their life, which has a huge effect on one's quality of life. Some patients have indicated they would rather live with cancer."

Rectal cancer is common--an estimated 43,000 new cases occur each year1--but eligibility criteria for watch-and-wait are strict. It is an option only if patients can return for follow-up visits and have no visible tumor several months after preoperative treatment, a so-called complete clinical response.

Attaluri estimates that less than 20 percent of patients achieve a complete response after chemoradiation. He said this percentage is increasing as more patients receive both chemoradiation and intravenous chemotherapy in the neoadjuvant setting (called total neoadjuvant therapy).

Despite favorable results of watch-and-wait in many studies,2 concerns exist that any remaining microscopic cancer cells could spread and lower survival rates.3 Therefore, the new strategy has not gained widespread acceptance in the United States outside clinical trials or specialized cancer centers, according to Bryce W. Beard, M.D., a fifth-year radiation oncology resident at KP Los Angeles Medical Center and lead study author.

"What is unique about our study is the community-based practice setting in a large integrative managed care organization," Beard said. "Our results, which are similar to those from past studies, suggest that watch-and-wait can be implemented on a broader scale."

The researchers reviewed the medical records of KP patients who underwent rectal cancer treatment between January 2015 and February 2019 at one of three Los Angeles-area radiation oncology centers. Patients had stages I to III rectal cancer (had not spread to distant organs), were medically fit for an operation, and completed neoadjuvant chemoradiation.

Of 465 patients, 406 had an assessment of their treatment response two to three months later. These patients underwent a digital (finger-guided) rectal exam and rectal imaging via endoscopy. Some patients also had rectal magnetic resonance imaging (MRI) to confirm the absence of tumor.

Three years later, all but six patients from the watch-and-wait group (11 percent) had no local regrowth of the cancer at the original site. All six patients had no evidence of a distant recurrence, and the tumor could be removed surgically, Beard said.

"The ability to perform curative-intent salvage, or rescue, surgery at the time of regrowth was quite good, indicating this approach seemed generally safe," he said.

Seven patients in the watch-and-wait group (including two initially) and four patients in the surgical group experienced a distant recurrence, with a lower likelihood of cure, which the researchers called "nonregrowth recurrence." On statistical analysis, the 85 percent rate of freedom from nonregrowth recurrence for watch-and-wait was similar to the 91 percent rate in the surgical group, Beard noted.

Disease-specific survival rates, meaning those who have not died of their cancer, also were statistically similar between groups: 95 percent for watch-and-wait versus 100 percent in the surgical group, according to the article.

Based on their other results, the investigators concluded that watch-and-wait appears to be safest in patients with stages I and II rectal cancer. Patients with stage III cancer were less likely to be alive at three years unless they received intravenous chemotherapy containing the drug oxaliplatin, the researchers found. They recommend rectal MRI to confirm a complete treatment response.

She recommends that patients who choose watch-and-wait receive monitoring every three months for the first two years, then every six months for years 3 to 5, and annually thereafter.