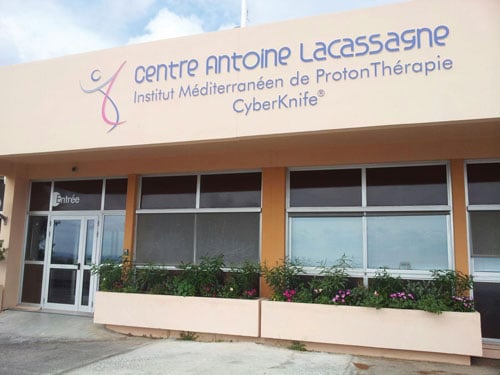 treatment planning system. The facility is one of only two proton therapy centers in France, and the first in Europe with the ProteusOne, IBA’s compact pencil beam scanning proton therapy system.

Today, CAL treats around 2,300 patients per year using a wide range of treatment techniques and systems, including photon therapy, TomoTherapy, SBRT, brachytherapy and CyberKnife robotic radiosurgery. With the ProteusOne, the center will also be able to deliver highly precise treatment for pediatric cancers, as well as for complex cases such as cancers of the head and neck or spinal cord. CAL anticipates that its proton therapy center will treat around 250 patients per year when up to speed.

Jérôme Doyen, M.D., a physician at CAL, said that expanding proton therapy capabilities was a natural step. “We felt we had gone as far as possible in improving the quality of photon therapy plans. Proton therapy will enable us to take precision to new levels. We are one of the pioneers in France, but the technology is becoming more accessible, and I am certain this treatment technique will expand to other centers during the next few years,” he said.

The proton therapy technique will enable the center to treat more complex cases, including radioresistant cancers such as chondrosarcomas and chordomas that need high radiation doses, for example up to 74 Gy. It will also make it possible to treat tumors close to organs at risk, for example in the base of the skull, or in areas where surgery is difficult, such as the spinal cord or intestines.

The precision of proton therapy is also valuable when treating children. “Not because we achieve better tumor coverage,” Doyen said, “But to reduce the integral dose to avoid long-term consequences such as radiation-induced cancers. Proton therapy also has been shown to reduce hormonal disorders over the long term. Some 10–20 percent of cancer patients could benefit from proton therapy, such as young adults with Hodgkin’s lymphoma or patients with left-sided breast cancers, among other indications.”

Robust optimization was a key reason for choosing RayStation as the treatment planning system for the new facility. RayStation’s robust optimization method takes geometric and dosimetric uncertainties into account, including interfractional movement and range and positioning uncertainties. It calculates for various possible scenarios, ensuring the plan is effective and accurate even when treatment conditions are not optimal. In proton therapy, this makes it possible to plan the dose for the CTV, instead of the PTV, which is generally used in conventional radiation therapy.

Gerard commented that as a pioneering cancer center, it is essential for CAL to ensure the ability to meet future needs. “RayStation is part of our long-term approach. We have a variety of treatment machines, and we needed a treatment planning system that would enable us to plan for all our treatment techniques in the future,” she said. “RaySearch releases new software versions every year that take user requests into account. It is great to work with such a responsive team.”

Another useful feature is RayStation’s scripting capability, which gives the flexibility to personalize the treatment planning system according to the center’s needs and workflow.

Marie Vidal, a medical physicist at CAL, added that setting up RayStation for the ProteusOne system was more straightforward than expected. “We thought we would have to adjust the beam model when commissioning RayStation for this new synchro-cyclotron technology, but it was a one-shot modeling. We got very good results and high precision on Bragg peak and spot measurements, as well as for flatness, symmetry, penumbra and size of lateral fields.”

Vidal added, “We are also looking forward to running our dose calculations in the Monte Carlo algorithm for particle therapy, which is coming in the next release later this year.”