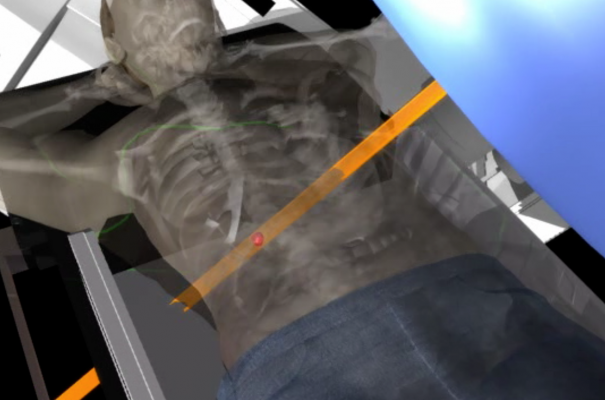 April 16, 2014 — Researchers at Thomas Jefferson University have tested an experimental cancer vaccine in combination with radiation therapy in mice with colorectal cancer. In research published online in the International Journal of Radiation Oncology, they showed the vaccine was most effective when tumors were irradiated first and then vaccinated a week later.

Not only does radiation therapy force cancer cells to self-destruct, but several studies demonstrate that it also activates the immune system to attack tumor cells. This activation can be used to boost current immunotherapies, such as anti-tumor vaccines, to produce better clinical results. What's less clear, however, is exactly how to combine the two therapies to get the best bang for the therapeutic buck.

"Prior to these experiments, we didn't appreciate the impact that sequencing of these treatments had on their combined ability to generate immune and clinical responses," says Matthew Witek M.D., radiation oncologist at Thomas Jefferson University and first author of the study. "Remarkably, immune activation and tumor regression only occurred when radiation was given prior to vaccination."

When mice received either treatment alone, the researchers noticed only a modest reduction in tumor size. However, when radiation was given first, the investigators saw a six-fold increase in cancer-fighting immune cells, and impressively, complete remission of the majority of tumors.

Although the work will need to be reproduced in humans to determine if the same holds true for cancer patients, the finding is exciting, says lead researcher Adam Snook, Ph.D., an instructor in the department of pharmacology and experimental therapeutics. "In a patient population that will undergo radiation therapy as standard treatment, these results provide a roadmap to amplifying the effects of immunotherapies like the one we're developing for colon cancer."

Targeted Diagnostics & Therapeutics Inc, which provided research funding that in part supported this work, has a license to commercialize inventions related to this work. The authors reported no other conflict of interest.